With religious restrictions lifted in Russia Evangelists are making the biggest impact among churches looking to fill a spiritual void.

Freedom of religion in post Communist Russia means that Roman Catholics have established a presence, but the local Russian Orthodox Church feels under siege from American fundamentalists and Evangelical churches

With travel restrictions relaxed, Evangelical Christian churches are flooding Russia’s spiritual market. Having set their sights on converting the masses, they use many ways to attract would be believers. One Russian Orthodox priest sees it as a shot across the bows,

They use their power to buy up time on our television stations. We don’t have anything like that capacity.

Benefiting from Russian fascination with America and western lifestyles the ministry of these new Christian churches is not centred around ceremonies and devotions in a chapel, but prayer meetings and Bible study groups in people’s homes,

It’s a style that doesn’t depend on the old traditional method.

They have no answers; they have nothing to say any more than just the proclamation of Christ. 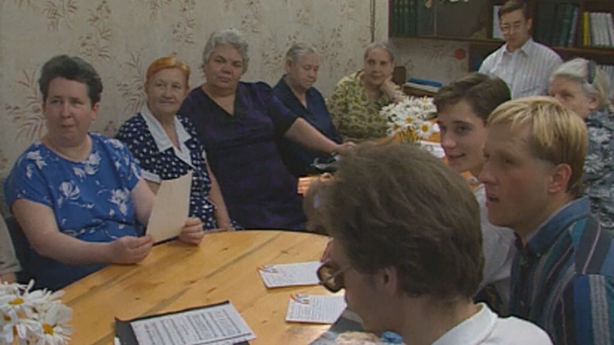 Fr Khmelnitsky is also amazed at the simplistic fashion these new groups use to attract followers. Absolutely no attempt is made to localise their message or methods,

They come here without even trying to understand the mentality and the culture of the country and the people.

The American Christian churches are not the only ones making themselves at home in Russian society. The Roman Catholic Church has re-established a presence. The Hare Krishnas are also here, as are the Unification Church, or Moonies, and numerous Christian fundamentalists and sects.

The Russian Orthodox Church, for so long an intimate part of national identity, is not able to cope with the inroads being made into its congregations,

Maybe the sale of icons represent something more, the loss of a Russian spiritual heritage.

During the Soviet era social services were provided to citizens, but now the level of poverty is so high that the State is unable to cope. Soup kitchens run by Christian charities currently fill this gap, staffed mainly by foreign volunteers.

Eden Allswung is an American student who finds volunteering at a Moscow soup kitchen an opportunity to put her Christian values into action, and welcome the older people who come in for meals there,

They always say, why are you so nice, do they pay you to do this?  And we say no, we want to do this.

‘Radharc In Europe : Struggle For The Soul Of Russia’ was broadcast on 30 June 1994. The narrator is Fintan Drury.