A decision by Guinness to replace the corks used in bottled stout with metal caps is not popular in a Drogheda pub.

Corks will pop no more for bottled stout drinkers, and patrons of one Drogheda pub are up in arms as Guinness will replace corks with metal crown caps.

In the 1960s there were still publicans in Ireland who bottled Guinness from the keg on their own premises, with a hand corking machine.

Kegs of Guinness were delivered to the pub from the brewery. The stout was then bottled, and sealed using a hand corking machine. Guinness labels bearing the publican’s name and address were then pasted onto the bottles, and the bottles remained in the pub cellar for fourteen days to ‘bring on’ the stout.

This dedicated and reliable craft will soon vanish into the mists of history. Guinness maintains that corks are unhygienic, and want to have greater control over the quality of their product.

A 31 March deadline is approaching and publican Pat O’Hagan and his customers are not pleased. A petition to keep the corks where they claim they belong has been started. Pat O'Hagan believes corks are far superior to crown caps. The more exclusive sector of the drinks industry has no problem with them,

If it’s unhygienic, why do they use it in champagne, why not put a cap instead of a cork?  Answer me that one?

The committed drinkers of Pat O’Hagan’s bottled Guinness will have a major dilemma on their hands.  One man is not willing to change over,

I wouldn’t go into a public house unless there was a cork bottle in it.

According to one lady who is enjoying her glass of Guinness, there is a difference,

I’d sooner have a cork bottle any time...because it tastes better, tastes smoother... 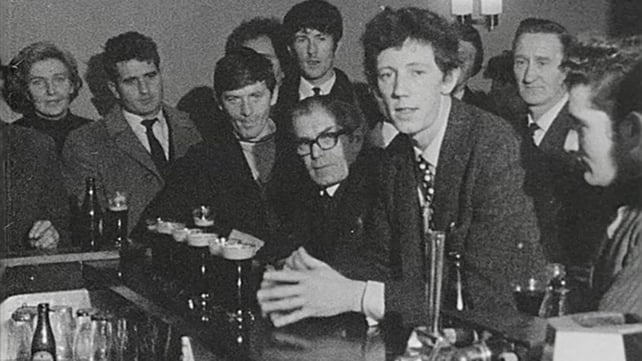 Is there really a difference?  One pub regular and bottled Guinness connoisseur, Mr Clinton, is brave enough to undertake a blind taste test for the camera, and correctly identifies the crown cap bottle.  He describes what stood out for him,

The tin top is casky, to my palette anyhow.

How will Mr Clinton manage when crown caps are the norm?  The radical idea of giving up drink altogether is being considered,

This episode of Newsbeat was broadcast on 4 February 1969.  The reporter is Colin Bird.