Alcohol and electrical goods are the most popular purchases for the thousands crossing the border to shop in Newry.

Traders of Newry are laughing all the way to the bank as thousands and thousands of shoppers from the south cross the border to avail of bargains and lower rates of VAT.

The scenes resemble the gold rushes except this time it's liquid gold in the form of alcohol or nuggets the size of colour televisions.

One trader said that more than eighty per cent of the televisions he sells go south of the border. Another said that he was selling in one day what he normally would sell in one month.

The reason for the bargains is that goods in Northern Ireland carry only half the VAT that they carry in the Republic. However, if any item costs more than fifty-two punts and is not declared at the border,  the buyer is breaking the law.

Trader Michael Carlin advises shoppers to declare what they have bought at the border. He says that even after paying the difference in the VAT, it is still possible to save money. There is little sympathy for traders south of the border who are suffering as a result of the boom being experienced in Newry he sees the current trend as part of the economic cycle.

On a busy day, it is estimated that around 150 buses and thousands of cars cross the border each day to avail of the lower prices. Traders estimate that around two million punts daily are spent in Newry with queues outside every shop.  Alcohol is the main attraction and shoppers can bring as much beer across the border as they like as long as it is for personal consumption and not for resale. 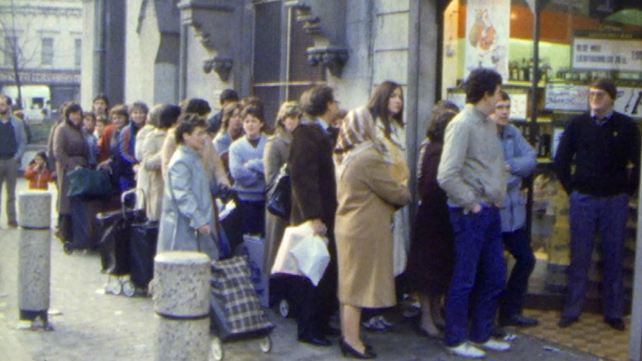 Cans of Harp can be bought at half the Republic's price.

Trader Pat Larkin says that the majority of shoppers are operating within the law and while they may appear to have a lot of alcohol, they are shopping for family and friends too.

Shoppers told RTÉ News what they have been spending their money on.

While Newry has become a shoppers paradise, there is still the impact of the Troubles. A bomb blast and an armed raid within the last week serve to remind people of the constant threat of violence. Despite this, the popularity of Newry for shoppers is evidenced at the mile and a half long queue of traffic heading south at the border.

Customs officials say that crossing the border can take up to three hours with only six officials to deal with the incredible amount of traffic.

South of the border in Dundalk, some shop owners have experienced up to fifty per cent drop in sales.  With a VAT rate in the south of thirty-five per cent as opposed to fifteen per cent in the north, retailers are finding it difficult to compete on price.

An RTÉ News report broadcast on 13 December 1983. The reporter is Conall O Móráin.