A mother of ten moves into a caravan and goes on hunger strike over the smell from a pig farm.

Mrs Pearl Cooke from Castlemitchell, Athy, Co Kildare, has gone on hunger strike over what she says is the failure to take action against the obnoxious smell from a piggery set up near her home.

It was impossible to live in my house. Curtains bed clothes, clothes on the line everything smelt and the children were always giving out.

She started her hunger strike on 23 April 1990 and intends to continue to the bitter end if necessary. Mrs Cooke is supported in her actions by husband Pat, their ten children and her neighbours.

Mrs Cooke is staying in a caravan at the end of the garden until the issue is resolved. The neighbouring farm houses up to 300 pigs, and the smell travels for miles especially in the summer.

An RTÉ News report broadcast on 24 April 1990. The reporter is Michael Ryan. 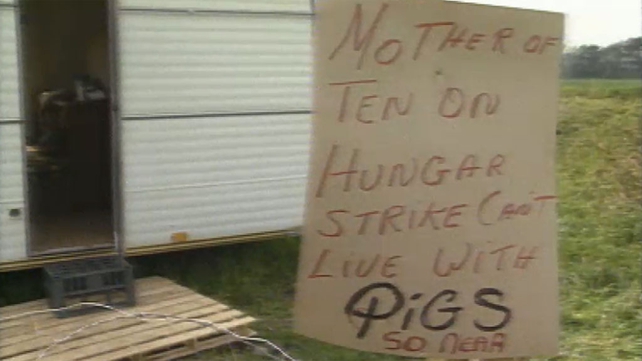