Following the rebellion against British rule in 1803, Robert Emmet was captured, tried and executed.

In 1970 the documentary 'The Search for Robert Emmet's Grave' provided a survey of the searches that have been made for the grave, from Dublin to Wicklow, and to Blennerville in Co. Kerry. Presented by John O'Donovan the programme meets James Robert Emmet, the great, great, grand-nephew of Robert Emmet (1778-1803).

The opening sequence to the documentary and describes the trial of Robert Emmet at Green Street Courthouse, and his execution outside Saint Catherine's Church on Thomas Street in Dublin.  The voice over is provided by Niall Toibin.

Robert Emmet led a rebellion against British rule in 1803. Emmet was captured, tried and executed for high treason. The whereabouts of his remains are still a mystery.

'The Search for Robert Emmet Emmet's Grave' was broadcast on 23 February 1970. 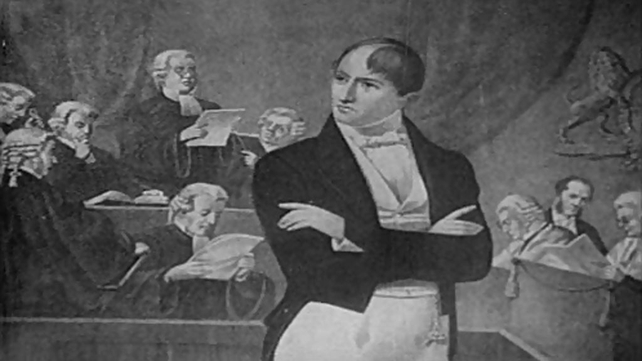 The Trial of Robert Emmet