This weekend, leaders from the G-7 will convene for their annual summit, this time in Biarritz, an upmarket seaside town right at the bottom of the Bay of Biscay.

Famous for surfing, chocolate and espadrille shoes, it's now in lockdown for the leaders of the world's seven richest democracies, their diplomatic entourage and vast travelling press corps.

Needless to say the locals – who need security badges to get in and out of their own homes – are not impressed. For French President Emmanuel Macron, who is spearheading France's G7 presidency this year, the meeting is a chance to relaunch multilateralism, promote democracy and tame globalisation to ensure it works for everyone.

Many veteran observers of such summits think it more likely the gathering will expose the political, economic and ideological fault lines threatening Western solidarity and international co-operation.

Last year US President Donald Trump stunned his next-door neighbour and summit host Justin Trudeau by refusing to sign the summit's final communiqué over a perceived insult. President Macron is taking no such chance, and has abandoned the idea of a final communiqué altogether for this year.

So what can President Macron do to rescue the summit? At the heart of his programme is dealing with the adverse effects of globalisation. 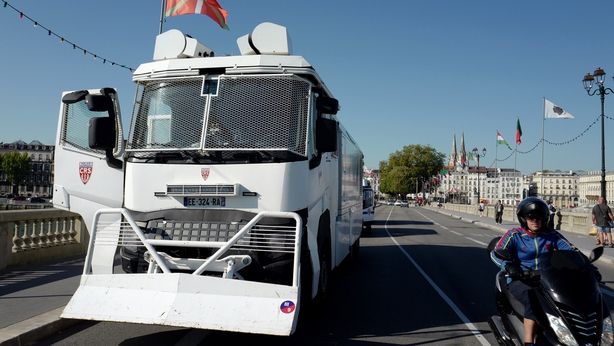 "Our priority will be combating inequality," his government explains. "The aim is not to abandon globalisation ... but rather to better regulate it so that nobody is left behind."

This is important for home consumption too, after months of protests by the "Yellow Vests," or Gilets Jaunes.

They too are due to show up in Biarritz – or rather as close to the town as the French security forces will allow them to get. Indeed the main protest is due to take place in Spain, 30km away, where the Gilets Jaunes will join a protest by environmentalists (even though the Gilets Jaunes movement started as a protest against ecologically-inspired fuel tax rises), and by Basque nationalists (Biarritz is a Basque town).

The French have deployed 13,200 police, gendarmes and CRS to protect this summit. The Spanish have deployed about 3,000 to control the border in co-operation with the French (I saw a Guardia Civil Jeep in Biarritz this morning). The Spanish prime minster, Pedro Sanchez, is one of the guests invited to take part in the meetings this weekend (rather like the way Enda Kenny was invited to the G8 summit in Enniskillen by then PM David Cameron).

The French president has identified five areas where G7 members can co-operate on global inequality. These include enhancing economic opportunity, regardless of a person’s gender and origins; taking on global environmental degradation, which disproportionately affects marginalised communities; fighting insecurity, extremism and terrorism, which lock societies in cycles of violence; expanding digital empowerment and human-centered artificial intelligence; and renewing the G7’s partnership with Africa, so that the continent can share in global prosperity.

The French government has also promised to overhaul the format of the G7, so that it will no longer be "just a behind-closed-doors meeting between Heads of State and Government."

For the past eight months, it has solicited input from women, youth, labour, businesses, academics, scientists, civil society and think-tank representatives. Gender equality has been an issue of particular importance, as France has followed in the footsteps of 2018 host nation Canada in signalling its commitment to a "feminist foreign policy."

Macron has also expanded the Biarritz guest list beyond G7 nations, reflecting his belief that "the time when a club of rich countries could alone define the world’s balances is long gone." He has invited four major democracies - Australia, India, South Africa and Chile, which hosts the annual UN climate conference in December - as well as several African partner countries: Burkina Faso, Chad, Egypt, Senegal and Rwanda.

And with digital tax on the agenda – and a point of particular friction between the host country and the US, as the French are pushing ahead with a digital tax even without EU support – the head of the OECD, Angel Burris will be there trying to keep the two sides on board with the OECD's plan for a global digital tax – one that is supported by the USA. In blocking the EU’s efforts to formulate a digital tax, Ireland had said the OECD was the right organisation to plan such a reform, because it included the US.

Since then the US has become an enthusiastic backer of a better way to tax the digital economy, leaving Ireland to play catch up with the emerging new reality, which the OECD hopes to present by the end of next year.

Other international organisations here reflect the summit concerns – the heads of the World Trade Organization (WTO), the secretary general of the United Nations, the deputy head of the IMF (they still haven’t sorted out who will succeed Christine Lagarde, who is moving to the ECB), and the head of the International Labour Office.

But the real summit action, as always, will reflect less the formal agenda than the underlying geopolitical, economic and domestic political pressures on the major players, often playing out on the sidelines. Expect major frictions on the following topics:

America’s G7 partners will be desperate for any sign of a truce in the spiralling US trade war with China. On Friday – the eve of the summit – things got a lot worse, with China announcing some (fairly mild) retail irony measures against earlier US tariff moves, followed immediately by President Trump imposing very large counter-retaliatory tariffs on Chinese goods, accompanied by a tirade on Twitter against China and US companies that do business there.

The US China trade war is widely seen as the biggest risk to the global economy. It has already caused a slowdown in global growth, and has hit some trade oriented countries particularly hard, including G7 member Germany, which is now almost certainly in recession, due to the trade war-induced slowdown in its biggest export market outside the EU, China. And a German growth halt impacts the rest of the EU as well.

Against this background, even a tepid statement of support for reform at the World Trade Organization and new trade rules combating market distortion are tough sells. In particular the WTO appeal court system – one of the most important roles the WTO performs in sorting out trade disputes - is grinding to a halt because the US has refused to back the appointment of new judges to the panel that rules on disputes. This is of course important in the context of Brexit, where supporters of a no-deal have touted "WTO rules" as the solution to leaving the EU without an agreement. But even those meager rules are not much use if they can't even be enforced.

This is not supposed to be a 'Brexit Summit' – it's not on the formal agenda, and EU Council President Donald Tusk has been keen to play down expectations about anything of substance emerging from this weekend.  When Boris Johnson came to power in the UK, this meeting was billed as a key event that would tell us much about what way the UK’s departure from the Union was likely to go, driven by that long-standing and utterly misguided British view that all EU decisions are made by the Germans and the French. But Mr Johnson’s visits to Berlin and Paris last week swiftly put paid to that notion (again).

Donald Tusk will meet Boris Johnson in a bilateral meeting tomorrow lunchtime, and Brexit will be discussed.  It’s the first formal meeting between the two since Mr Johnson became prime minister. But they have a raft of other business to go over as well, including keeping European unity on the Iran nuclear deal in the face of US opposition.

It was reported earlier in the week that President Trump could use the G7 meeting to make a public offer of a US-UK trade deal, to offer support to Boris Johnson. This is seen as a sign of his dislike of the EU and even of an intent to see its break up. Statements to the contrary by congressional leaders have been eagerly seized upon by Irish diplomats and politicians, and a conspicuous display of support for Brexit by Mr Trump at this summit would be seen in Paris, Berlin, Rome and Brussels as a hostile act. It would also probably be a signal to the rest of us that things have not gone well on the main agenda points.

President Macron wants the G7 to resume its role as a counterweight to authoritarian trends sweeping the world. Look for Macron to push for a common, bold stance against Russian disinformation operations in Western societies, as well as statements of support for democratic aspirations in Hong Kong and Russia. Even before the summit opened, Jair Bolsonaro, Brazil’s recently elected strongman president, was subjected to some "democratic discipline" over the Amazon fires. This ought to be a relatively easy rallying point – at least for six of the G7 states. As is by now customary, the question is what will President Trump do?

At their mid-July meeting in Chantilly, G7 finance ministers and central bank governors scrutinised Facebook’s plans for a new cryptocurrency, Libra, which they view as a potential threat to national sovereignty and the functioning of the international monetary system. They also discussed the need for fairer taxation of multinational tech companies, which have often avoided taxes through profit-shifting. Expect little action on these issues, due to the US-China trade row and US-French digital tax row (see above).

Since President Trump announced the US withdrawal from the Paris climate accord at a G7 summit in 2017, Macron has been the agreement’s most vocal proponent, spearheading the One Planet Summit and insisting that the world unite to meet the target of no more than 1.5°C global temperature rise from the pre-industrial period. The French president will push the G7 for firm commitments on emissions reductions, biodiversity protections and ocean conservation.

The US president may find himself the odd man out again (but will probably get support from one of the invited government leaders, Scott Morrison of Australia, who unexpectedly triumphed in the recent general election there, and carried a lump of coal into parliament in Canberra to mark his victory, which was seen as a pushback on potential curbs on Australia's vast mining industry).

But Mr Trump doesn’t have to be too disruptive at this summit – he can afford to play the waiting game. Next year the leadership of the G7 passes to the United States, and President Trump will get to host his own summit, and set his own agenda. And that will happen just a few months before the next US presidential election.