There are strong indications tonight that any final decision to tighten restrictions in Dublin would be made by the Government on Friday.

The National Public Health Emergency Team is expected to make recommendations tomorrow and these will first be considered by the new Covid-19 oversight group.

This group is chaired by the Secretary General to the Government Martin Fraser.

It will consider the wider societal and economic impact of the recommendations.

Then, on Friday the Cabinet Covid-19 Sub-Committee will meet.

This committee is chaired by the Taoiseach and also includes the Tánaiste, Health Minister, Transport Minister, Finance Minister and the Minister for Public Expenditure.

Arising from its discussions on Friday, it is likely that the Cabinet would then make a final decision later that day.

Ministers had earlier warned that the capital appeared on course to move from Level 2 to Level 3 under the Government's new plan.

The targeted restrictions are aimed at suppressing Covid-19 in the capital, where new cases of the coronavirus have increased steadily in recent weeks.

A further 254 cases of the virus were confirmed today, with 136 of these in Dublin.

People living in the capital are being encouraged not to travel outside the county. A maximum of six people from no more than two households in Dublin should meet at any given time. The number of people that can attend sports matches and events is capped at 100.

The Government also announced that pubs in Dublin that do not serve food will not now reopen on 21 September as planned.

Read more:
Latest coronavirus stories
Taoiseach urges against travel from Dublin if possible
Covid-19 restrictions in Dublin: What is different?

Minister for Finance Paschal Donohoe earlier said there was "a very real and strong possibility" that guidance for Dublin could change by the end of the week and the capital could be faced with further restrictions.

Speaking on RTÉ's Morning Ireland, Mr Donohoe said the reason additional guidance for Dublin has been issued, on top of the Level 2 guidance, is to see what can be done to continue to keep those who live and work in Dublin as safe as possible. 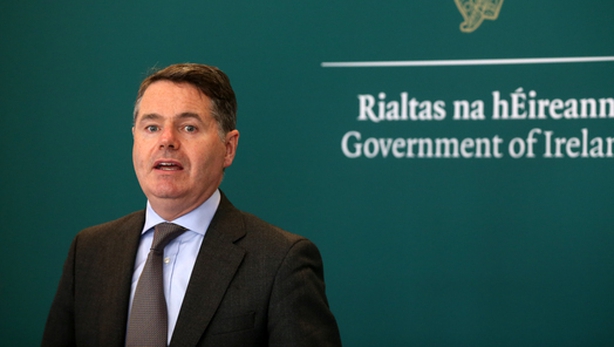 He said the new Covid-19 oversight group will allow the Government time to consider and implement recommendations from the National Public Health Emergency Team in a "speedy and effective" way.

Mr Donohoe said the new group will look at how the recommendations from NPHET will affect the overall progress and wellbeing of the country.

He said that NPHET is independent from the Government and the independence and expertise of its members will continue to be respected.

He said that some new countries will be added to the Green List of countries free to travel to and from as early as Monday.

Thereafter, if and when the EU agrees a common travel framework, he said the Government will consider it and hopefully "be in a position to integrate our country into that framework".

The minister said that the Government will do all it can to improve the testing turnaround time, but said that with almost one million tests now completed it has shown its ability to put the right testing procedures in place.

He said that the additional €600m for a winter support plan secured by the Minister for Health to resource the health service will help the HSE deal with the virus at a challenging time for the country.

Separately, Minister for Public Expenditure and Reform Michael McGrath said that "it is a distinct possibility" that Dublin will be classified to be at Level 3 of the Living with Covid plan by the weekend.

He said it will then decide on what is best for the county based on other social and economic impact of potential recommendations.

Minister Michael McGrath says 'it is a distinct possibility' that Dublin will be classified to be at Level 3 of the Living with Covid-19 plan by the weekend | https://t.co/LrgcBCTSld pic.twitter.com/MHZgnnlojO

Elsewhere, the Executive Director of the World Health Organization's Health Emergencies Programme has said the challenge in Ireland and around the world is to "surgically pick apart the measures that are going to have the most effect on the virus and the least effect on our communities and our societies".

Speaking at the Global Ireland 2020 Summit, Dr Mike Ryan said "we have to build stronger public health systems" and build a stronger partnership with our communities.

He said he did not believe the lockdowns themselves bought time, but it was the "communities who essentially agreed to that contract to separate themselves from each other, to isolate and quarantine themselves effectively, in order to suppress the transmission of the virus and that worked".

He said many of the world's health systems, including in Ireland, have ramped-up capacity to treat large numbers of patients in a safe way and protect health workers at the same time.

He said the public health part of the health system, which detects, tests, traces, isolates and quarantines and breaks chains of transmission in partnership with the community, did not score as highly in its performance worldwide and "there's more work to be done in that space in the coming weeks".

Meanwhile, restrictions on members of the Cabinet were lifted late last night after Minister for Health Stephen Donnelly tested negative for Covid-19.

Tánaiste Leo Varadkar said all ministers would be "working as normal" today, in light of the test result. However, today's Dáil business had to be changed.

A series of Dáil votes, which were due to be taken today, have been delayed until next week because the House adjourned for nearly four hours yesterday, due to the Cabinet restrictions.

Ceann Comhairle Seán Ó Fearghaíl later agreed to a request from Labour leader Alan Kelly for a written explanation on how such an adjournment was decided.

Shortly after attending a Cabinet meeting yesterday morning, and then speaking to the media about the Government's new medium-term plan on how to live with the coronavirus, Mr Donnelly felt unwell and contacted his GP to secure a test for the virus.

That course of action had been suggested by acting Chief Medical Officer Dr Ronan Glynn, who in turn advised all other ministers to restrict their movements until the result of the test was known.

Last night, Mr Donnelly was informed of a negative test result, and so the restrictions placed on the Cabinet were immediately lifted, and ministers were back at their desks today.

Sinn Féin's health spokesman David Cullinane said it was good news that the minister had tested negative, and the very rapid turn-around time in securing his result demonstrated how crucial it is for everyone.

Yesterday, the Department of Health confirmed an additional 357 cases of the virus, 218 of which were recorded in Dublin.

The Taoiseach has said the National Public Health Emergency team will meet again tomorrow and will give the Government further advice on Dublin at that stage.

Govt to publish proposals to hold an election during a pandemic

The Government's schedule of planned legislation includes proposals aimed at holding elections during a pandemic.

The Electoral (Reform) Bill would also establish a statutory independent electoral commission and for the modernisation of the registration of electors.

It will also include proposals aimed at "assisting with the holding of electoral events where Covid-19 type restrictions are in place."