US President Donald Trump and First Lady Melania Trump have returned to Ireland after attending a D-Day commemoration in France.

Air Force One touched down at Shannon Airport at around 5.15pm. 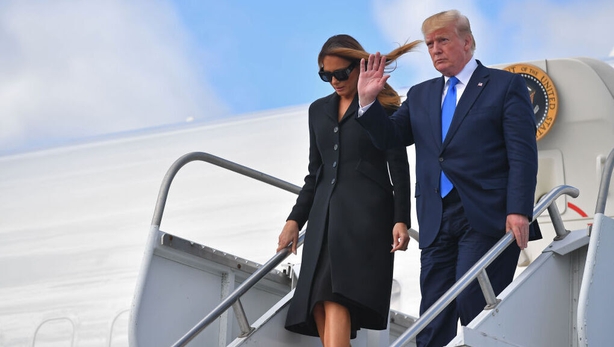 Mr and Mrs Trump travelled to Doonbeg where they are spending a second night at the Trump international hotel and golf resort before returning to Washington tomorrow.

Last night, Donald Trump Junior and his brother Eric visited a number of bars in Doonbeg, thanking locals for supporting their golf club.

It has led to rumours that their father, President Trump, may visit the village tonight.

White House Chief of Staff Mick Mulvaney is due to host a dinner in Doonbeg later which will be attended by Irish officials including Ireland's Ambassador to the US Dan Mulhall, the Government's special envoy to the US Fine Gael TD John Deasy and Fianna Fáil Senator Mark Daly.

It comes as Melania Trump described Ireland as a beautiful place, adding that she enjoyed the opportunity to experience unique Irish traditions.

Yesterday, while Mr Trump held talks with Taoiseach Leo Varadkar in Shannon Airport, the First Lady attended a cultural performance in the airport.

She joined Minister for Culture, Heritage and the Gaeltacht Josepha Madigan for the Irish cultural programme which was composed of five separate performances, each representing a piece of Irish heritage.

At the end of the programme, Mrs Trump was given a floral bouquet by one of the female dancers.

Speaking after the event, Mrs Trump said: "Thank you to the performers for sharing your talents with me.  Thank you to Shannon Heritage for hosting this lovely event."

Separately, demonstrators in Dublin inflated a six-metre tall blimp over the visit of Donald Trump to Ireland.

It coincided with a protest at the Garden of Remembrance this evening.

Many children would not discuss cyberbullying - survey