The village of Doonbeg and its locals were praised by US President Donald Trump's son Eric as "the best neighbours in the world".

His comments came as he visited the west Clare village last night with his brother Donald Jnr.

They bought everyone drinks at each pub.

A presentation - of a photo of two local castles - was made by local priest Fr Joseph Hough.

Eric Trump thanked Fr Hough for recent comments which were reported in the media that there was a place in heaven for the Trump family.

"He has been one of our biggest supporters - Fr Hough. He has been incredible. I have being watching TV all week - right. And, they had the greatest headline. He comes out and says: ‘I saved a spot in heaven for all of the Trumps’. Which we need by the way," Eric told patrons at the Igoe Inn as the presentation was made.

"You see the support it is incredible. It is simply incredible. The whole town showed up and we’ve done a lot for Doonbeg. We love Doonbeg. We saved a great hotel. We love the people in this town and they love us," said Eric.

He lauded locals for supporting his family.

"It is amazing. I have being watching news all over the world and we have people from Doonbeg on TV saying Trumps are great - they’re the best. We have the best neighbours in the world and we love them. We appreciate them. To see the turnout is nothing short of incredible," he said. 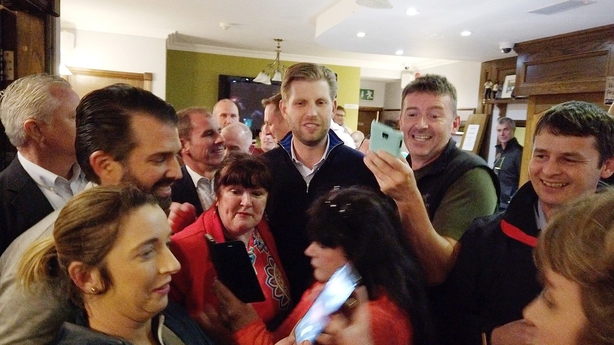 Asked about whether President Trump would visit the village of Doonbeg he said: "My father is working very hard. He was in Portsmouth today. He will be in Normandy tomorrow for D-day. He loves Doonbeg. It’s one of his favourite places in the world".

He described Doonbeg as "a special town with some of the best people in the world".

"It really does feel like this is a second home for us and we have invested tremendous amount of money and the local economy. You see it paying off in spades when you see these crowds and the amount of support we have," he added.

Donald Tump Jnr told Morning Ireland: "You can see the reception that we get. It is incredible. The town has been so good to us. We, obviously, invested here a long time ago. We took a real chance when Ireland wasn’t exactly ... and it has just turned out to be great. The warmth and the reception is just amazing."