The owners of the Kilminchy Lodge Nursing Home in Portlaoise have confirmed that three residents at the home who were Covid-19 positive have died and a fourth has been hospitalised for treatment.

In a statement to RTÉ News, the company said it wanted to acknowledge the medical support given by Portlaoise General Hospital.

It also thanked staff at the nursing home who it said "have given their selfless and tireless dedication to the care of our residents at this time".

It is understood that staff members were asked to stay in hotels in an effort to contain the outbreak.

Kilminchy, which is owned by the Brindley Group, said the nursing home continues to be supported by Public Health and is working closely with the Health Service Executive and the Health Information and Quality Authority (HIQA).

A second round of testing was done on 8 October, the results were returned on 10 October and no new additional positive cases were found.

The company said that, as per legislation, all deaths that have occurred within the nursing home have been reported to the county coroner in Laois.

"Since the outbreak, sadly two positive Covid residents have passed away within the nursing home and these two deaths were reported to the Coroner. One resident sadly passed away in Portlaoise General Hospital," it said in a statement.

"The best practices that were identified from the onset of the pandemic have continued in line with Public Health and WHO recommendations. The nursing home continues to work closely with Public Health, The HSE and HIQA," the company added.

The company said that no Covid-19 cases have been detected at any of the other eight Brindley Group Nursing Homes other than those already reported at Brindley Manor Nursing Home in Donegal last week.

There has been no change in the situation at Brindley Manor Nursing Home where 30 cases of Covid-19 were confirmed.

It is understood that most of those affected are asymptomatic or displaying mild symptoms and a spokesperson said "everyone is doing well".

Speaking at this evening's briefing at the Department of Health he said given the extent of the widespread community transmission at the moment, it would be impossible to fully keep this infection out of nursing homes and give ourselves the assurance that we need.

He said "there is no question if we see the community transmission patterns continue to rise we are going to see more nursing homes impacted, more residents infected and the result of that unfortunately will be further mortality".

Dr Holohan said it won't be possible to protect nursing homes adequately, if there is widespread community transmission.

Earlier, the Minister of State at the Department of Finance has suggested that isolation facilities be provided for the staff of the Kilminchy Lodge Nursing Home, so they do not have to isolate in busy family homes.

Speaking on RTÉ's Drivetime Sean Fleming, a TD for Laois/Offaly, said while the residents are in isolation, "we may now have to consider a situation providing isolation facilities for the staff, maybe taking over a hotel in some of the towns, so all the staff for the two week period, can isolate properly in good conditions and not have the difficulties of trying to isolate in a busy family home".

The Minister said this is not current policy, but having been through this twice in Laois, he said he is equally concerned about the large number of staff who are at home self-isolating, which "is in itself is a risk, that hasn't been factored in to date". 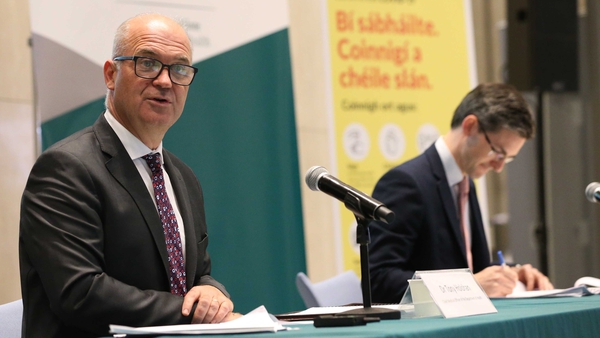 CMO urges 'everybody to act' to break Covid-19 transmission