The coming General Election is likely to be remembered for a seismic change in the party system but it is also remarkable as it will take place on a Saturday.

Traditionally we voted on weekdays. This is because Britain has always done so, and so did we in Westminster elections.

The day of the week has varied with Wednesday or Thursdays the norm.

Falling turnout after 1981 prompted some consideration of this pattern and in 1997 the election was held on a Friday in some hope it would help raise turnout.

The thinking was essentially that many returned home, where they were registered, for the weekend and could vote much more easily.

Bertie Ahern complained his voters were leaving Dublin where they were registered, for the country, where they were not, and this cost him support. No matter: He did well enough and Fianna Fáil won the election.

It is hard to see this move boosted turnout since it was down on 1992. Friday became the new norm (2007 was an exception).

Turnout is still relatively low, although our turnout data is unreliable because too few resources have been expended on maintaining electoral registers. 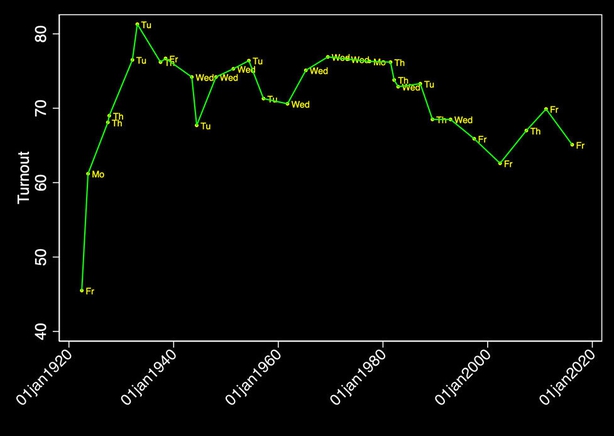 The justification given for making Saturday the day for the election was that this would mean schools, which are widely used as polling stations, would not have to close, with subsequent disruption to families with school age children. But there is also some hope that this may help raise turnout.

Weekend elections are more common than elections in midweek.

Much of Europe votes on Sundays (which is why we have to wait to start counting European election ballots here). Some countries vote normally on Saturdays but some even set aside the whole weekend. There has been a lot of research in recent years on the factors that will make for higher or lower turnout. It seems that weekend voting is not a significant factor.

What does account for turnout? Economists have often pointed out that it seems irrational to vote as one's vote will almost never make any difference to the outcome. One simple answer is that people vote when they see that as their duty.

This sense varies across the electorate and is declining over time, but that is key, the day of vote will matter little.

Another answer is that voting is largely a question of habit, generally acquired by repetition.

This approach is useful in highlighting the importance of early experiences of voting, and certainly supports extending the franchise to 16 year olds who, unlike those a little older, are more likely to get their first voting opportunity when they are still at home, and at school.

A third, more sympathetic, answer emphasises the costs of voting. People will vote more often if it is easy to vote, and if the cost is trivial it will not matter. Weekends may be easier for most people, but there are many other ways to make it easier, not least by facilitating early voting, by post or in person. Most people in Sweden have voted before the campaign has finished.

Most research shows that people are more likely to vote when the election matters to them.

This can happen in different ways, but the campaign itself, and contact from canvassers, or friends and family, may help persuade them that it does. The circumstances of the election may also be critical.

I remember someone voting in my polling station in 2011 as soon as it opened. He was being forced to emigrate and was on his way to catch his plane to North America, but he wanted to record his choice before he did so.

Low turnout in the US (only the Swiss have lower turnout among established democracies) was explained by some in the 1950s as testifying to satisfaction with the way things were, although arguably those with most reason to be satisfied were also most likely to vote.

There was also much less difference between US parties in the 1950s than there is now (although turnout remains low). Turnout in 1930s Germany was very high, and did not point to a well-functioning political system. But differences between the parties were considerable and so the outcome was likely to make a difference.

This election seems to be one in which making a difference, a new start, and bringing in real change is a rallying call for many. That should increase turnout, but with our electoral registers we will not be certain.

What difference does it make how many vote? One account says that since it is those most disadvantaged by the political system who tend not to vote, then higher turnout will help parties who represent such people.

The comparative evidence however does not show us that higher turnout benefits leftist parties, as might be expected. This may be in part because leftist parties have been very good at mobilising those supporters in many countries. The best answer is that it varies.

In Ireland, we know that turnout is higher in rural Ireland, at least in general elections, and lots of evidence shows lower turnout normally among younger voters and poorer voters.

Research from the Irish National Election Study on the 2002 election suggested turnout differentials between social groups did not matter. Had everyone voted the results would have been much the same.

Yet in in the recent past those we know that who seem to support Sinn Féin have been less likely to say they would certainly vote, or that voting was important.

This is an obvious reason why Sinn Féin underperformed in elections relative to polling figures. At present, however, turnout may matter little to Sinn Féin because it has not nominated enough candidates to take advantage of a high level of support.

Only in the contest to be the party with most votes might differential turnout matter, but the value of this may be significant when it comes to government formation.