Two more polls over the weekend were published in national newspapers, giving us six since the election was called and seven since the start of the year. Assessing what the polls say about the strength of the parties at this point can best be done by looking just at these polls and discounting earlier ones, particularly since there was only one poll in December.

I have restricted my analysis to the campaign polls as the graph below indicates. This suggests Fine Gael is now falling significantly below its 2016 strength, while Sinn Féin is well above its own performance last time. Fianna Fáil has dropped marginally, and the rest improved equally marginally on 2016, a gain down to the Green Party.

Polls vary due to real changes in vote intention over time, but also because companies have differing methodologies. Only in the case of RED C have we seen two polls, the first being the second one of the campaign, the second published this weekend. Comparing the two also suggests a Fine Gael decline and Sinn Féin growth. It may be remembered that Sinn Féin did not turn its poll numbers into votes in 2016, and this could happen again, but its average ratings this time are much higher, and these individual poll estimates do generally try to account for differential turnout.

The table below shows where these trends leave the parties at present, with Fianna Fáil marginally ahead of Sinn Féin, 23.5% to 22.5%, and Fine Gael in third place with 20%. Green lead the rest with 8.5%. It is striking that the combined Fianna Fáil and Fine Gael vote is less that 44%, the lowest we have seen at any point since polling began, and a long way below the figure of 65% seen in 2017. Sinn Féin's rise is also remarkable, well up on its polling before Christmas and more than twice its local election vote last year, normally a good guide to the next election. 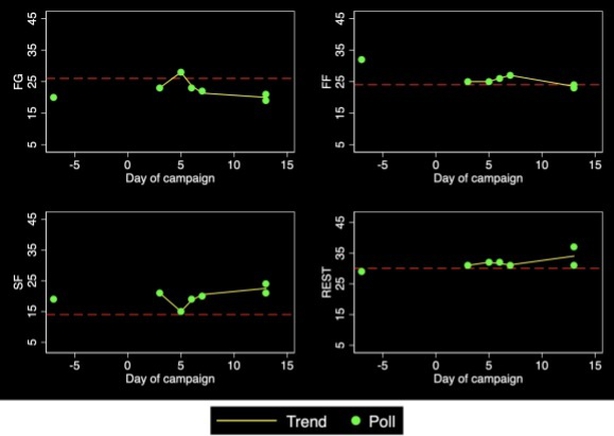 The table includes estimates of how these votes would translate into seats. (The way this is done is explained below.) One unusual feature here is that Sinn Féin is fielding fewer candidates (42) than the number of seats it might be expected to win on its poll of polls vote. (It is not just commentators who are surprised at these poll numbers!)

The prediction of 42 seats here is almost certainly too high, but if the party did win 22% of the vote, the likelihood is that it would have enough votes to win two seats in several places where it is fielding only one candidate. The most important feature is that the largest party, Fianna Fáil, is expected to win well short of even the 50 seats won by Fine Gael in 2016. This would present severe problems for Micheál Martin when trying to form a government. And with Fine Gael only on just 34, even a historic break with the past in the form of a Fianna Fáil/Fine Gael coalition might not solve the problem. Their combined seat total would be short of the 80 seats needed for a majority, although the most positive estimates for both would sum to 79.

The other notable feature is the decline of independents and minor parties, who won 23 seats last time but are expected to win 15 this time. There are many high profile politicians elected in 2016 who are not standing this time, which may go some way to explain this decline.

With eight days of campaigning between these latest polls and voting day there is still a lot of time for change. If the wind is in Sinn Féin's sails the likelihood is still that FF would emerge with the most seats and Micheál Martin will be faced with the tricky problem of constructing a government from the materials provided by the voters. 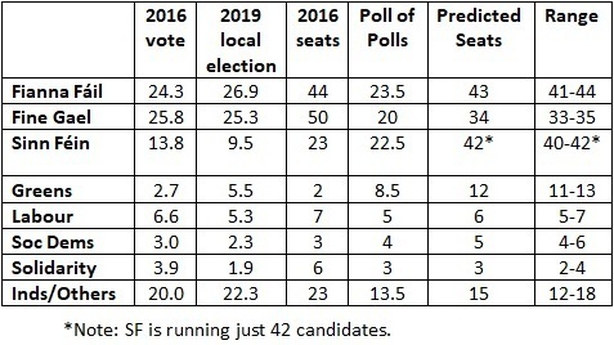 The seat estimates provided here draws on the relationship between votes and seats since the 1970s. This relationship is not a simple one, because the electoral system does not provide for perfectly proportional representation.

In practice, larger parties do a little better and smaller ones a little worse. The graph shows this pattern, with a link between the two described by a curved line. This line describes the observations well, but in the estimates of seats here I allow for two other factors: The number of candidates run and party.

More candidates, particularly for small parties, may spread a party's vote too widely and so reduce the likelihood of seats. As far as individual parties are concerned, the most obvious pattern is that independents and minor parties are less effective in translating votes into seats. Taking all these factors into account gives a model which fits the data 1973-2016 very effectively.

Typically, the differences between prediction and reality is small: Moving 3-4 seats around is all that would be required to bridge the gap between the two. There are a couple of big exceptions: Fine Gael in 2002 and Fianna Fáil in 2011. The latter is easy to explain as Fianna Fáil in 2011 failed to attract transfers to a degree that would be normal, and won 10 seats less than expected. Fine Gael also fell short by 10 seats in 2002 and this is harder to explain, although as Michael Gallagher pointed out in How Ireland Voted 2002, Fine Gael was runner-up in an unusually large number of constituencies. 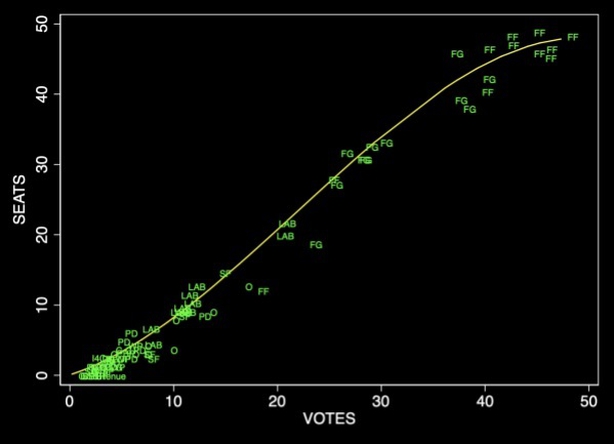