What is the truth about the 1641 Irish rebellion? Accounts vary and there are disparities in reports of the number of dead and who killed who.

Dr Margaret McCurtain, Department of History at University College Dublin (UCD), says people are always changing their version of the past as they gain more experience and understanding.

The nature of history is always changing. 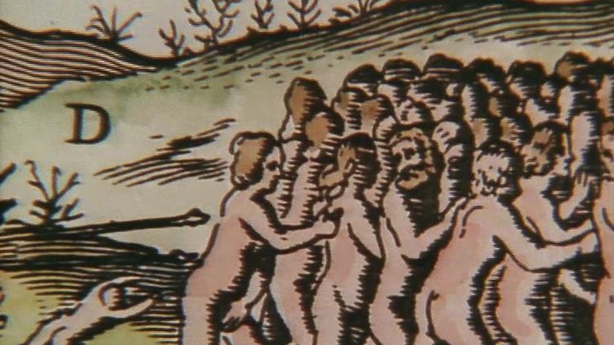 Historians began to look at the myth of 1641 delving into the inquisition papers and the deposition papers to examine if it made sense that such a powerful myth that disturbed the Ulster settlers at the beginning of the 1640s account for the irrational fear that evades the settler community, later the unionist community in Northern Ireland. The myth contributed to their fear of Catholics with such intensity, irrationality and conviction that they could never make a common community with them.

Andrew Boyd, author of 'Holy War in Ireland', references a recent Ian Paisley talk where he spoke about the massacre of Protestants and the drowning of people in the River Bann. According to legend, so many people were drowned that the rebels were able to walk across the river over the dead from shore to shore. Andrew Boyd recalls that his daughter, a journalist, being told by a member of the Democratic Unionist Party that this really happened and that there was a photograph from 1641 as proof of what occurred.

1641 was also a year of bitter conflict in England between Charles I and parliament, as well as deep tensions between Protestants and Roman Catholics. Under the circumstances, it was not always possible for people to separate truth from fiction and propaganda. This was especially true in the case of Ireland. People in England were led to believe that Catholic rebels in Ireland were responsible for the massacre of 300,000 Scots and English Protestants.

Dr Aidan Clarke, Department of History at Trinity College Dublin (TCD), explains that in a matter of four years, the reported number of dead had gone from 154,000 to 600,000. Dr Clarke believes that when talking about the rebellion, it is not useful to try to establish exact numbers and says that the major issue historically is whether a rebellion took place at all.