Preparations underway at Stradbally in County Laois for the last music festival of the summer.

Following the success of the first Electric Picnic in 2004, the stage is prepared for a second year of the festival.

This festival is not designed to be a normal music festival.

The 600 acre estate at Stradbally will be home to eight stages and 123 acts. Promoter John Reynolds describes Electric Picnic as a smaller, quirkier festival with a comedy stage, cinema, burlesque cabaret, a laundrette run by transvestites, a reggae stage, a Body and Soul area as well as an array of bands that you would expect to see at a music festival.

The festival is a valuable source of income for the owners of the Stradbally Estate. Owner of the estate Thomas Cosby explains that income from the festival helps in the upkeep and maintenance of the house and the grounds.

The festival offers dozens of bars and food stalls with everything from cocktails to organic smoothies.

Avril Stanley of the Body and Soul Village describes it as a "holistic haven", a place where festival goers can enjoy shiatsu, Indian head massage, reflexology, yoga and so much more. 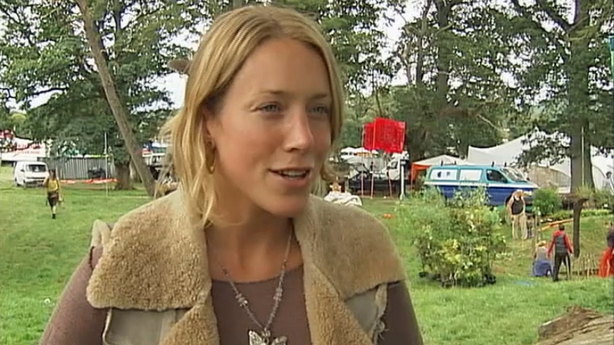 Avril Stanley of the Body and Soul Village, Electric Picnic (2005)

The festival also offers an alternative type of camping with hundreds of teepees and podpads available to rent.

An RTÉ News report broadcast on 1 September 2005. The reporter is Anna Murphy.