The Battle of Clontarf was fought in Dublin on 23 April 1014 between supporters of the High King Brian Boru and other Irish kings allied with vikings. Brian Boru's Irish opponents were Sigtrygg Silkbeard, King of Dublin and Máel Mórda mac Murchada, King of Leinster.

In this extract from 'Milestones in Irish History: Brian Boru and the Battle of Clontarf', historian Donnchadh Ó Corráin explains that the Battle of Clontarf was not a struggle between the Irish and the vikings for the sovereignty of Ireland. Nor was it a great victory that broke the power of the vikings because the vikings had long been a minor force of no military significance. Clontarf was part of an internal struggle for sovereignty between provincial rulers and its most important result was the blow it dealt to the power of the Munster kings.

It was in later tradition that Clontarf became a heroic battle of literature, with portents and visions appearing to both sides beforehand, including a fairy woman, a rain of blood and demons.

'Milestones in Irish History' was a series of thirteen radio talks about great historical turning points and their consequences. This talk was first broadcast on 22 June 1983.

The accompanying images are from an RTÉ News report on a re-enactment of the Battle of Clontarf broadcast on 19 April 2014. 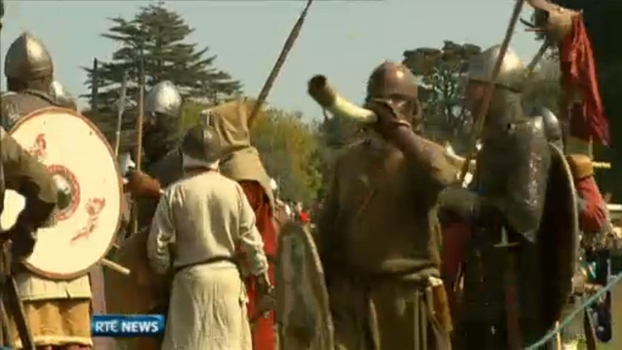