A group of Irish cadets travelled to Washington DC to form a guard of honour at President Kennedy’s funeral. This was by special request of his widow Jacqueline Kennedy, as President Kennedy had been very impressed by their drill at Arbour Hill during his visit to Ireland that summer. The 24 young soldiers were from the cadet school at the Curragh and had flown in from Ireland the previous day.

75 jets sweep overhead in a final salute to President Kennedy as the Kennedy family take their seats by the grave and the Irish cadets perform the final military honours.

Teilifís Éireann arranged for President Kennedy’s funeral to be broadcast live to the Irish audience via Telstar satellite. Irish sports commentator Michael O’Hehir happened to be in the US at the time and was asked to provide the commentary.

The entire event was broadcast live, but successful transmission of images by satellite depended on good reception, and on the day it was only possible for the audience to see the 25 minutes that showed President Kennedy’s coffin being brought by horse-drawn caisson to St. Matthew’s Cathedral in Washington DC for the funeral mass.

The television audience would not have seen all of the footage live but Michael O’Hehir’s audio commentary remained available to them throughout. 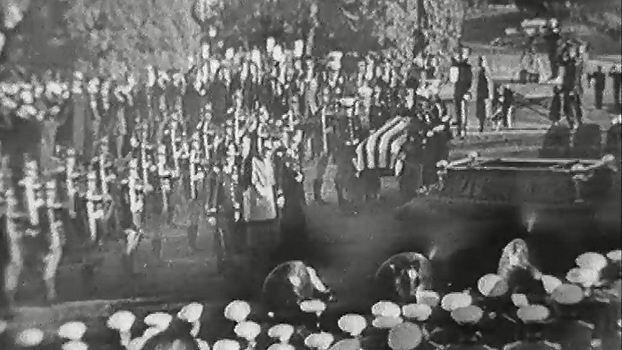 The commentator is Michael O'Hehir.