This time last year James Lowe was unceremoniously dumped from Ireland's Six Nations squad and told to go and work on his defence.

He’d racked up six caps since making his debut against Wales in November 2020, but still had a lot to learn about life at the top of international rugby.

Recalled last summer, the Leinster wing was one of the standout performers in the autumn wins over Japan, Argentina and his native New Zealand, against whom he scored the opening try and came up with a late defensive play to seal the victory.

A hamstring injury suffered in Leinster training just ahead of the championship ruled him out of the opening two rounds but he returned to score twice against Italy and saw off competition from Connacht’s Mack Hansen, who had earned his first three international caps in the opening rounds, to keep his spot for Twickenham.

That was his 11th cap and he celebrated with the first try, carried 13 times to make 209 metres, breaking five tackles along the way.

He was responsible for the concession of two penalties against 14-man England but his influence and importance to the team was evident throughout.

The "crazy" nature of the game, which ended 32-15 to Ireland, meant that Lowe could only agree with the assertion that there was as much relief as elation after the final whistle. 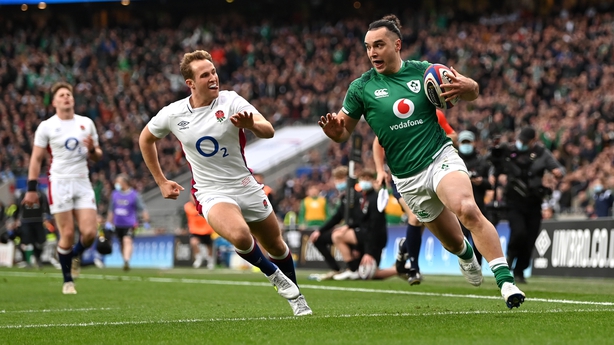 "Yeah, that's a good way to put it," said the 29-year-old. "We put ourselves under a bit of pressure but don't get me wrong, England are a fantastic side.

"We knew that if we just stuck with what we knew, played rugby, played the space early, we could put them under pressure.

"The red card to the letter of the law was a red card and we didn't play any different, we didn't go into our shells, we knew what we had to do and we came away with the points we needed.

"We understood the challenge of coming to Twickenham, we knew what we had to do to put ourselves in a position because who knows what happens next week.

"But it was awesome. We've been working on our interplay for the whole time we've been together.

"I think Sheeno threw an inside ball to Josh and Josh went through a hole, he faked to go inside but went on the outside and I was lucky to be on the end of it, I didn't do too much.

"Yeah it was an awesome start in a tough environment and then we put ourselves under pressure, we gave them a few piggybacks up the field, it felt like we kept them in the game.

"And credit to them, they took their opportunities and it felt like we played all the rugby and it was 15-all and it was just like, 'how did that happen?'.

"But that's credit to them, they're a fantastic side. We were happy to finally break them down."

Ireland lost the penalty count 15 to nine, including conceding six at scrum time.

Lowe offered his opinion on the much-debated set-piece.

"Man, the scrums...man, I'm telling you, they're cheating all the time so I don't know what's going on in there," said the New Zealand native.

"But look, that's part of rugby. Man, we need to get that right if we want to really compete and I think we've definitely got the front row to do it.

"There's Tadhg [Furlong] and Churchy [Cian Healy] is almost 40 I think and he's locking it down for 60 minutes.

"Credit to them and Rónan [Kelleher] got injured and suddenly Sheeno's in the mix, a couple of years ago you wouldn't have thought that Sheeno would be starting in Twickenham and he steps up.

"The scrum is only part of it. Around the field the boys are playing outstanding."

One of the main talking points was how Ireland allowed England to take command of the game, and why, with the experience available on the pitch, they took so long to come to their senses. 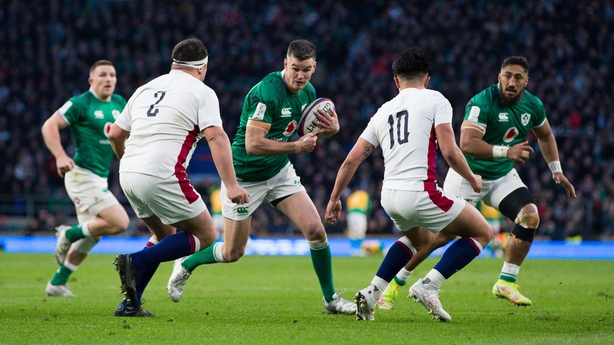 "Mate, our captain is 40-years-old, Pete is in his late 30s as well I think, you’ve got experience coming off the bench in Murray," said Lowe, jokingly exaggerating Johnny Sexton (36) and Peter O’Mahony's age (32).

"I think we had four Lions on the bench, maybe five, there’s no need to be panicky when you know those boys are coming on.

"And then partly that’s our fault but then also it’s England. We’re at Twickenham, they know that they’re doing, they know how to get themselves out of a tough hole. I wouldn’t say we got panicky, no."

Finlay Bealham, who scored a try after coming on a late replacement, spoke about meeting his family in the stadium afterwards following a lengthy period of separation due to the pandemic. 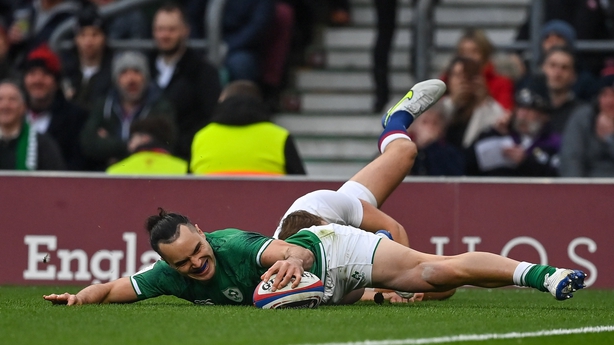 Lowe, meanwhile, says his family reunion will take a little while longer, with Ireland due to tour New Zealand this summer.

"Aw, I would love to get my family over but unfortunately it’s a bit tough at the moment," Lowe, who will keep his place for the Triple Crown game against Scotland on Saturday, added.

"I know the world is opening up - I’m hoping to tour New Zealand so they get to watch me play over there.

"But my fiancée's mother is over at the moment so they’ll be there supporting and there’s a possibility of winning a trophy on Irish soil.

"Apparently, we don’t do it often, you win Grand Slams away, trophies away, it’s something we’re obviously very excited for but the challenge is Scotland, the challenge isn’t trophy-focused.

"We know what we need to do and we’re going to treat it like another Test match." 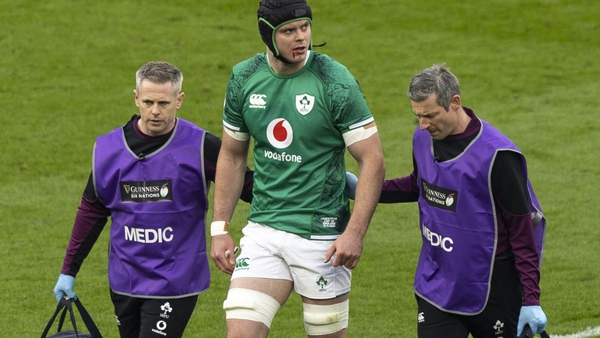 Ryan and Baird ruled out of Scotland Triple Crown clash