If ever a scoreline told a lie about the story of a game then this was it.

Good for the opening 10 minutes and poor almost beyond belief for the next hour against an England side who had seen Charlie Ewels sent off for a high tackle on James Ryan in the second minute, Andy Farrell’s men somehow found a way to win by scoring 17 unanswered points in the last 14 minutes.

It was a crazy result from a crazy game where Ireland conceded 15 penalties to England's eight but tries from James Lowe, Hugo Keenan, Jack Conan and Finlay Bealham proved the difference.

Penalised six times at the scrum, it brought back memories of the 2012 game here when Ireland lost prop Mike Ross to an early injury and the pack suffered a nightmare evening.

But this time Eddie Jones’ men, who looked to have all the trump cards when Marcus Smith levelled the game with 20 minutes to play, just couldn’t keep up with the pace of the Irish replacements, for whom Rob Herring and Robbie Henshaw stood out.

The result means England are out of the title race while Ireland can still get their hands on a first championship since 2018 if they beat Scotland and France lose next Saturday.

Jones had promised that England would "play with a physicality [Ireland] haven't seen before" and the first sign of that came after just 82 seconds and it was illegal and brutal.

Ryan returned a pass to Sexton and was open to the English cover coming across.

Ewels had a perfect line of sight but still collided head high into the Leinster lock, who missed some of last season's tournament with concussion.

It ended Ryan’s day and was a clear red card for the Bath second row.

Sexton knocked over the resulting penalty and just two minutes later Ireland got their first try.

Jamison Gibson-Park, Dan Sheehan and Josh van der Flier worked the ball on the short side before sending Lowe in from 30 yards for his sixth try in green.

It was a score that should have settled Ireland but for some reason had the opposite effect.

Garry Ringrose fumbled the ball on two occasions, there was indiscipline at the breakdown and the English pack earned three of their side’s nine first-half penalties off the scrum, which had guest flanker Jack Nowell adding his heft.

Smith got the hosts on the scoreboard with a penalty in the 18th minute after the Irish scrum disintegrated.

Just as it looked like England would cross the line, Cian Healy disrupted the maul and within a flash Ireland went to the far end of the field but couldn’t turn the territory into points.

Smith let Ireland off the hook with a missed penalty before Keenan got his name on the scoresheet.

Having already skinned opposite number Freddie Steward, the full-back timed his run perfectly to collect Gibson-Park's pass after the scrum-half had cleverly tapped a quick penalty under the English posts. Keenan had the strength to dot down and Johnny Sexton converted.

Iain Henderson, who replaced the unlucky Ryan, was lucky not to get a yellow card when his hands slowed down possession at the ruck and England had the last say of the half with Smith tapping over to reduce the deficit to 15-9.

In the midst of all that, England lost Tom Curry and Kyle Sinckler to injury, with Alex Dombrandt and Will Stuart coming on.

Lowe broke clear at the start of the second half and when England had to concede a penalty as the defence scrambled, Gibson-Park again went quick, however, Henderson knocked on from Tadhg Beirne’s pass.

Andrew Conway then kicked the tightest 50:22 but a low-percentage offload from Tadhg Furlong brought that chance to nought.

A satisfied Hugo Keenan is hoping to lift a bit of silverware at the Aviva Stadium next week #RTErugby pic.twitter.com/3nMkODuQlx

England, once again, pushed Ireland back off the resulting scrum and Twickenham erupted.

Centre Joe Marchant won a turnover penalty after a Smith garryowen and England were back to within three points in the 53rd minute as the out-half tapped over his fourth kick. Farrell tried to refresh his front row, sending on Herring and Dave Kilcoyne for Dan Sheehan and Healy.

The ball refused to go out of play, it seemed, and Maro Itoje, who recovered from illness to take his place, sent Sexton backwards in the tackle after the Ireland skipper caught a Harry Randall box-kick.

Smith continued to rain down up-and-unders to the tune of Swing Low and England were making hay, Keenan knocking on to give England possession on the 22. That, almost inevitably, turned into a penalty and the Harlequins man, on just his ninth cap, levelled the match.

The 14 men had all the momentum now, and the question was what had Ireland in response.

Sexton, who confirmed this week his playing days would come to an end after next year’s World Cup, tapped over a penalty when Itoje slowed down a ruck ball close to the line.

Caelan Doris broke the line but his pass was behind Conor Murray and England survived.

But Ireland regained possession and then came to their senses, patiently holding onto the ball before working their superior numbers.

Henhsaw, who was on for Bundee Aki, made inroads and when Conway was stopped in the corner, Conan reached over for his second try in two games against England.

Sexton converted to make it 25-15 and Bealham crashed over with three minutes to play to make the final score a scarcely believable 17-point win for the visitors.

Ireland will now look to complete a Triple Crown when Scotland visit Dublin next Saturday.

A win there would leave Irish hopes pinned on England upsetting Grand Slam chasers France in Paris later that night. 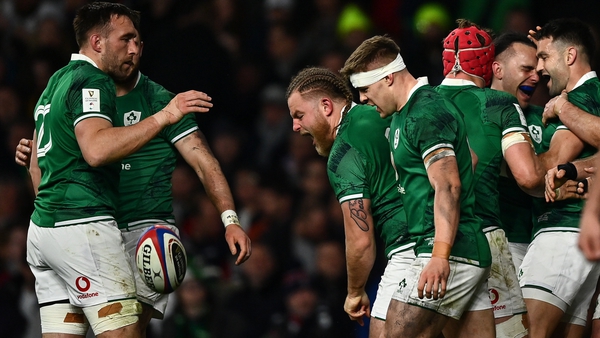