Yet that time was in the mid-1990s and newly declassified papers from Downing Street shed more light on – and remind us of – the central role the UK played in the construction of the Euro.

Our London Correspondent Sean Whelan has been looking through some of those papers and others relating to Northern Ireland and the Clinton White House.

But first, how close were the British to joining the Euro?

Closer than you might think from the debate on Europe going on in contemporary Britain, where it is all about the Brexit referendum, but back then the referendum talk was about whether the UK would hold a referendum on joining the single currency.

There is a confidential and personal note from number ten to number eleven, the home of then Chancellor of the Exchequer Ken Clarke, in which Prime Minister John Major wanted to float a form of words for a Commons statement on the circumstances of a referendum, which would be that if a Major-led government judged it was in the best interests of the UK to join.

The bill to join would contain a clause saying a referendum of the people must be held before the country could join. 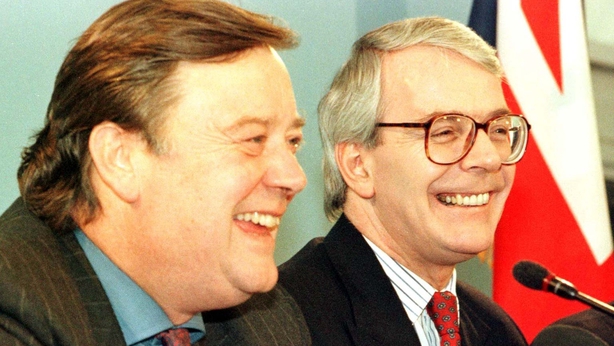 Faced with trenchant opposition from John Redwood – now a leading figure on the Brexit side – the official position of the Major government was to keep options open, deciding if membership was in Britain's interest at a time that suited Britain, but certainly not ruling it out.

In response to a demand from Redwood that the Tories commit to being the only British Party to oppose single currency membership in its election manifesto, another paper from Geoffrey Howe, Leon Brittan and others argued that "opposing EMU [Economic and Monetary Union] would engineer a permanent and radical shift in the Conservative Party against EMU. The Eurosceptics understand this, which is why they want it so much".

They wrote: "Any Conservative manifesto commitment against a single currency would inevitably divide the party, fuelling its electoral difficulties."

They also said the fiscal strictures of the Maastricht criteria were very appealing to conservatives - particularly the 3% deficit limit - as they were the equivalent of the US-balanced budget amendment, which was a big deal among US conservatives at the time.

Back then, the British government expected a number of countries would hold referendums on joining the Euro, but none were mentioned by name, not even Ireland.

The only paper I could find relating to Ireland was a note of John Major’s visit to Dublin on 22 December 1995, when he met taoiseach John Bruton and his rainbow coalition partners Dick Spring and Prionsias De Rossa. 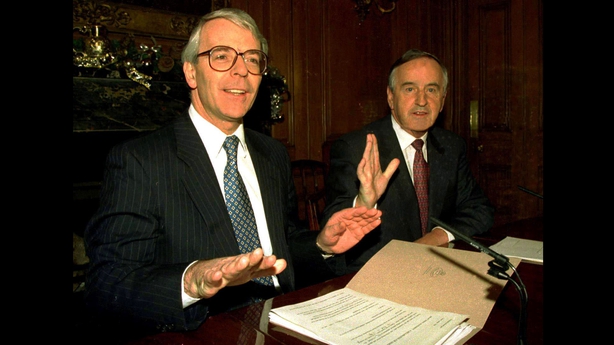 The note says a substantial part of the talks was about EMU. Major denied press allegations that his position – on keeping options open - was being driven by the pressure of sceptics within his own party.

He said there were practical issues about the single currency that troubled him, notably the divide it would open in the EU between countries that were members of the Euro and those that were not.

He also thought less than half the states would be able to join on economic performance grounds, and that pushing far too fast with the idea could wreck the EU.

The Taoiseach asked him for ideas on how to proceed and Major suggested parallel currencies that would converge over a longer period.

In the notes of a meeting earlier that same month with Italian Prime Minister Lamberto Dini, Major set out his dislike of the name – the Euro – for the new currency, saying he preferred the Florin or the Crown.

Indeed, earlier papers go into great detail about the various names, with Major repeating his dislike of the name Euro, but not a dislike of the idea of a single currency.

In the Dini meeting, Major said no country can meet the Maastricht criteria to join and it is very unlikely any country will meet them in 1997 or even 1999. He says nobody believes Spain, Portugal and Greece are serious contenders, while France has budget deficit problems.

Another issue the Major government faced about Europe was the review of the Maastricht Treaty and preparations for another treaty-making conference – what would eventually lead to the Amsterdam Treaty.

Indeed, the documents include a personal note from John Major to David Davis – the future – and now former - Brexit secretary, thanking him for his work on the treaty preparation group of ministers for undertaking "a lot of extra work of a pretty mind numbing variety". Incidentally, the French member of that group was Michel Barnier.

A diplomatic cable from the British ambassador to Germany Nigel Broomfield cautioned against Britain allowing itself to be painted as "fundamentally hostile to the whole idea of EMU" .

He said the way to do this was to concentrate on the vast amount of issues on which the German and British government agreed. "We should not pre-dispose them to thinking of us as immutably hostile to them on all European issues," the ambassador wrote.

There are few specific Northern Ireland papers in the batch declassified today, but the correspondence relating to America does add colour to the sometimes spiky relationship between the Clinton administration and Downing Street. 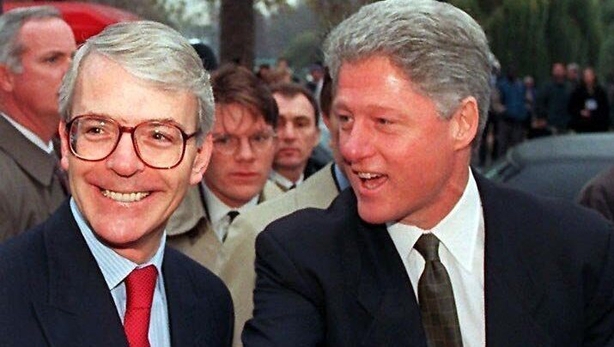 In particular, there is a series of papers concerning US diplomat Richard Holbrook's return to diplomacy amidst the war in Bosnia and the still very sensitive build-up to the talks that would eventually lead to the Good Friday Agreement – itself a feature of today’s Brexit drama.

The British were reluctant to allow the Americans into the Northern Ireland peace process, and were not keen on the Clinton administration granting visas and high level meetings to Gerry Adams.

The papers reveal a particular problem with Tony Lake, Clinton's then national security advisor, over his role in Northern Ireland affairs.

In one note on Holbrook’s visit to London, a civil servant wrote: "Holbrook privately repeated the grovelling apology he recently made to Robin Renwick (the British ambassador to the US) about the NSC's behaviour over the second Adams visit. He made a transparent pitch for us to work with him rather than the NSC over Northern Ireland, and said that he was trying to regain control of the subject for his bureau.

"While he should be a useful ally, I rather doubt if he will manage to override the negative influence of the White House. I tried to leave him with the impression that we intended to do things our own way irrespective of gratuitous input from the White House.

"He asked if there were constructive ways in which the Americans could use their dialogue with Sinn Féin. I expressed doubts about this, on the grounds that we did not want to negotiate with Adams by proxy, or legitimise his attempts to apply pressure to us through the United States."

There’s also a note to the British ambassador in Washington from Major's cabinet secretary, warning the ambassador that Holbrook would try to bypass normal channels and try to get direct access to the prime minister over Northern Ireland policy.

They intended – through use of flattery and selective meetings in Downing Street – to use Holbrook to as the note puts it "undermine the Lake/Soderberg/Kennedy/Adams axis on Northern Ireland".

Another paper notes a phone call from Tony Lake about a conversation he had with ex senator George Mitchell about becoming the Clinton administration lead on Ireland. 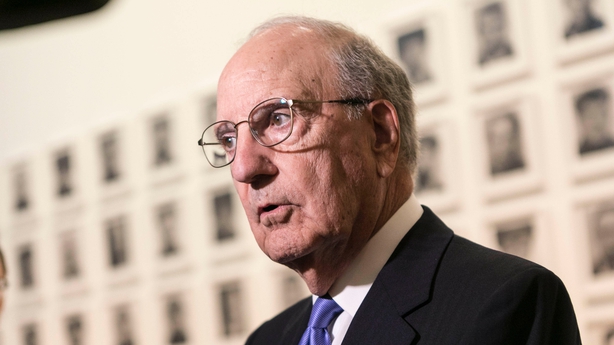 Roderick Lyne, Major’s private secretary, noted that he told Lake it was essential to include the economic reference in the title, "otherwise the old alarm bells would jangle".

Another file relates to the so-called "Death on the Rock" shooting of three IRA members by SAS soldiers in Gibraltar in 1988.

The British government was taken by surprise when in 1995 – seven years after the event - the European Court of Human Rights in Strasbourg ruled, unexpectedly and by a ten-nine majority, against the UK on one of six charges brought.

A lengthy correspondence among ministers about the court and whether or not the government should pay costs to the plaintiffs (they agreed to do this as not doing it would undermine British foreign policy on respecting courts and human rights – and the costs were a surprisingly modest £33,000).

A set of speaking notes was prepared for ministers stressing the court dismissed claims for compensation, and all but one of the charges brought against the UK.

The one complaint the court upheld was that the control and organisation of the operation was faulty in three ways – not keeping the suspects out of Gibraltar, relying too much on intelligence assessments, and taking insufficient care in the control of the use of lethal force.

The papers reveal that Downing Street only began preparing for an adverse finding a couple of days before the judgment was due, when diplomatic reports came in suggesting the court was deeply split and the ruling could go against the British, who had already won the case in the European Commission on Human Rights, who nevertheless referred it to the full court for a final decision.