US President Donald Trump has said that Saudi Arabia's crown prince told him he did not know what had happened in the Saudi consulate in Istanbul where dissident journalist Jamal Khashoggi went missing two weeks ago.

"Just spoke with the Crown Prince of Saudi Arabia who totally denied any knowledge of what took place in their Turkish Consulate," Mr Trump said on Twitter, referring to Crown Prince Mohammed bin Salman.

Mr Khashoggi, a US resident and leading critic of the crown prince, vanished after entering the Saudi consulate in the city on 2 October.

Turkish officials say they believe he was murdered there and his body removed, which the Saudis strongly deny.

...during the call, and told me that he has already started, and will rapidly expand, a full and complete investigation into this matter. Answers will be forthcoming shortly.

Mr Trump dispatched US Secretary of State Mike Pompeo to Riyadh to discuss the Khashoggi disappearance with the leaders of Saudi Arabia, a US friend for decades and an ally against Iran.

Mr Trump wrote on Twitter that the crown prince was with Mr Pompeo during the phone call with the president "and told me that he has already started, and will rapidly expand, a full and complete investigation into this matter. Answers will be forthcoming shortly".

US media outlets reported yesterday that Saudi Arabia will acknowledge Mr Khashoggi was killed in a botched interrogation.

Overnight, Turkish crime scene investigators entered the consulate for the first time since Mr Khashoggi's disappearance and searched the premises for over nine hours. 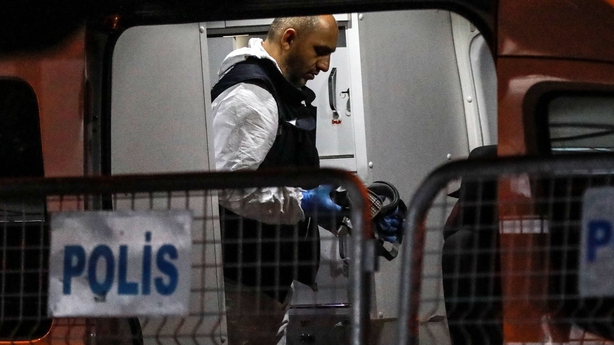 Turkish investigators are expanding their search to include the Saudi consul's residence in Istanbul and consulate vehicles, Foreign Minister Mevlut Cavusoglu said.

The Khashoggi case poses a dilemma for the United States, Britain and other Western nations.

Saudi Arabia is the world's top oil exporter and spends lavishly on Western arms and is a major Sunni Muslim ally.

The United Nations human rights chief has said immunity on diplomatic premises and officials should be lifted for the investigation.

Mr Trump has threatened "severe punishment" if it turns out Mr Khashoggi was killed in the consulate, but ruled out cancelling arms deals worth tens of billions of dollars.

European allies have urged accountability for those responsible.

Many members of the US Congress, which has long had a testy relationship with Saudi Arabia, have issued strong criticism of the kingdom.

Saudi Arabia has said it would retaliate against any pressure or economic sanctions "with greater action," and Arab allies rallied to support it.

Members of Mr Khashoggi's family have called for "an independent and impartial international" investigation.

His fiancee Hatice Cengiz, who was waiting outside the consulate the day he disappeared, tweeted a Koranic verse warning those who kill on purpose, with the hashtag "Jamal is the Martyr of the Word".