An Irish diplomat is among a number of western officials who have been ordered to leave Russia. The development is a response to Ireland's decision earlier this week to expel one Russian diplomat.

The Department of Foreign of Affairs confirmed the expulsion of one Irish diplomat from Russia.

A spokesperson for Tánaiste and Minister for Foreign Affairs Simon Coveney said there was no justification for it.

He added that the department's staff did not engage in activities that were incompatible with their diplomatic status.

On Tuesday the Government announced that it was expelling one diplomat from the Russian embassy in Dublin.

At the time the Russian Ambassador to Ireland, Yury Filatov, said that the decision to expel the diplomat would "not go unanswered".

Earlier today, Russia summoned a slew of senior western diplomats to tell them how many of their embassy officials it was expelling in a worsening standoff with the west over the poisoning of a former Russian spy and his daughter in the UK.

Russia announced yesterday that it was expelling 60 US diplomats and would eject scores from other countries that had joined the UK and United States in censuring Russia over the poisoning of Sergei Skripal and his daughter Yulia.

Britain and Russia have already expelled 23 of each other's diplomats over the first-known use of a military-grade nerve agent on European soil since World War Two, but Laurie Bristow, Britain's ambassador, was summoned again this morning.

The Russian Foreign Ministry said in a statement Mr Bristow had been told Britain had one month to cut its diplomatic contingent in Russia to the same size as the Russian mission in Britain.

It was not immediately clear if that meant a serious cut in staff numbers.

A spokeswoman for the British Foreign Office said Russia's response was regrettable and that Russia was in flagrant breach of international law over the killing of the former spy.

The poisoning, in southern England, has united much of the west in taking action against what it regards as the hostile policies of Russian President Vladimir Putin.

This includes US President Donald Trump, who Mr Putin had hoped would improve ties between the former Cold War counterparts.

Russia rejects Britain's accusation it stood behind the attack and has cast the allegations as part of an elaborate western plot to sabotage east-west relations and isolate Russia.

Yesterday, the hospital where Ms Skripal is being treated said she was getting better after spending three weeks in a critical condition due to the nerve toxin attack. Her father remains in a critical but stable condition.

The BBC, citing "separate sources", reported this morning that Ms Skripal was "conscious and talking".

The Russian Foreign Ministry said in a statement it was summoning the representatives of a "raft of countries" that had taken what it called unfriendly action against Russia in solidarity with Britain because of the Skripal affair.

"The envoys will be handed protest notes and told about the Russian side's retaliatory measures," the ministry said. 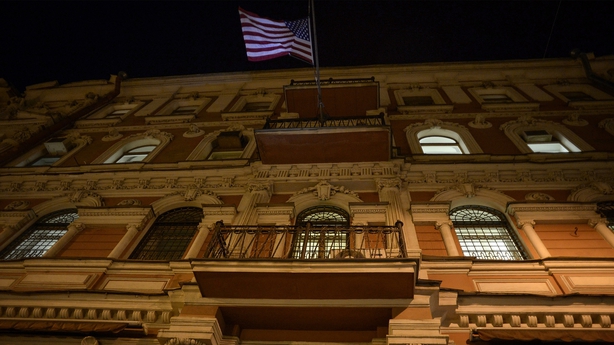 Embassy officials from France, Germany, Italy, Poland, the Netherlands, Croatia, Belgium, Ukraine, Sweden, Australia, Canada and the Czech Republic were all seen arriving in their official cars at the Foreign Ministry building in Russia.

The US and a range of western countries, including Ireland, are expelling around 130 Russian diplomats and Russia has said its own measures will precisely mirror those actions.

Among those nations whose diplomats were shown the door were the Netherlands, Germany, Italy, Finland, Poland and Lithuania.

Russia announced that it will expel four German diplomats in response to Berlin ordering four Russian agents to leave Germany.

In a statement, German foreign minister Heiko Maas said that the decision by Moscow was "not a surprise".

The US State Department said after Russia announced the expulsions yesterday evening, that it reserved the right to respond further, saying the list of diplomats designated for expulsion by Russia showed Moscow was not interested in diplomacy.

In a conference call with reporters, Kremlin spokesman Dmitry Peskov disagreed with that assessment, saying that Mr Putin still favoured mending ties with other countries, including with the US.