Spare a thought for Boris Johnson.

The inconclusive US election result leaves him twisting in the wind of political fortune at precisely the moment he, and the EU, and the rest of us might have expected some clarity in the US to inject some clarity and impetus in politics on this side of the Atlantic.

For Boris Johnson, a win for Joe Biden presents immediate problems - but also the possibility of medium-term opportunities - in Britain's key international partnership. 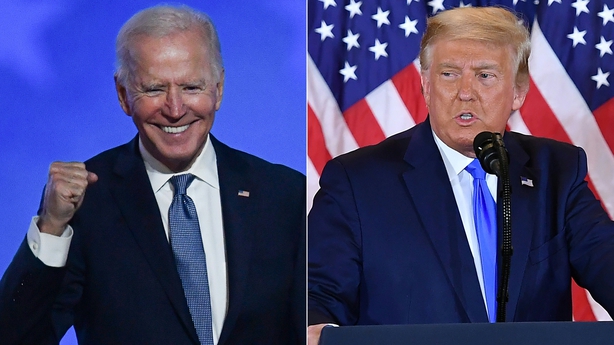 That immediate problem is what to do about the UK Internal Market Bill, and its connected issues of post-Brexit trade deals with the EU and US.

The Internal Market Bill is the piece of British legislation that contains the "law breaker" clauses that could override the Brexit Withdrawal Agreement and its "Front Stop" arrangements for Northern Ireland, (designed to avoid a hard border on the island of Ireland - a key objective of the Good Friday Agreement, which the US played a key role in brokering).

Mr Biden - who was never a fan of Brexit - made it clear in September that if the Internal Market Bill put the operation of the Good Friday Agreement in doubt, there was no prospect of a UK/US Trade Agreement - something greatly prized in British Government circles.

But while Donald Trump has been voluble in his support for Brexit and a new UK-US trade agreement, he too has backed away from the Internal Markets Bill.

His trade representative, Robert Lighthizer, told a Senate hearing in June that anything that threatened the Good Friday Agreement would not get past the US congress.

Such would be the opposition he would not bother bringing such a deal to Capitol Hill. And he said that President Trump understands and agrees with that position.

Those talks are continuing, covering some 30 different negotiating groups. How fast they come to a conclusion depends on a couple of things.

How fast (if at all) the UK and EU can reach a trade deal and how fast, as a consequence, the US/UK talks can reach a deal (Congressional agreement to a fast-track approval for a trade deal runs out in July, meaning a UK deal would have to be wrapped up for ratification by the end of April – otherwise a new approval has to be negotiated, and that takes time).

And does the UK Internal Market Bill become an Act of Parliament with the "law breaker" clauses intact?

A Trump victory would presumably mean Ambassador Lighthizer stays in his job and can push the trade talks to a conclusion pretty rapidly in the spring.

The deal would presumably have Presidential support, and could clear the fast-track approval process in time.

A Biden victory could see that process slow right down - there would probably be a new US trade representative, and there is doubt that Joe Biden would expend much political time and capital (if any) in pushing a UK trade deal - it is just not a priority for him early in his presidency. 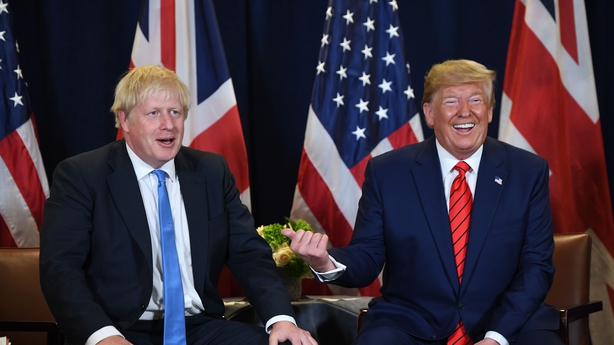 For the British side, the win from an early trade deal with the US is almost entirely symbolic.

The British government's own analysis shows the economic gain from the kind of deal under negotiation could add at most 0.16% of GDP to the UK economy after 15 years.

A smaller deal could add just 0.07% over the same period (this contrasts with UK Treasury estimates of a 7.6% shrinkage in the UK economy if there is no trade deal with the EU, and 4.9% decrease in economic output even with a so-called "Canada-style" agreement).

The big fight in the UK/US trade talks is (as is so often the case) over market access for US agricultural produce. This is an issue on which Republican and Democrat politicians do agree - both parties want more access for US farm produce in trade deals.

This has produced a very strong reaction in Britain in two bastions of Conservative Party support - the Farm lobby and the Mail on Sunday.

The MoS has been the mouthpiece for a very strong farm lobby campaign designed to scare politicians of making big concessions to the American side.

The argument can be summed up as Chlorine Chicken and Hormone Beef. The political groundwork on this issue was done by the Remain side of the Brexit argument, but has been carried on this year by the Brexit supporting Mail, and by the Farm lobby.

Such has been its effectiveness that the Johnson government has conceded some ground on the issue, with a new advisory body on food standards.

But opponents say it still leaves the door open to US imports of said Chlorine washed chicken and beef produced cheaply with growth promoting hormones.

Either way, a UK/US trade deal gets done fast, or slow, depending on who ends up as President.

The more vexed issue of trade in agricultural goods may determine the scale of the trade deal - crudely put, if the food is off the table, the size of the deal (and its economic impact) is smaller.

So as things stand today - 4 November - the UK is in a vice grip, caught between the EU trade talks and the US trade talks, with both nearing an end of some sort, but with clarity assured in neither.

The British press has been making much of the "frantic" efforts by the government to repair relations with the Biden Campaign and Democratic party more generally.

But for the UK foreign policy establishment, a Biden presidency presents Britain with an opportunity for some foreign policy wins that could help, not just relations with the US, but with the EU as well.

Those key areas are security policy, Iran, and climate change.

On all three the UK position is in closer alignment with a Biden presidency rather than a Trump presidency. This is to be expected.

Joe Biden is a foreign policy expert, and was drafted into the Obama campaign precisely for his deep knowledge of foreign policy issues. A regular at the Munich security conference down the decades, he is strongly Atlanticist, a big supporter of NATO - and Britain’s role in European security.

This has been seen as one of the truly strong cards the British have to play in their future relationship talks with the EU.

Fate has also dealt the UK some potentially useful dates in the year ahead - starting with chairmanship of the UN security council in February, the first month of the new presidential term, and a good calling card to get the foot in the door of the White House if there is a transition.

The UK sees an opportunity in a Biden presidency to get the US back into the Iran nuclear deal (obviously a Trump win changes that calculus utterly).

The UK also takes over as chair of the G7 in January - so will be closely co-ordinating with the White House in that forum.

And Britain will host the COP26 climate change conference in December 2021 (delayed from this year). Today - 4 November - the US formally leaves the Paris climate accord, which President Trump ordered in 2017.

Joe Biden wants the US back in, and the British see the COP26 summit as the best opportunity to both get the US back and be seen to be in closer alignment with the US on an issue that has widespread public backing among the British public (and strong personal support from Mr Johnson). 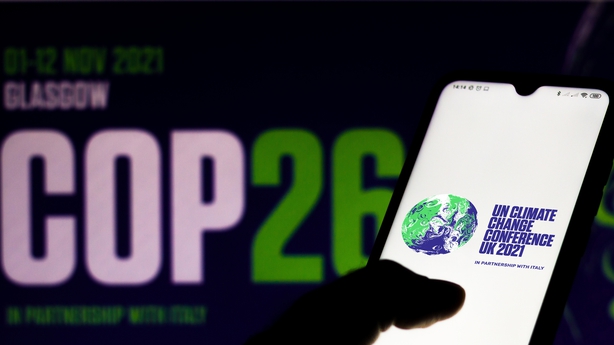 While climate change policy has come to be widely recognised by diplomats as a pressing security policy issue, Donald Trump’s anti-NATO tone has shaken European countries, and the UK establishment is more comfortable with Joe Biden's clear pro-NATO position.

A change in tone and substance on these topics would go a long way to reducing tensions in European politics in ways that may also ease the relationships frayed by Brexit.

The same is true of what is now widely regarded as the new security priority for 2021 - the management of this and future pandemics.

The US election campaign has in great part been dominated by the different attitudes to Covid-19 displayed by the candidates; Biden, mask wearing, socially distanced rally's - Trump mask disdaining, jam-packed rallies (and Covid rampant in the White House).

Mask wearing as a symbol of state control of society (rather than a public health measure) has become a piece of ammunition in America’s culture war.

But American political and cultural arguments have a strong tendency to break out elsewhere in the democratic world, particularly this side of the Atlantic.

And in the case of the Covid culture war, the first landing zone looks like it going to be in Britain.

Its new rallying point is opposition to mandatory mask wearing and Covid-19 lockdowns. Its first target is next May's local elections in England.

Constituency by constituency polling carried out last month shows that while President Trump is unpopular among the British public, and would not get a majority in any UK constituency, his supporters do tend to be congregated in those constituencies that voted for Brexit.

While the Brexit Party and its fore-runner, UKIP did well under a proportional election system in European Parliament elections, Britain’s 'first past the post’ voting system will disadvantage it when it comes to getting seats.

But that matters less than the platform that it will afford Mr Farage over the next six months to scare Conservative MPs - particularly those newly elected in the so called "red wall" seats.

Those Tories reeling at the current lockdown measures will be forced to stand firm, and will be less easily bought off - because they fear being outflanked by Mr Farage. The Covid rebels are also mostly hardline Brexiters.

For the same reason, they will be more difficult to square off if Prime Minister Johnson cuts a deal with the EU, which of necessity will involve compromises of some sort. Selling that deal will become harder with Mr Farage back in the field.

It will become much, much harder with Mr Farage back in the field backed by President Trump starting a second term in the White House, disparaging anti-Covid measures, disparaging NATO, refusing to go back into the climate change accord, refusing to rejoin the Iran nuclear deal, and pushing Britain to cut a trade deal that could force it into a more radical break with the EU than key business and political stakeholders want.

So, spare a thought for Boris Johnson, while he - and we - wait for the definitive result from the US.