Independent presidential candidate Peter Casey has visited a new housing estate for members of the Travelling community in Thurles, Co Tipperary, just days after he made controversial comments about Travellers.

A number of families are refusing to move into homes at the €1.7m Cabragh Bridge development, because of a dispute with Tipperary County Council.

Mr Casey has claimed this is because the families are demanding that the council provide stables for their horses, something he described as "blackmail".

On the 'Floating Voter' Podcast on the Independent.ie website earlier this week, Mr Casey claimed that the State's recognition of the Travelling community as an ethnic minority was "a load of nonsense".

He also described Travellers as "basically people that are camping on someone else's land" and asserted that they were "not paying their fair share of taxes in society".

Today, he left Cabragh Bridge without speaking to members of the Travelling community nearby.

Mr Casey said that he made the visit to highlight the fact that there are people homeless in Dublin while the six houses in Thurles are empty.

When asked if the visit represented a media photo opportunity or a stunt, he said he would be doing something similar next week when the subject of his criticism would be the telecommunications regulator Comreg and those responsible for the failure of the national broadband policy.

There was a large garda presence in the area during the visit.

In a statement released on behalf of the Traveller families, they deny demanding stables or "paddocks" from the council and say they agreed to move to the houses if "grazing land" was provided for their horses.

Meanwhile, the National Traveller Movement accused Mr Casey of adopting the tactics of US President Donald Trump by coming to Tipperary in what they described as "a media stunt".

Accommodation Officer for Travellers TJ Hogan said Mr Casey had used entirely similar tactics adopted by Mr Trump during the US presidential election anD he was not interested in dialogue with the local Travellers.

Mr Hogan said Mr Casey had failed to meet Travellers and he had no interest in their rights or their living conditions. 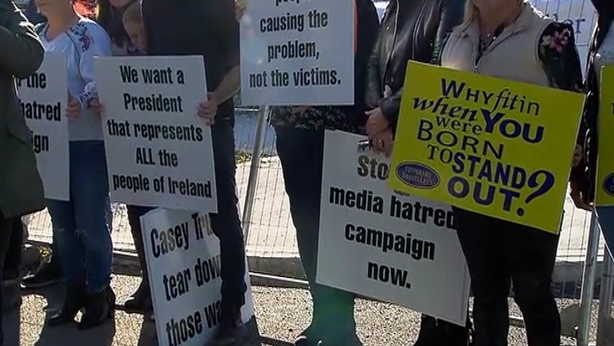 Taoiseach Leo Varadkar has said Mr Casey's remarks were "very divisive and largely designed to get attention for him and his campaign".

"I think that's really regrettable, and I hope when people go out to vote next Friday they will give him that message," he said.

Speaking on RTÉ's 6.1 News, Independent Presidential candidate Seán Gallagher has said he would not be calling on his campaign rival, Peter Casey, to withdraw from the election, but he said his comments concerning the Travelling Community are doing untold damage to the progress that community, as a minority, had achieved.

The National Traveller Movement has accused independent presidential candidate Peter Casey of adopting the tactics of Donald Trump and engaging in a media stunt | https://t.co/ZWbjvMXarL pic.twitter.com/JjD0JNXLUz