The Royal College of Obstetricians and Gynaecologists review of CervicalCheck slides has found that in 159 cases there were missed opportunities to prevent or diagnose cancer earlier.

It represents 15 % of cases reviewed.

In a further 149 women, the review panel disagreed with the CervicalCheck slide reading but they did not believe this had an adverse impact on the woman's outcome.

In total, the review disagreed with a third, or 308, cases out of the 1,038 women with cancer who took part.

The failures first came to light in April last year, with the settlement in the Vicky Phelan High Court case.

The Limerick mother-of-two was diagnosed with cancer three years after her smear test results of 2011 were incorrectly reported as clear. She now has terminal cancer.

The screening service failed to tell women their original slides had been reviewed and that some women may have benefited from earlier care.

Since the issue became public, a number of women have died.

Professor Henry Kitchener, lead assessor for the RCOG review, said that in recognising the serious consequences that screening failures have for affected women, it was important to also recognise the inability of cervical screening to prevent all cases of cervical cancer.

The review found missed opportunities to prevent or diagnose cancer earlier in some women but overall it found the Irish cervical screening programme is performing effectively.

The independent review of the slides found that in close to 30% of cases, it determined a different result than the original finding.

The review was ordered by the Government in May last year in the wake of the CervicalCheck controversy.

The review found that the pattern of discordance (where the RCOG slide review result differed from the original CervicalCheck result) resembles the NHS screening programme in the UK.

Ahead of the publication of the report, questions had been raised about how some cases were managed in the review process.

RTÉ News has learned of concerns by some women about RCOG review reports that had to be returned by the Health Service Executive to the UK team, due to apparent inaccuracies or omissions.

Read:
CervicalCheck controversy - A timeline of key events
Taoiseach apologises for 'disrespect and deceit' over CervicalCheck failures
The 50 recommendations of the Scally Review

In some cases, slides were mislabelled, women were told their original smear test result was correct, only to be later given a different result.

In other cases, women were told their original slide was not available for review and later told their slide had become available.

The RCOG Group apologised for the distress caused in certain cases by the problems.

It is understood that some of the key campaigners in the 221+ CervicalCheck Patient Support Group did not attend the RCOG briefing. 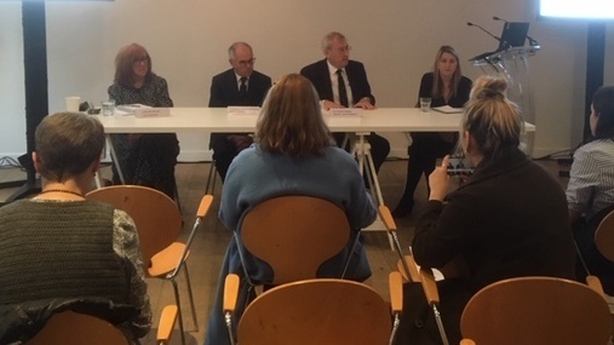 Following publication, the Minister for Health Simon Harris said women should have confidence in the CervicalCheck screening programme.

He said there had been a great uncertainty over the screening programme but that it is now clear CervicalCheck is working effectively, that it is working in line with international norms and that year on year it is saving lives and driving down mortality rates from cervical cancer.

He referred to the conclusions of the report, and said it was extremely devastating that in 29.8% of cases in Ireland, things were missed.

Minister Harris thanked all the women and their families who participated in this report.