Fiona Buckley pointed out in a 2013 paper published in Irish Political Studies that in the first 90 years of the State only 92 women were elected to Dáil Éireann.

Gender quotas are now in place for Dáil elections. Parties must ensure that no less than 30% of their candidates are women or they will obtain only half of the public contribution made to election expenses.

Such quotas are not in place for local and European elections.

The need to have a good selection pool for Dáil election incentivises parties in the locals, and Adrian Kavanagh has estimated that almost 30% of city and county council candidates are women.

Among the larger parties Fianna Fáil has the lowest proportion and Sinn Féin the most, but numbers are higher again for Labour, the Greens, Social Democrats and People Before Profit.

In this year's European Parliament elections there is a larger share of women on the ballot. Over 40% of the candidates are female, and more than 50% of candidates from the larger three parties, although just one from Fianna Fáil.

Gender quotas were justified by the argument that the nomination stage was the barrier to be overcome: parties were the problem, not voters.

Intensive analysis of several waves of Irish election studies showed clearly that in general elections female candidates were no less attractive to voters than their male counterparts, other things being equal.

To the extent they fared worse, it was due to the advantage of incumbency, and that was disproportionately a male preserve.

Those selecting candidates have in the past claimed voter antipathy as the reason for the lack of women nominated. There is no justification for this beyond the fact that there are fewer women with political experience, but that is the fault of party selectorates.

Men and women might differ with respect to their party choice, but we have not found evidence in general elections that gender matters in candidate choice. One problem in exploring this is that survey samples have so few cases within any one constituency, and in the past there have also been so few women candidates.

European elections do offer something of an opportunity, because the samples for each constituency are so large. They also provide a chance to consider the basis of voting choice in elections where parties are arguably less important than they are local and general elections. So: is there any sign that women tend to prefer women candidates in these elections, or that men prefer men?

Last week’s RED C/Sunday Business Post poll was based on around 700 voters in each of the three constituencies and RED C’s website provides the tables on the popularity of each candidate by the gender of the voter.

There are some striking contrasts. The most notable is that Frances FItzgerald wins the support of 22% of women, but only 13% of men: women were almost twice as likely as men to give her a number 1. This is a big gap, greater than the margin of error. But it is not reflected across the poll.

There is no such difference in support for another big Fine Gael name, Mairead McGuinness, although her running mate is also female. And while there are differences between candidates, across the board there is no tendency for women to be more likely to choose a woman than for a man to do so.

For the previous European elections in 2014 we have an RTÉ exit poll which has the advantage of having almost twice as many cases as well as telling us how people did vote rather than how they might vote. There were fewer women candidates on that occasions, but at 37% the figure was higher than for the Dáil in 2016.

It appears that was a slight gender bias in the 2014 European election, with women being somewhat more likely than men to vote for a woman candidate.

46% of women gave their first preference to a female candidate as opposed to just 38% of men. 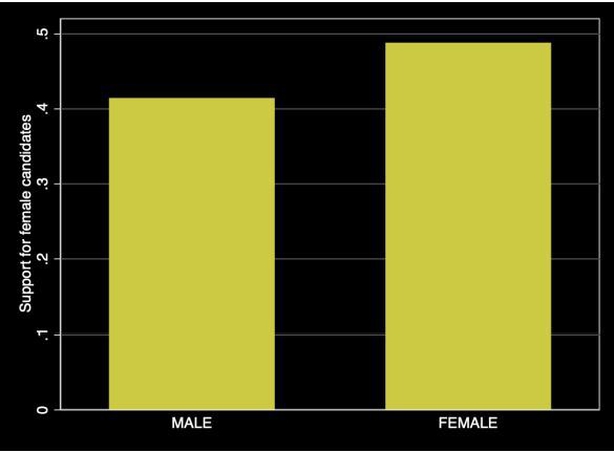 This is significant statistically, even if it is not a large difference. However, because it is a relatively small difference it does make sense to see how stable it is across different groups of voters. The downside of this is that as the focus is narrowed, the variations other than gender across candidates become potentially more important.

It could be that men voted for parties without, or with fewer, women as candidates for reasons quite unrelated to gender. But if we allow for party choice, the gap persists across almost all parties. 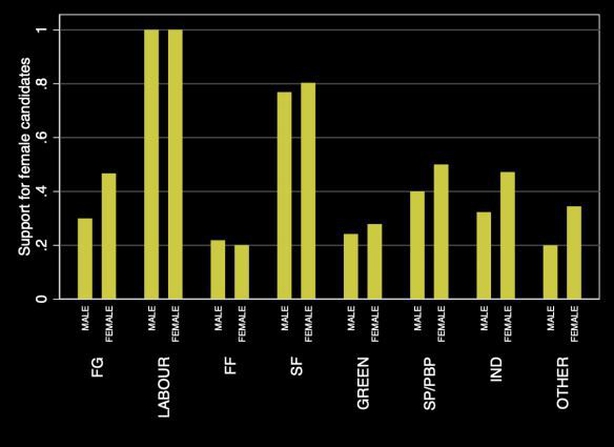 There is no such difference among Fianna Fáil voters (where there was only one woman candidate, Mary Fitzpatrick in Dublin) and very little within Sinn Féin voters. Labour ran only women candidates.

The clearest difference is among Fine Gael voters, but there is also a difference to varying degrees among Green, People Before Profit, independent and Other party voters.

We can look at this more closely by analysing voting in Fine Gael, the only party to run a mixed slate, where voters had the option of giving a first preference vote for a male or female Fine Gael candidate.

Across the two constituencies, the male and female candidates got almost the same level of support in the exit poll. However, amongst the 500 or so Fine Gael voters in the sample in these areas, 59% of women gave their first preference to a female candidate as opposed to just 39% of men.

Almost half of these Fine Gael voters gave their second preference to another candidate from the same party, and among these the gender gap is still much the same, as it is for those who did not give Fine Gael their second preference. This suggests it was not the case that the gender of the candidate drew in voters but that, once there, women were somewhat more likely to pick a woman and men to pick a man. 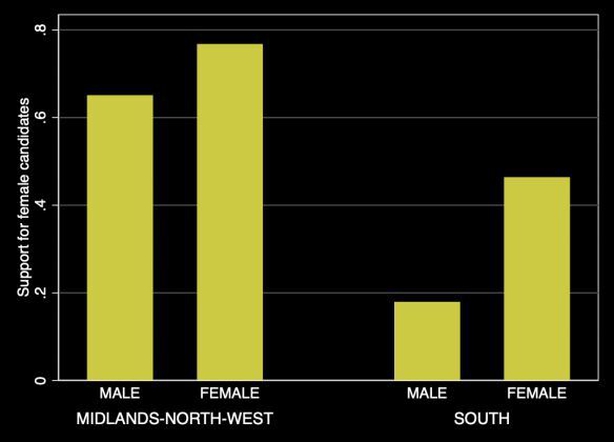 However, the difference was bigger in the South, where relatively few men voted for the female candidate (or perhaps more men voted for Seán Kelly).

The graphic below shows the pattern for Independent voters. 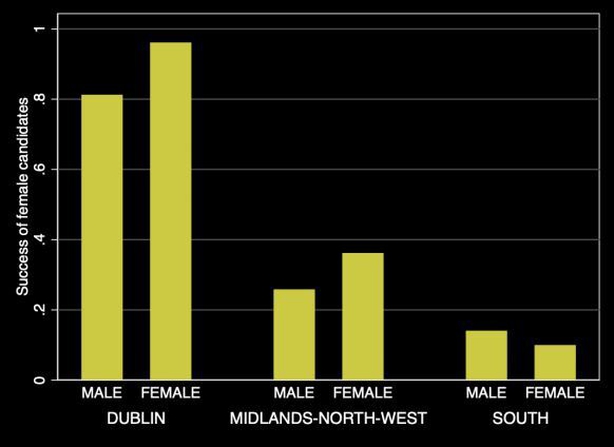 Among those voting Independent the gap is also around 10%, but it is variable across constituencies and is reversed in South.

In sum, we do see a fairly consistent, if small, difference between choices made by men and women. This is more marked in some parties than others and, within parties, more marked in some constituencies. It could simply be that in some contests there were reasons for gender to matter in candidate choice, but in some there were not - a conclusion that might also be drawn from the RED C poll.

Perhaps 2019 will show even less evidence of gendered voting. We will see on Sunday.