A replica of a 2,400-year-old log boat, that lies on the bottom of Lough Corrib, was launched in Co Galway this afternoon.

It has been partially excavated and recorded by Karl Brady of Ireland's National Monuments Service's Underwater Archaeology Unit.

The replica has been crafted by Mark Griffiths, as part of the Pallasboy Project, an international collaborative study established at University College Cork.

The craft has some other unusual features including an in situ steering oar, an iron spearhead and most notably an early Iron Age socketed and looped iron axe still in its gracile carved, two-piece handle and fixed into position under one of two 'seats'.

The 'tank-like' profile of the stern and bow, and the amount of heartwood remaining on the original, has raised questions concerning its buoyancy It has been suggested the vessel might have been deliberately sunk, perhaps as part of a prehistoric ritual and was never intended to be used for everyday transport or travel.

The replica has been crafted by Mark Griffiths, from a single oak trunk, over a period of 18 days at the Meitheal Mara community boatyard in Cork City, using a combination of replica prehistoric and modern tools.

Dr Benjamin Gearey, Department of Archaeology, UCC said: "This is a unique opportunity to see a replica of one of the many prehistoric vessels that lie in the watery depths of Lough Corrib.

"This will be an exciting test of some of the unanswered questions concerning the Lee's lsland five boat and we are keen to see how she takes to the water!"

The Pallasboy Project, in partnership with Moycullen and Oughterard Heritage, explores the creative process involved in the crafting of prehistoric wooden artefacts starting with the 'Pallasboy Vessel', an Iron Age wooden artefact discovered in 2000 at the Toar Bog in Westmeath and moving on to Bronze Age anthropomorphic figurines and prehistoric watercraft, specifically the enigmatic Lee Island five log boat.

The project has been documented by photographer and former archaeologist Brian Mac Domhnaill and laser-scanning expertise was provided by UCC digital humanist Orla Peach Power.

The project was funded by the World Wood Day Fund via the International Wood Culture Society.

After the test launch at Knockferry Pier in Moycullen at 3pm this evening, the replica log boat was gifted to Moycullen Heritage Society. 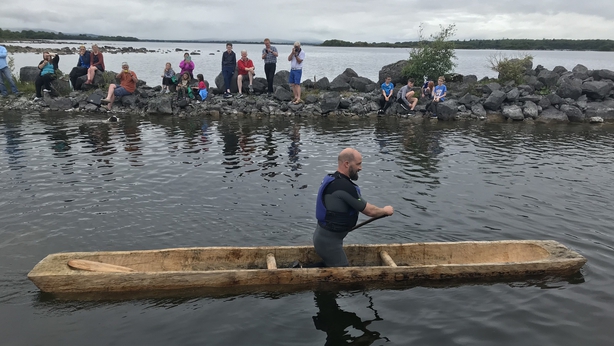