The Government could have to borrow up to €5 billion to cushion the blow of a no-deal Brexit.

Budget plans revealed in today's Summer Economic Statement show that a hard Brexit would flip the Government’s budget arithmetic around.

Instead of running a €1.2bn surplus, a no-deal Brexit would leave the Government having to borrow almost €5bn.

The borrowings would be needed to keep current and capital spending plans on track, as well as paying for extra social welfare for an estimated 50,000 job losses, and support packages for industries hard hit by Brexit, notably in the agri-food sector.

The Summer Economic Statement proposes a single budget programme to deal with two different scenarios; one in which there is an orderly Brexit and Britain keeps its current trading relationship with the EU; the other, a disorderly or no-deal Brexit, which causes job and tax losses, and additional demands on social welfare.

Next October's Budget will involve a package worth €2.8bn, Minister for Finance Paschal Donohoe said as he published the economic statement.

However, €2.1bn of that is already committed to current and capital spending plans, which leaves just €700m to be allocated on budget day on 8 October.

This is three weeks before Britain is due to leave the European Union.

The economic statement also targets a budget surplus of 0.4% of GDP as being appropriate to an economy at the top of an economic cycle.

However, the Budget also has to account for the possibility of a disorderly, or no-deal Brexit, which is expected to deliver a severe economic shock to the economy.

In that case, the Government proposes to spend more on social welfare provisions and targeted support schemes.

Along with the loss of revenues associated with an economic shock, the Government is planning to borrow funds to pay for extra spending.

This would result in a deficit on between -0.5% and -1.5% of GDP, depending on the size of the economic shock.

IRL summer economic statement estimate of the impact of a no-deal Brexit on  Irish economy over next five years, and its budget impact.  In short, back to borrowing to cushion the blow. pic.twitter.com/IhJxe0YLub

A decision on which case will become the central scenario for planning October's budget will be taken in September, when more information will be available to the Government concerning the Brexit situation.

"The external environment is becoming increasingly challenging, and at this point in time a disorderly Brexit is a real possibility," Minister Donohoe said.

"That is why I am setting out two budget scenarios in this SES - the first involving an orderly Brexit occurring, while the second involves a disorderly scenario."

The Summer Economic Statement said the "appropriate budgetary strategy must be to avoid further inflating the economy and, concurrently, build up resources which can be deployed in the event of the UK leaving the EU without a trade agreement at the end of October".

"In summary, the economy is caught between possible overheating on the one hand and the very real possibility of a disorderly Brexit on the other hand," it said.

It added that budget policy must take account of the fact that "the virtual attainment of full employment means the budgetary policy must lean against the wind, it must be counter cyclical so the mistakes of the past must be avoided".

Speaking at today's press conference, he said the Government was outlining two different scenarios for the country, but one Budget. 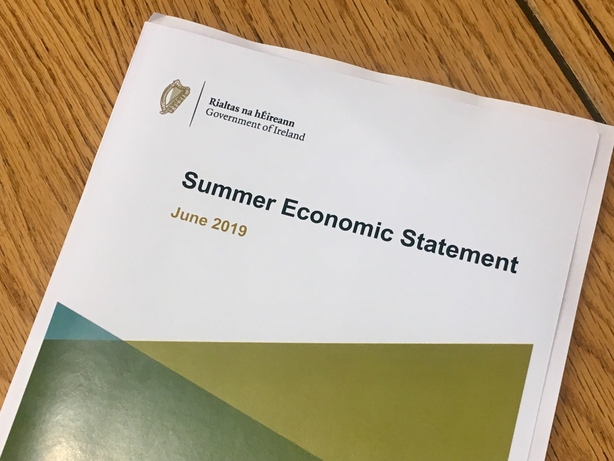 Mr Donohoe said the first scenario outlines what the economy will look like in the event of an orderly resolution to Brexit - an extension of current arrangements for the UK's trade relationship with the EU.

He said that will result in an environment of continued growth.

The second scenario outlines what will happen in the event of a no-deal Brexit and Mr Donohoe said this builds on the Stability Programme Update published in April.

He said from an economic point of view we would have an economy that instead of growing 3.5-3.75% next year would grow by just 0-1%.

He also said the Government believes the early years of Brexit would result in 50,000 jobs being lost, which he described as a major challenge.

Finance Minister @Paschald says it would be "unhelpful.. to intervene in the leadership process that is underway in the Conservative Party" but that "the debate that is underway has made clear to me what is the right thing to do" (in terms of budget preparations)

To respond to this, Mr Donohoe said the Government would allow its finances to move into a deficit position to deliver two really important goals.

The first of these is to ensure that we have the resources to meet the needs of citizens who lose their jobs as a result of Brexit, the so-called Automatic Stabilisers.

He said the type of supports that are available through our social welfare and taxation system will be maintained.

The second goal is that the Government will ensure that the parts of the country and economy that need resources will have them to get through the Brexit period.

He said the resources available will be along the lines of those suggested by the Fiscal Advisory Council.

This would put in place resources for demographic change, commitments to public servants and money to go ahead with a planned increase in capital spending next year of €700m. The minister said the Government this year increased capital spending by 24%.

"We will increase that investment by a further €700m to continue the work we have started to ensure our economy gets what it needs and ensure additional spending at a time of an economic shock," he said.

That will leave €700m of unallocated resources and it will be up to the Cabinet to allocate that sum, and indicate how that sum could grow if it introduces further tax measures to raise revenue, he added.

"If we have an orderly Brexit we will target a surplus of 0.4% of GDP. In the event of a no-deal Brexit we will run a deficit to be determined on Budget day," the minister stated.

"We are giving our best judgement at this point in time of the scenarios we will have to grapple with in the autumn. The budget parameters I believe are the safest parameters for dealing with those scenarios," he added.

Speaking on RTÉ's Six One, Mr Dnohoe said that if Brexit has been avoided or an orderly agreemnt is reached, then the Government will be able to proceed with committments and progress made on tax and social welfare.

He said that this is because the economy has been growing and the national finances are under control.

However, the minister said that if the Government faces the challenge of a disorderly Brexit, it will need to mobilise all of the country's resources to ensure that those who might be at a risk of loosing their job, will get the support and protection that they need.

He said that a strategy will be required to help the economy recover more quickly.