Paschal Donohoe, the Finance Minister, approached the country's economy as a doctor might speak to a patient.

In a nutshell, that was the Minister's proposition as country edges closer to Brexit.

The Department of Finance has outlined a range of predictions to indicate what might happen if the UK jumps from the European Union without a parachute.

Some observers suggest nobody can be sure what the effects of Brexit will be on the British economy or on Ireland for that matter.

Even before it happens, it is worth looking at the diary over the coming months. The deadline of 31 October for Britain to leave the EU is open to question.

The Tories will select a new British Prime Minister towards the end of July, Europe goes on holidays in August and the end of September is dominated by party conferences in the UK. That is followed by a crucial European summit in mid-October.

It is easy to see how the exit date could slip, despite reassurances to the contrary from candidates for the Tory party leadership.

In Ireland, the Budget is scheduled for 8 October, three weeks before the Brexit date.

Paschal Donohoe has ruled out a supplementary Budget. That is a mechanism that would allow him amend his financial package a later date.

So he is going for one Budget and hoping he can read the lie of the land in advance. He is facing two choices: hit the brakes or apply the accelerator.

Paschal Donohoe says that the Irish economy is showing "some signs of overheating".

In that scenario, the normal course of action is to take money out of the economy in order to slow things down.

But deliberately hitting the brakes ahead of a no-deal Brexit, which could lead to a downturn, would be the wrong course of action. 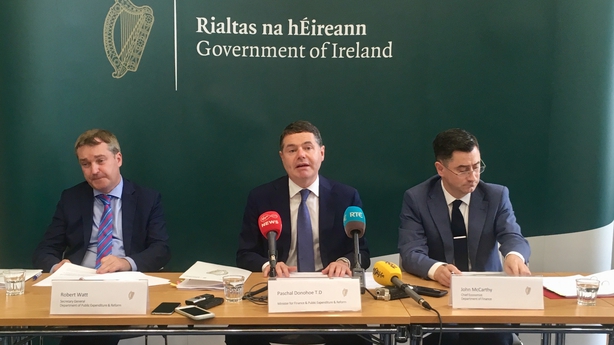 Paschal Donohoe says he has €700m of unallocated money for the upcoming Budget.

What he decides to do with that money will depend on a no-deal Brexit or a smooth agreed withdrawal of the UK from the European Union.

If it's disorderly with a severe impact, he will use the unallocated €700m to support people who have lost jobs as a result of the economic turmoil.

He would also lower tax collections, which would act as an economic cushion. It means Ireland will run a deficit at a time when it has borrowings of about €200bn.

As politicians have learned in the recent past, getting into more debt in a slowdown is a tricky business.

Paschal Donohoe is leaving himself room for manoeuvre. But the opposition suggests he should go much further and put more funds aside for the sectors of the economy affected by Brexit.

The Minister is like a surgeon in advance of a major operation. He is being reassuring before the trolley rolls into the theatre.

The problem is the patient has no idea what life will be like when the anaesthetic wears off.