The European Union will not renegotiate the Northern Ireland Protocol agreement, European Commission Vice-President Maros Šefčovič has said, in response to Britain's decision to override some of the post-Brexit trade rules for the region.

"Renegotiating the protocol is unrealistic ... Any renegotiation would simply bring further legal uncertainty for people and businesses in Northern Ireland. For these reasons, the European Union will not renegotiate the protocol," Mr Šefčovič said in a statement.

"It is with significant concern that we take note of today's decision by the UK government to table legislation disapplying core elements of the Protocol. Unilateral action is damaging to mutual trust. The Commission will now assess the UK draft legislation.

"Our aim will always be to secure the implementation of the Protocol. Our reaction to unilateral action by the UK will reflect that aim and will be proportionate."

Tensions have been simmering for months after Britain accused the EU of taking a heavy-handed approach to the movement of goods between Britain and Northern Ireland - checks needed to keep an open border on the island of Ireland.

In March 2021, the European Commission took legal action against the UK for unilaterally extending grace periods covering the use of export health certificates for shipments of agrifood products from Britain to Northern Ireland.

That legal action was frozen last summer in order to provide space for technical talks with the UK on easing the burden of the protocol.

In his statement this evening, Mr Šefčovič said: "The Commission will consider continuing the infringement procedure launched against the UK government in March 2021.

"The Commission will also consider launching new infringement procedures that protect the EU Single Market from the risks that the violation of the Protocol creates for EU businesses and for the health and safety of EU citizens." 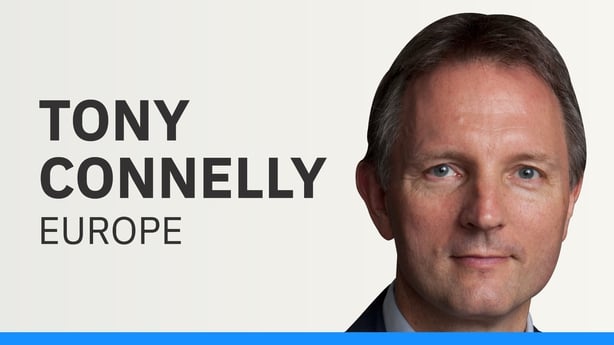 The European Union has been expecting the bill for some time and has been careful to calibrate its response. The European Commission was due to publish a detailed statement the moment the bill and an explanatory memorandum appeared.

That statement was held up by a delay in the UK placing the bill before the House of Commons. An expected speech by Foreign Secretary Liz Truss was cancelled.

However, a draft version of the European Commission's statement, seen by RTÉ News, made it clear that the EU would "consider" unfreezing legal action against the UK this week, with the possibility of new infringement proceedings.

Such a move can only be adopted by the College of 27 Commissioners, and they could take that decision when they have their weekly meeting this Wednesday, according to diplomats.

That legal action was suspended in July of last year when the UK published its Command Paper on changing the protocol. At the time the commission said it was freezing the action in order to create a new climate for technical talks.

The draft also made it clear that the EU would not renegotiate the protocol. This was predicted and has been made clear by member states for months.

In private, national capitals - particularly Paris and Berlin - have been furious with the UK's approach to an international treaty.

Diplomats have said that the UK gambit, which on some level seemed to be to provoke national capitals into giving their chief negotiator Maroš Šefčovič a new mandate to fundamentally change the protocol, was a non-starter.

Šefčovič has not been inclined to ask for a new mandate, and member states have said that if he were to, he would not be given one.

That's because capitals believe the EU's proposals from last October were a generous offer and that because the UK had not properly "engaged" in the proposals, their potential has not been fully explored.

Several sources have said the EU had been keeping further concessions in reserve if the negotiations, which have been stalled since early February, resumed.

But those concessions would be contingent on the UK showing a willingness to properly implement those aspects of the protocol which the EU has deemed critical: the completion of Border Control Posts (BCPs), which would carry out checks and controls on agrifood products, and on getting proper, real time access to UK databases on what was coming into Northern Ireland.

The UK has said bluntly that it has been forced to legislate unilaterally because the EU would not change Šefčovič's mandate.

The view in Brussels has been that London keeps moving the goalposts, and in the end, the bill that has emerged is an entirely new protocol, created in the UK's image (ie, the removal of the European Court of Justice as well as wholesale changes to the way the protocol handles VAT and competition rules).

That this maximalist approach has been authored by hardline Brexiteers such as David Frost, the former UK negotiator, and encouraged by the European Research Group (ERG), has further infuriated member states.

That makes it even less likely that they will come to the table in a generous mood - if indeed the table has not been overturned by the bill.

In other words, it seems highly unlikely that the technical talks which had run from last August until 3 February, and which were based on the EU's four October papers (which were in turn a response to the UK’s Command Paper), will resume in any meaningful way.

There had been faint hopes that a space for negotiation between the publication of the bill and the summer recess might open up in which a landing zone might be found on reducing the number and nature of customs and regulatory checks.

But so thoroughly does the bill overturn the protocol, that both sides may well be simply too far apart.

This means we are in for a prolonged stand off. The EU cannot be seen to give in to blackmail, and having rolled the dice and breached international law (in the opinion of almost everyone except the UK government), Boris Johnson is not going to suddenly withdraw the bill.

There are dark suspicions that this has been the UK's intention all along. With both Boris Johnson and Foreign Secretary Liz Truss so in thrall to the ERG, why would they go back to a messy compromise based on the October proposals that would leave the protocol pretty much intact, but with mitigations?

That means Dublin and Brussels will remain relative bystanders as they watch to see if the bill makes it through the Commons and the Lords and finally receive Royal Assent.

The commission is expected to publish a model of how its flexibilities on the protocol would work in more detail, and this will form part of what it regards as ongoing outreach to stakeholders and citizens in Northern Ireland.

In other words, Brussels will maintain a carrot and stick approach: the reopening of legal proceedings, with new legal actions added, the threat of trade measures, but at the same time a promise to show how its October papers could provide the kinds of mitigations that ordinary people and businesses could live with.

By appealing directly to Northern stakeholders, the commission will hope to short-circuit London's hard Brexit demands over stripping out the ECJ, VAT and competition rules.

It will hope that a growing chorus of international disapproval, as well as backbench unease, will coax London back to the table.

It seems from this angle to be a long shot. But UK politics are now entering another highly unpredictable phase. 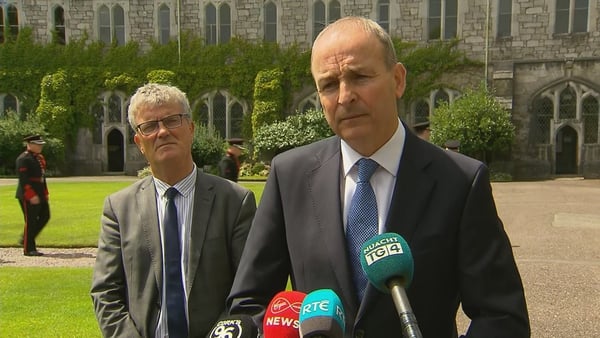