Joe Biden's big selling point when he became president - at least outside the United States - was his expertise in foreign policy.

For half a century, he had been immersed in US foreign policy, rising up the political side of US diplomacy to head the powerful Senate Foreign relations committee.

He paid particular attention to Europe and the trans-Atlantic relationship.

Like his republican counterpart, the late Senator John McCain, Biden was a frequent visitor to European security and foreign policy events, like the Munich Security Conference. He knew the issues, he knew the key players - meeting most of them over many decades.

Now, during the biggest land war in Europe since 1945, with the old Cold War enemy Russia invading Ukraine and shaking the post-1990 European order, all that knowledge, all that expertise ought to be paying off for the man who is now US President. In the closed door world of international diplomacy, it probably is.

But among US voters, it isn’t. Just over four in ten Americans now approve of the way Joe Biden's presidency is going, according to the latest in a series of polls by NBC television.

80% fear it will lead to even higher petrol prices and a similar number are worried the war might involve the use of nuclear weapons.

71% of those polled said the country was on the wrong track, compared with just 22% who believe it is heading in the right direction.

The only issue on which his ratings have gone up is the Covid-19 pandemic, where 51% approve of the president's actions - but this is a reversal of a steady decline in approval over the past year (he started with 69% approval on this issue, fell steadily to 44% and has now gone up as the mask mandate and some other measures eased just before the sample was taken).

The economy is the key issue, with the inflation surge and cost of living issues topping the list of concerns for Americans.The bellwether for the US economy is the price of petrol.

At the equivalent of €1.12 a litre, the US average petrol price would delight Europeans. According to the website globalpetrolprices.com, the US petrol price (in dollars per litre) of $1.22 is just below that of Zambia, Rwanda and El Salvador. It is a long way behind the $2.02 price in Ireland, $2.13 in the UK, $2.52 in the Netherlands and $2.88 per litre in chart topper Hong Kong.

Yet it is the big talking point here (there are big regional variations too - California prices are some 50% higher than the national average).

Americans drive a lot, and the price of petrol is a visible and painful sign of their shrinking spending power.

Combined with higher car prices, a shortage of new cars pushing prices for new and second hand cars higher, and a shortage of car parts making repairs - and insurance - rapidly increase in cost, it becomes clear just how this car dependent nation is fixated on rising fuel and transport costs, which in turn feed into the cost of everything else.

After decades of low inflation, the old demon is back - along with the pandemic and the war in Ukraine, combining to make life hell for politicians. The buck stops with the president, and Americans are telling pollsters they blame Joe Biden for their woes.

There are political consequences for poor poll numbers like these, and those consequences will manifest in November's midterm congressional elections.

The NBC poll asked voters which party they would prefer to see in control of the US Congress after November’s midterm elections.

The answer was 46% Republican, 44% Democrat.That two percentage point lead for the Republicans is within the poll's margin of error - but it is still the first time the Republicans have had such a lead in this tracking poll series since 2014.

Of course the NBC poll is just one poll. And its tracking series is just one series. The fivethirtyeight.com, a website for statistics nerds, had developed a poll of polls, based on a weighting system, to accommodate all national polling data. But the news is still not good for President Biden.

Tracking polling date from day four of the Biden presidency right up to now produces a graph that looks like a big, long X, with the president's approval rating sliding down, and his disapproval measure climbing up. He started off with an approval from 53% of voters, but now 53% disapprove of President Biden.

If a presidency can be reduced to a single number, then the approval rating is that number.

The crossing point came in mid-august last year, at the height of the chaotic withdrawal from Afghanistan. 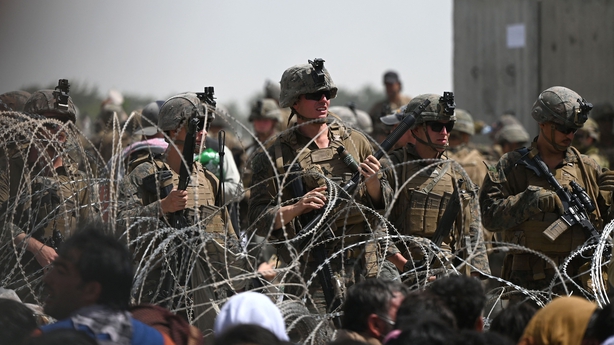 And he has not recovered.

He has not gained any bounce - at least so far - from the war in Ukraine. Perhaps because the US is not directly involved in the fighting (something the president is adamant he will avoid), there is little sense of rallying to the President in time of war.

Even his communication strategy of calling the petrol price rises "Putin’s price hike" doesn't seem to be cutting through. Instead it is the president who is blamed by most Americans for the price of petrol (in the NBC poll), with Putin being blamed by just 6% of those questioned about the cause of rising prices (38% blamed President Biden and his policies, 23% corporate price rises, and 28% the pandemic). 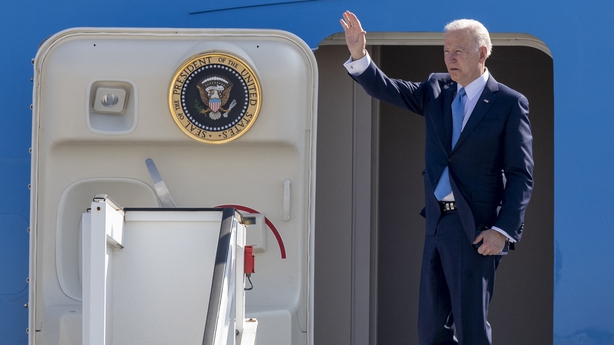 All presidents lose approval ratings as their term goes on, but the higher the starting point, the less damaging that loss of approval becomes in terms of re-election, and the ability to get things done politically.

Barack Obama had a starting approval rating more than twice as high as Joe Biden (+39.3%).

George W Bush had a starting approval rating of +32%.

Bill Clinton had a starting rating of +36.3%. They all got re-elected. But they all enjoyed much lower starting disapproval ratings than Joe Biden.The starting point in the polling journey is important for the political milestones that follow.

Right now, inflation is the key issue for far more voters than the Ukraine conflict. Asked to chose between working to end the war in Ukraine or tackling inflation/economy, 68% picked inflation, to 29% Ukraine.

Perhaps things will change in ways that favour the Biden Presidency - perhaps the war in Ukraine will turn in such a way that it gives the president a foreign policy bounce. Perhaps that will lead to an easing of petrol prices.

Perhaps the supply chain issues besetting everything from food to microchips to automobiles will iron out and the price pressure will ease. Perhaps all of that will happen before the midterm elections in November.

But it’s a pretty unlikely looking set of circumstances.