Texans are tough. Texans are hard. Texans stand their ground. We all know the stereotypes.

But what does a Texan running scared look like?

He looks like the Governor, Greg Abbott, did at his news conference on Friday night.

There are two images to look at that tell the tale.

First is the scene when the Governor gave his news conference on Wednesday - the one with the tale of the hero-cop confronting the gunman outside the school.

There is the Governor, centre stage, in a dark shirt that looked a bit like a uniform - it had a badge on the left side of his chest - the word "Governor" on the right side, like his rank badge. Around him was a group of men - all men - many in uniform or something that looked like a uniform. A number in cowboy hats. It was yet another scene from the mythology of the Texas Rangers.

Compare that with the picture of the Governor's press conference on Friday night.

There he sat, at the same table, but dressed in civilian clothes, a sports jacket and an open-necked shirt - humble.

Beside him one man, also in civilian clothes. And four women, one seated to his right, the others standing behind him. This is the semiotics of furious back-pedalling. 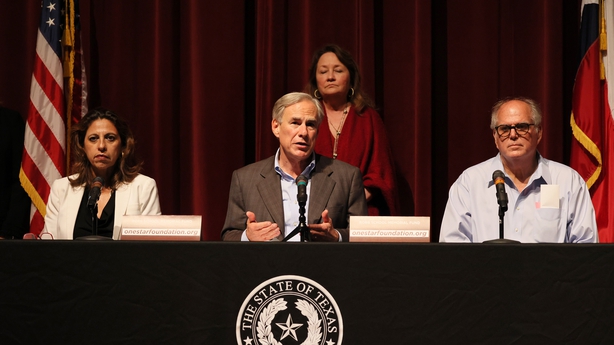 It never smelled right from the start. The account given - largely by the Governor - of the gunman being confronted by a school police officer, then two other officers who received wounds, then a group of officers bursting into the room where the gunman was and shooting him to end the horror, just didn’t cohere.

There was no timeline, and the account given raised more questions than it answered.

Yes, it was very early in the investigation of a deeply traumatic event.No, the police did not have - could not have gathered - a comprehensive, definitive account of everything that occurred.

But 24 hours after the attack, some basic facts should have been clear. One such fact - either there was a school police officer who confronted the gunman, or there was not.

The governor told us there was.

In fact, there was not. He gave the impression it all happened rather quickly. In fact, the incident played out over an hour and twenty minutes.

Maybe the nose let him down. Or maybe he went against his gut instincts

I’ve been a reporter for a long time. Over the decades I have noticed that the really good politicians have a kind of superpower, an ability to sense political danger, and swerve out of its way.

It’s the nose - they can smell when something isn’t right, when someone is feeding them a line, or attempting to. It's not about facts, or logic, or knowing stuff- it's about reading people and situations in an instant and making a judgement call - call it gut instinct.

For a top-of-the-game politician, the gut instinct will trigger a muscle-memory-type evasive action.

Like when you are on a stage surrounded by cops, invite the cops to tell their own story: that way if they are retailing fiction, the author will be duly recognised.

But if you are a civilian dressed in a quasi-uniform, with a star shaped badge and a rank indicator on it, you have kind of joined the team, rather than acted as a separate, superior authority - the one that the cops are supposed to be accountable to.

It's not like he lacks experience in these situations. Since becoming Governor in 2014 he has overseen the response to mass shooting incidents in which more than 90 people have been killed, including attacks on a church in Sutherland Springs, a high school in Santa Fe, a supermarket in El Paso, and shooting sprees in the streets of Dallas, Odessa and Midland.

Maybe the nose let him down. Or maybe he went against his gut instincts. Or maybe his politics acted like Kryptonite on his political superpower.

The whole tenor of Wednesday’s news conference had the feel of something that had been made to fit into a wider political context - that guns and gun laws were not a fundamental part of the problem.

In this world view, or ideology, or speaking points -widely and rapidly shared by politicians, commentators and certain media outlets - the problem was the mental health of young men, the internet, the breakdown of society, churches, father figures, work, community, the lack of Fort Knox-like impregnable structures at every school in the country, the lack of a Chinese-style surveillance society in which every TikTok, Instagram and Messenger post by everyone is overseen by some kind of Big Brother security apparatus that dispatches a SWAT team to take down the shooter before the shooter has a chance to become a shooter.

Former US President Donald Trump was on-message when he addressed the National Rifle Association convention in Houston at the same time Governor Abbott was telling us how "livid" he was that he had been told things that were inaccurate.

Mr Trump said: "What we need now is a top to bottom security overhaul at schools all across our country. Every building should have a single point of entry. There should be strong exterior fencing, metal detectors and the use of new technology to make sure that no unauthorised individual can ever enter the school with a weapon.

"No one should ever be able to get anywhere near a classroom until they have been checked, scanned, screened and fully approved.

"In addition, classroom doors should be hardened to make them lockable from the inside and close to intruders from the outside. And above all, from this day forward, every school in America should have a police officer or an armed resource officer on duty at all times.

"Moreover, at every police department in America, we need a rigorous training on active shooter protocols to immediately locate and eliminate the target. And we need to expand funding recruiting and training for police departments nationwide.

"This is not a matter of money. This is a matter of will. If the United States has $40bn to send to Ukraine we should be able to do whatever it takes to keep our children safe and. We spent trillions in Iraq, trillions in Afghanistan, we got nothing. Before we nation build the rest of the world, we should be building safe schools for our own children in our own nation.

But again, there was no mention in Mr Trump’s speech of any possible role that restricting the sale of guns could have in reducing mass shooting incidents. He and Governor Abbott believe that that amounts to removing people’s constitutional rights.

Everything else - no matter how improbable - is to blame, but not lax gun laws. How could it be otherwise?

The Governor signed into law last year a "right to carry" bill that makes Texas among the least restrictive places in the United States when it comes to carrying a concealed weapon - no licence or training needed.

In 2015 he signed a law to allow the concealed carrying of handguns on college campuses.

So it's logical that as most people are "good guys", the more armed good guys there are, the less shooting there will be. So, more guns are the answer, not fewer guns.

That’s why Donald Trump received a rousing round of applause at the NRA for calling for "highly trained teachers" to be allowed to "conceal-carry" weapons in the classroom.

In the space of ten days, this country has seen two incidents of double-digit mass murders perpetrated by 18-year-old males with assault rifles.

Here in Texas, you have to be 21 to buy a lottery ticket, cigarettes of vape fluid, hire a car, or buy a beer or other type of alcohol.

These are time-limited restrictions deemed to be for the good of individuals and wider society. But it’s not OK, according to the NRA and its supporters, to apply an over 21s restriction to the purchase of assault rifles. It is perfectly OK for someone to turn 18 and go and buy a military grade semi-automatic rifle and as much ammunition as they can carry.

Federal Law imposes an age limit of 21 for the purchase of handguns. But this does not apply to "long weapons", like the AR-15 type of military rifle. Which is one of the reasons this type of weapon crops up so frequently in massacres carried out by teenagers - it's legal to buy.

Six states have banned the sale of rifles to under 21’s - Florida, Washington, Vermont, California, Illinois and Hawaii. The NRA is trying to have the courts overturn the restriction in Florida on second amendment grounds. In the other 44, you have to be 21 to buy a pistol, but 18 to buy an assault rifle.

Opponents of tighter gun laws say there is a mental health crisis driving - if not causing - America's epidemic of school massacres.

There may be more truth to this statement than they realise.