Residents in the Lough Funshinagh area of Co Roscommon have said heavy rain overnight is now threatening to flood a number of houses in the area.

Roscommon County Council is putting measures in place to try to raise local roads and pump out floodwater in the Ballagh area.

30 mm of rain in the west and midlands is wreaking flooding havoc again for families ...we have the latest from Rahara in Roscommon on 6.1 @rtenews pic.twitter.com/PqYv54HjX9

Overnight, 20-22mm of rain led to the deterioration of conditions on the lake, which is a natural turlough nearby.

The council was called to the scene of flooding at the Taughnara junction on the Ballinlough to Cloonfower crossroads this afternoon.

It is understood personnel from the council are likely to erect signage to divert traffic away from the affected area.

The flooding concerns were raised by Councillor Paschal Fitzmaurice who has made representations to the local authority to alleviate the problem at the site. 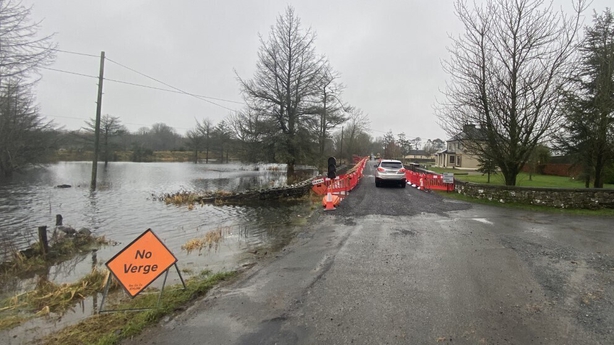 Residents say that Lough Funshinagh, which normally disappears, has not reduced in levels for a number of years now and is a constant threat to homes in the area.

Over the last ten days residents of one house have already been evacuated and another home is under threat today.

Locals say the failure to restore this turlough to its natural levels, through a simple overflow pipe into the River Shannon, is now hitting the area badly and is not only affecting residents and local people but wiping out wildlife and the environment.