The Garda Commissioner has paid tribute to members of the force who have lost their lives when putting themselves at extraordinary risk during the exercise of their duty.

Drew Harris was speaking at a commemoration in Co Roscommon for the late Detective Garda John Morley and Garda Henry Byrne who were shot dead 40 years ago today.

They died at Shannon's Cross outside Loughglynn at around 2.20pm on 7 July 1980 after responding to a call about a bank robbery in nearby Ballaghaderreen.

The families of the two gardaí were among a group of people who attended this afternoon's event at the location where they died.

Church bells also rung out in Loughglynn, Fairymount, Ballaghaderreen and Castlerea at 2.20pm to mark the anniversary.

Commissioner Harris said that keeping people safe is what gardaí do every day of the week and there are rare times when they put themselves at risk protecting their community. 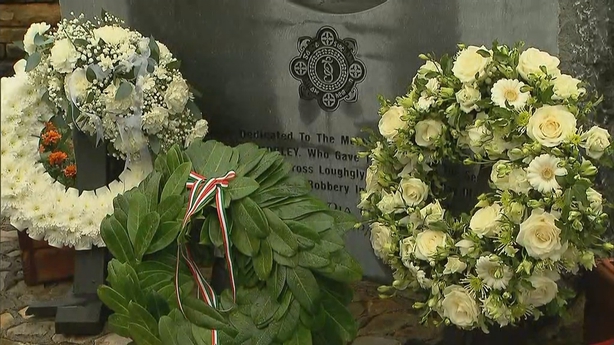 Detective Garda Morley and Garda Byrne were shot dead as raiders tried to escape with IRL£35,000 in cash from the Bank of Ireland in Ballaghaderreen.

They gave pursuit as the raiders fled the area.

A shoot-out followed near Loughglynn and the two gardaí were killed.

Two men later served sentences for the murders. A third had his conviction quashed.

In June 2017, then justice minister Charlie Flanagan unveiled a stone memorial at Shannon's Cross in Loughglynn where the shooting took place.

After today's ceremony, the Morley and Byrne families paid tribute to the late Detective Garda Colm Horkan, who was shot dead while on duty in nearby Castlerea last month.

Det Gda Horkan's father Marty, who attended the ceremony with members of his family, said gardaí never knew what was ahead of them when they put on the uniform.

Man charged over possession of cocaine