Minister for Agriculture Michael Creed faced an angry response from farmers at the Charleville Agricultural Show in Co Cork today, following the completion of trade negotiations yesterday that paved the way for a significant increase in the importation of cheaper beef from South America into the lucrative EU consumer market.

The minister said that he too is deeply disappointed with the deal and its impact on Irish beef farmers, the beef sector and the rural economy.

Farmer Kathleen O'Keefe from Knocklong in Co Limerick tackled the minister on the issue, explaining that she had visited Brazil and saw for herself the lack of tagging and traceability on beef farms there.

She told the minister she was extremely annoyed, and that he was a brave man to tour the agricultural show the day after the deal was announced.

The minister was sympathetic about her sense of annoyance, saying that 100,000 tonnes of beef from South America would now be coming our way, even though it could take a number of years before it is fully implemented.

He said that was a lot of extra beef at a time when the beef market in Europe is already oversupplied, and when 300,000 tonnes of Irish beef - which is currently exported to the United Kingdom - has an uncertain future.

MEP Sean Kelly said that it looked like the outgoing EU Commission wanted to leave a legacy, but that the new elected European Parliament will have to take a look at the deal.

He said his message to Irish farmers was that it was not a done deal, and that now is the time for them to ensure that their voices are heard.

Newly elected MEP Billy Kelleher said that the Government has a role to play now. The deal, he said, will have catastrophic consequences for farmers, and that Fianna Fáil has already requested an emergency debate in the Dáil about the impact of the Mercosur trade deal next week.

The president of the ICMSA, representing dairy farmers, said he is extremely concerned about the consequences, adding that it incorporated a degree of betrayal over climate obligations and hypocritical food standards.

Earlier, the EU Agriculture Commissioner Phil Hogan was in a defensive mood when speaking about the trade agreement.

He said he can understand the worry of Irish farmers in relation to the deal, which the IFA calculates could ultimately cost the beef sector over half a billion euro in lost revenue. 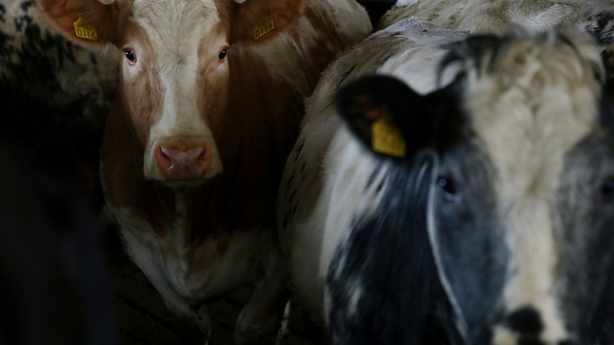 But the commissioner said Europe was on the defensive on beef, poultry, sugar and ethanol, with the Mercosur bloc insisting on greater market access for those products in Europe.

Mr Hogan said he spent months trying to limit the damage, but that in the end Europe had to concede some ground on beef imports in order to get €6 billion of tariffs and other trade-related savings delivered on the industrial side.

He insisted however that Europe had gained from the deal when it came to dairy, with exports of an additional 30,000 tonnes of cheese and 10,000 tonnes of skimmed milk powder and baby formula to South America provided for under the deal.

He also said that the deal included safeguards in relation to food safety and environmental standards, and that it ties Brazil into a commitment not to pull out of the Paris climate change agreement.

In addition, Mr Hogan said that the trade agreement provides for €1bn in financial and common market supports in the event of severe market disturbance when the deal comes into effect.

However, the president of the Irish Farmers’ Association, Joe Healy, insisted this morning that the trade agreement was reckless and wrong.

The president of the Irish Cattle and Sheep Farmers’ Association, Edmund Phelan, labelled the agreement an "absolute disgrace" and said it "beggars belief" to think that millions of acres of rainforest is going to be chopped down to facilitate beef expansion while sustainable fully traceable beef in Europe is put to the sword.