Academy Award winner Spike Lee issued a political rallying cry onstage at Sunday's Oscars, telling the audience in Hollywood's Dolby Theatre - and at home - to "make the moral choice between love versus hate".

Lee - an honorary winner in the past - won his first competitive Oscar on Sunday night with the Academy Award for Best Adapted Screenplay for BlacKkKlansman, based on the true story of an African-American police officer who infiltrated the Ku Klux Klan.

When Lee ran onstage to accept the Oscar he jumped into the arms of friend and award presenter Samuel L Jackson.

With speeches limited to 90 seconds, Lee warned Oscar organisers in no uncertain times not to turn the clock on.

Having told the audience that we "all connect with the ancestors who have love, wisdom and humanity", Lee turned his attention to the future.

"The 2020 presidential election is around the corner," he continued. "Let's all mobilise, let's all be on the right side of history, make the moral choice between love versus hate.

"Let's do the right thing - you know I had to get that in here," he said, referring to his 1989 film of the same name. In one of the great Oscar snubs, Do The Right Thing was neither nominated for Best Picture nor Best Director.

Spike Lee calls on America to mobilize for the 2020 election: "Make the moral choice between love versus hate. Let’s do the right thing!" https://t.co/WFxDborr1n #oscars pic.twitter.com/TntC0f3kYm

Lee took issue with the controversial 1960s-set road movie Green Book winning Best Picture. The Viggo Mortensen and Mahershala Ali-starring film has divided audiences: loved by many for its warmth, criticised by others for being too simplistic and for what they see as a 'white saviour' narrative.

When Green Book was announced as the winner, Lee was seen to leave his seat, which many interpreted as his way of showing his anger at the decision.

Backstage he said he thought he was courtside at a basketball game in Madison Square Garden and that the referee had made a "bad call".

Costume designer @iamRuthECarter on #BlackPanther: "Marvel may have created the first black superhero, but through costume design, we turned him into an African king." https://t.co/I1ZkzK7cSQ #oscars pic.twitter.com/C7ViQBdVVx

Backstage, Ruth Carter said: "Finally the door is wide open. I hope through my example this means that there is hope and other people can come on in and win an Oscar just like I did."

Domee Shi, the director of the Oscar-winning animated short Bao, was the first woman in Pixar's history to direct a short film at the studio.

"To all the nerdy girls who hide behind sketch books don't be afraid to tell your stories to the world," she said when accepting her award.

Check out the best moments at this year's Oscars here, and take a look at our red carpet gallery here. 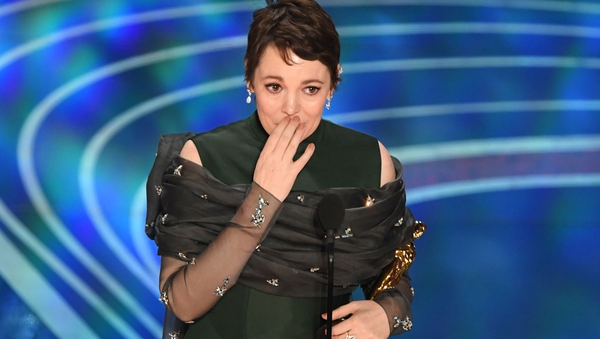