Upon hearing that the film had been named Best Film, McDonagh said he felt "overwhelmed"

During his acceptance speech for Best Original Screenplay, the London-Irish filmmaker said, "I would like to thank my muse, Sam Rockwell, for his brilliance - I love you, and let's do it again Sam."

He then paid tribute to the film's leading star Frances McDormand, who was in the audience.

"I'd like to thank Frances McDormand for a performance that was as unapologetic as it was fearsome - I love you, and let's do it again, too."

McDormand was also a winner on the night, taking home the BAFTA for Best Lead Actress. Saoirse Ronan had also been nominated in that category for her Golden Globe-winning turn in Lady Bird but lost out to the Three Billboards star.

Sam Rockwell and Woody Harrelson were both nominated in the Best Supporting Actor category for their performances in the film, with Rockwell taking the award on the night.

Rockwell paid tribute to the late Alan Rickman as he accepted his award, and quoted a line he accredited to the late actor, saying: "There are no great actors, only great roles."

He said that he was "humbled" to fend off competition from the others in the category, and that "this has been a real magical journey for me".

As he signed off, Rockwell said: "I'm very lucky to be here tonight, thank you to the British Academy, this is for my pal Alan Rickman, I'll see you at the bar!"

Stars and activists support Time's Up at BAFTAs

In the Best Supporting Actress category, I, Tonya star Allison Janney danced her way to the stage to collect her award and joked that she "could simply murder a glass of water right now".

"You've given me a gift I will never forget, my friend, I love you, cheers," she said to Rogers.

Oscar nominee Daniel Kaluuya (Get Out), who can currently be seen in Black Panther, won the EE Rising Star award.

Kaluuya's performance in Get Out also saw him nominated for Best Actor, with the award going to Darkest Hour star Gary Oldman.

Red Carpet Fashion at the BAFTAs

Accepting his award, Oldman thanked his three sons and his "beautiful wife" for their support.

He also thanked Sir Winston Churchill who, he said, "held the line for honour, for integrity and freedom, for his nation".

"I thank you Sir Winston, I thank you and the Churchill family and, of course once again, BAFTA, I'm so grateful for this incredible honour," he said.

Guillermo del Toro's The Shape of Water was another big winner on the night, with the filmmaker being named Best Director.

The film also took home the awards for Original Music and Production Design.

See the BAFTA red carpet action as it happened!

The BAFTA Winners in Full:

Adapted Screenplay - Call Me by Your Name, James Ivory

Outstanding Debut by a British Writer, Director or Producer  - I Am Not a Witch, Rungano Nyoni (Writer/Director), Emily Morgan (Producer)

Film Not in the English Language - The Handmaiden

Documentary - I Am Not Your Negro

Original Music  - The Shape of Water

Production Design - The Shape of Water 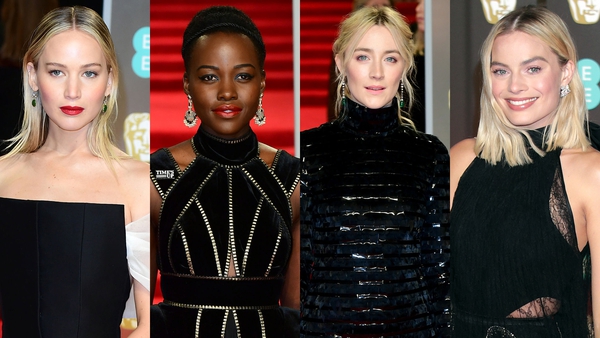 Stars and activists support Time's Up at BAFTAs