Widespread tributes were made to Nobel peace prize winner John Hume, on the announcement of his resignation as leader of the Social Democratic and Labour Party (SDLP), the party representing the nationalist community in Northern Ireland.

The 64-year-old Member of Parliament (MP), who has led the party since 1979, told a news conference at Stormont that he will resign from the position in November 2001. Citing ill health as the catalyst for his decision to step down as SDLP leader John Hume said,

In tribute to Mr Hume, those long divided by political ideology and interpretation were united in a common assessment of his contribution to a better, more peaceful island. These included Ulster Unionist Party leader David Trimble and Sinn Féin President Gerry Adams.

Deputy Leader of the SDLP Seamus Mallon and Taoiseach Bertie Ahern, both still involved in the peace process were also thankful for the remarkable leadership shown by John Hume.

John Hume came to public prominence during the civil rights marches in Derry in the late 1960s. He has been a member of the European Parliament since 1979 and the MP for Foyle since 1983. He was involved in the negotiations which led to the signing of the Good Friday agreement in April 1998.

An RTÉ News report broadcast on 17 September 2001. The reporter is Declan McBennett. 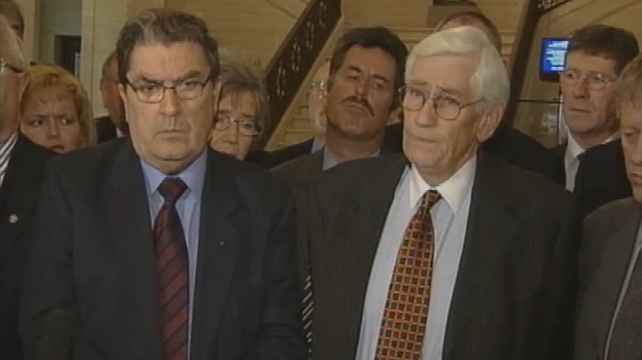