The Republic of Ireland Under-21 side will kick off a bumper weekend of international football when they play host to Israel Under-21s in Tallaght Stadium on Friday night, live on RTÉ2 and the RTÉ Player with kick-off at 7pm.

Jim Crawford will be hoping to create history as the manager of the first side ever at this age group to qualify for a major tournament, and this European Championship play-off first leg will be followed by the return in Tel Aviv next week.

Despite a hiccup away to Montenegro early on in the campaign, Ireland bounced back claiming six points over rivals for second position Sweden to finish behind Italy and earn a play-off spot.

They will be missing several key players due to injury such as Oisín McEntee, Mark McGuinness, Gavin Kilkenny, Joel Bagan amongst others.

However it is the senior squad which has hit the most notably as Gavin Bazunu, Nathan Collins, Troy Parrott, Jason Knight and Michael Obafemi are all still eligible.

Adam Idah is also still young enough but misses out on both squads with a knee problem. Fellow Norwich City player Andrew Omobamidele is also ruled out of both squads through injury.

Back-up keeper Luke McNicholas is the only current injury doubt in the squad.

Venezia's Aaron Connolly is in line to come straight back into the team for the first time at this level in three years since making the jump up to the senior team.

Crawford hinted that the Galwegian might play through the middle.

"I'd see him as a striker," said Crawford.

"What he offers with his pace, when he gets turned running at defenders from deeper areas he will cause problems but it's also safe in the knowledge that if you have to play him out wide then he can do a job out there."

As the team has suffered quite a few injuries, there will be players who have only played together in training.

Who plays at left-back will be an interesting call. Andy Lyons has excelled on the left for Shamrock Rovers, but that has been in the comfort of having three centre-halves alongside him.

Sean Roughan played at both centre-back and left-back for Drogheda United while on loan there but has played on the left since going back to parent club Lincoln City.

Ireland don't usually play with three centre-halves, although they did play three at the back away to Sweden in a 0-2 win.

The other position in the back four that is an contentious decision is who will partner Eiran Cashin at the heart of defence.

Jake O'Brien has played more frequently throughout the group stage in the absence of both McGuiness and McEntee but don't rule out St. Patricks Athletic captain Joe Redmond or Spanish-born Anselmo Garcia-McNulty either.

The most capped underage player in the nation's history Lee O'Connor should play at right-back but for his club Tranmere Rovers has played in the centre of midfield as a sitter.

The Waterford native could be pushed in there alongside captain Conor Coventry with perhaps Lyons or Festy Ebosele to deputise in the right-full spot.

Will Smallbone has been used in a more advanced role, or on the right by Crawford but could be asked to play in the double pivot alongside Coventry due to the absence of Luca Connell and Gavin Kilkenny.

That means Ross Tierney or Dawson Devoy could play off the striker, or Plymouth's Finn Azaz could come in to make his debut.

Ollie O'Neill scored the last gasp winner at home to Sweden could be an option out wide as Kerrigan is missing. Tyreik Wright is almost a lock-in at left wing.

Connolly could play out wide although Crawford sees him as a number nine. That has been a position which has seen several players get their chance in.

🇵🇹 0-1 🇮🇪
62' Should Aaron Connolly have had a penalty here?

Colm Whelan (currently injured), Mipo Odubeko, JJ Kayode and Evan Ferguson have all had their chance to lead the line, but it could be Connolly's X factor which could mean that he will get the nod.

Limerick-born Dara Costelloe, has featured in four games so far for Burnley this season and could be the hidden gem as the 19-year-old has yet to make an appearance at this level.

Israel finished second in a group behind Germany and ahead of Poland and Hungary. They, like Ireland, have had players called up from their under-21 side to their senior team, Celtic's Liel Abada being one of them.

Crawford has been doing his homework on a side that will be buoyed by an impressive under-19 side who brought England to extra-time in UEFA European Under-19 Championship final this year.

"[They have] pace up front, they've a good player [Osher] Davida who can play wide or like Aaron Connolly, can play up top. He’ll shoot from distance," said Crawford.

"Then you’ve got real technicians, [Oscar] Gloukh with Maccabi Tel-Aviv, played with the under-19s last year. He can carve open teams; he makes positive runs forward. He can score goals.

"[Mohammed] Kna'an is another technician. They’ve a lot of attacking players, defensively they are very aggressive and they are organised in terms of getting into that defensive block which they did against Germany and Poland.

"They defended deep against teams, they counter-attacked at pace, they get bodies in the box, so there was lots of threats we’ve worked on over the last couple of days.

"But also they have weaknesses that we have tapped into over the last couple of days that we addressed with the players and the players had a look as well."

While qualification would be historic, Crawford still sees this as another learning experience for this group of players.

"This is still developmental football," said manager Crawford. "It's under-21s, it's not the senior team. This is where players learn in pressure environments. You have to sample it."

Whereas some would see Connolly's recall as something that could upset the team dynamic, his skipper Coventry is happy to have him aboard.

"I think we know Aaron has a real quality, and ability that earned him senior caps and we're all delighted that he has come back and plays with us," said Coventry.

"I've seen him for many years and he's a real goal scorer and a real threat, we’re all delighted to have him here."

This group of players and coaches are known to break down small videos of opposition players for them to digest in the build-up to a game. As ever Coventry has his homework done.

"They're a good side, they're a really good side. They really want to play out from the back and into midfield and they’ve got some real technical players and some power as well.

"They’ve a well balanced team and a modern team as well, it’s good to see the way they play. It will be interesting to see it up close."

Just how close Ireland will get to Euros glory remains to be seen. No time like the present for this bunch. 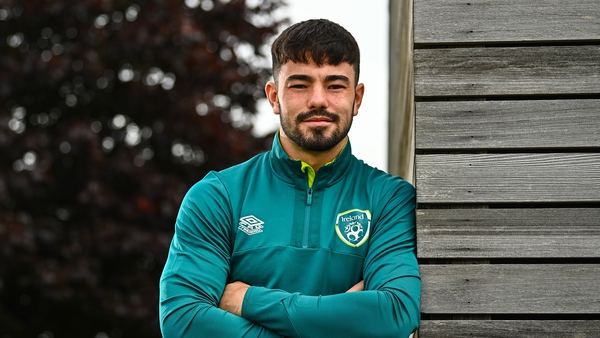