Celtic swatted Old Firm rivals Rangers away with ease in a thumping Premiership win at Parkhead.

In a barnstorming first-half Liel Abada fired the home side after eight minutes and the Israel winger grabbed a second just before the break after Portuguese winger Jota had scored with a delightful chip.

The Hoops had opened up a 3-0 interval gap in this fixture in February and the result would have stayed the same this time had substitute David Turnbull not accepted a gift from Jon McLaughlin to shoot past the Gers goalkeeper for number four, sealing another sore Old Firm defeat for the Ibrox outfit.

After the first Old Firm game of the season and the sixth league fixture, Ange Postecoglou's side have a five-point lead over their city rivals and even so early in the season look on course to retain the title.

However, it did not start well for the home side. Within seconds of the kick-off Hoops striker Kyogo Furuhashi was challenged by Gers midfielder John Lundstram which left him holding his arm, and he soon had to be replaced by Giorgos Giakoumakis.

There was always the threat that Celtic could blow Rangers away in a quick start and by half-time the visitors were in a state of disarray.

The first-half mauling started with a quick throw-in on the left by Jota which found Matt O’Riley and his cutback saw Abada screw his shot past McLaughlin – who got a hand to the ball but could not keep it out.

A Ryan Kent challenge on Abada in the Rangers box brought shouts of a penalty by Hoops fans which were ignored by referee Nick Walsh, before Giakoumakis missed a great chance when he headed an O’Riley cross past the far post.

The visitors were again made to pay for switching off when quick-thinking O’Riley sent Jota scampering into the box and his deft chip over McLaughlin made it 2-0, to the delight of the Celtic fans.

Colak headed a James Tavernier corner over the bar but Giovanni van Bronckhorst’s team soon found themselves further behind.

McLaughlin did well to save a Jota cross but moments later Greg Taylor’s cross from the byline ended up at the feet of Abada, who slammed the ball low past the goalkeeper.

The 800 or so Rangers fans stuck in the corner were in fear of further damage after the break, during which Gers winger Scott Wright had replaced midfielder Glen Kamara.

The pace dipped a little and then on came more substitutes. Moritz Jenz replaced Celtic defender Carl Starfelt and for Rangers Scott Arfield and Alfredo Morelos came on for Malik Tillman and Colak.

Celtic had it all in hand. There were half-chances at both ends – Morelos missed two – but the match was played to the soundtrack of joyous Hoops fans, who welcomed on Turnbull, Daizen Maeda and Aaron Mooy in the 71st minute for O’Riley, Abada and Reo Hatate.

Ryan Jack and Fashion Sakala had just replaced Kent and Lundstram for Rangers when McLaughlin inexplicably passed a goal-kick to Turnbull, who gratefully slammed the ball straight back into the net.

Celtic will now prepare for their glamour Champions League opener against Real Madrid on Tuesday night on a real high.

Rangers’ opener in the competition takes place the following night in Amsterdam against Ajax and they have to somehow regroup after a damaging afternoon. 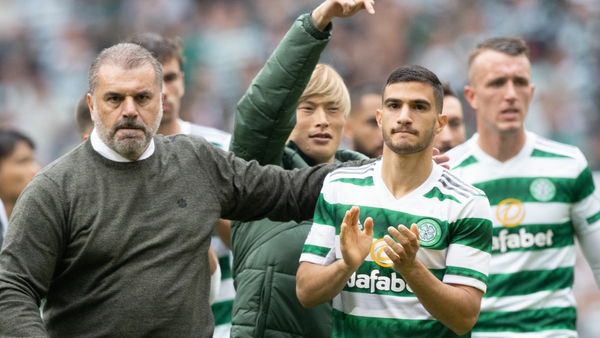