Ange Postecoglou said Celtic will be "hard to stop" in their quest to retain the Premiership title after they dismantled Rangers 4-0 at Parkhead.

Liel Abada scored a first-half double, one either side of a glorious Jota chip, to have the points secured by the interval.

Substitute David Turnbull accepted a gift from Jon McLaughlin to slam the ball past the Gers goalkeeper for number four to take Celtic five points clear of the Ibrox side at the top of the table, after just six fixtures.

The Hoops boss reiterated that the lead means little at this stage of the season but likes the way his side are playing – they have scored 17 goals in the last three games – and was encouraged by an "outstanding" performance.

"If we continue to play like that, absolutely, we’re going to be hard to stop. That’s our intent. We want to be better.

"We’ve started the season really strongly but we’ve got stronger each week and today was another strong performance.

"People have been dismissive because they thought the opposition we’ve had so far weren’t up to it.

"We were brilliant last week [in the 9-0 win at Dundee United] but people spoke about how poor Dundee United were.

"That suits us because it ignores our part in it. It will be the same today.

"We’ll just keep doing what we’re doing. Five points doesn’t get you anything right now – that was shown last year.

"But if we keep improving and playing like that? We’ll be hard to stop."

Postecoglou insists his side will not temper their attacking style when they take on Real Madrid in their glamour Champions League opener at Parkhead on Tuesday night, where Japan striker Kyogo Furuhashi, who went off within minutes with a shoulder injury, and defender Carl Starfelt, who picked up a knock, will hope to be fit.

He said: "Now we’ll get ready for Tuesday night. They’re an unbelievable team with outstanding pedigree.

"They’re champions of Europe but we’ll go out there and test ourselves.

"We don’t need motivation to raise our game. If you go to Ross County and score four, you need to be motivated or you slip up.

"To score nine last week and break a record, you need to be motivated. We were motivated today and we’ll be motivated on Tuesday night.

"We don’t need to change our approach to measure ourselves against the best.

"We’ll get really tested against Madrid but that’s what we want. You’ve got to respect the opposition. They’re a top team.

"But what we can control is what we bring. We’ll give our best, our way. That’s the key. This is who we are now as a team and we won’t change our approach.

"I’ve always felt the way to do that is by being yourself. We have to bring our own identity – that’s the approach we will take.

"But let’s go down swinging rather than deferring to someone because they’re a good team and changing our approach.

"Our supporters want us to take the game to Real Madrid and see where it takes us. Let’s have a crack anyway."

Giovanni van Bronckhorst was stunned after sluggish Rangers made another slow start at Celtic Park.

The Dutchman surveyed another dismal day in the east end of Glasgow and said: "Very disappointed with the result and the way we conceded the goals.

"It was a repeat of the game we played in February with a quickly-taken throw-in and free-kick. We knew they were some of their strengths and both times we weren't ready.

"You know when you concede early goals like that you make them stronger and make it more difficult for yourself. So disappointed with that and the result.

"You want to play a good game. You can always have goals against you but not in this manner. That's not the way we need to concede goals.

"It's difficult for me to say why it happened, but the most important thing is we weren't alert for the (first) two goals and the fourth as well.

"That's already three goals we could have avoided so disappointed with that and the result." 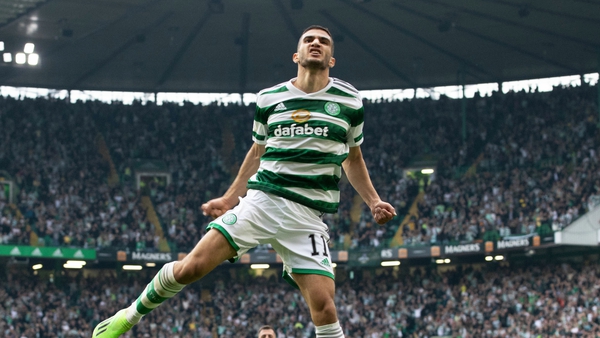