Robbie Henshaw scored the only try of the game as Ireland won a bruising Six Nations encounter against England at the Aviva Stadium.

Jonathan Sexton inspired the reigning champions' 10th successive victory by producing a masterclass in game management, while his half-back partner Conor Murray also flourished behind an Irish pack that played with furious intent throughout.

The Henshaw try and four penalties from Johnny Sexton kept Ireland ahead of an English side that registered two penalties and a drop goal from from George Ford.

The victory is Ireland’s tenth on the bounce and equals their longest-ever winning run, set back in 2002/2003.

Joe Schmidt’s team dominated for large swathes of the tie and had 59% of the possession with the pack offering a solid platform from the set-piece and breakdown.

While England managed seven clean breaks to Ireland’s one, they simply couldn’t find a way to pierce the Irish try line. It was Ireland who looked sharper, and when they got their big chance they took it. Conor Murray box-kicked to the corner for man-of-the-match Henshaw to chase, and the Connacht man out-jumped fullback Alex Goode to claim the ball and touch down in the right corner, which Sexton converted. That moment of brilliance proved the difference between the teams.

Ireland march on undefeated in this year’s championship; next up a very tough away assignment to Wales on 14 March.

Sexton kicks Ireland into the lead

First blood went to Ireland in the third minute as England infringed at the breakdown and Sexton stood up to nail the spot kick from inside the opposition half.

Ireland dominated the opening skirmishes, pushing the Red Rose back into their own 22 with a combination of Garryowens and piercing runs.

This should have been rewarded with a try as Ireland created a one-man overlap on the left wing; however, the chance went a begging as they instead went narrow with Rory Best being held up over the line. But from the same spell of attack England were again pinged on the deck and Sexton slotted another easy three points.

England finally settled as the clocked ticked towards 10 minutes. After multiple-phase retention in the Ireland half, Ford dropped into the pocket to calmly stroke over a drop-goal and halve the deficit.

They continued to grind away at Ireland and were rewarded with a penalty as Jordi Murphy failed to roll away in the tackle. However, from just inside the Ireland half, Ford pulled his effort on goal to the left of the sticks.

Sean O’Brien’s day came to an end soon after. He carried into contact and suffered a knock that caused him to wobble and collapse to the ground - not unlike a prize fighter floored by a left hook. He was clearly in no fit condition to continue and was called ashore, replaced by Tommy O’Donnell at open-side.

The loss of their most dynamic ball carrier didn’t halt Ireland’s momentum and they pushed England back into their own half, forcing the white shirts to play the ball on the deck. Sexton took his opportunity to slot his third penalty of the day.

At this stage, Ireland were well on top and playing a patient, calm retention game. England coughed up another penalty for offside, but Sexton failed to nail the kick, instead pulling the shot to the left – his first missed place kick of the championship.

Ireland continued to press and attempted to unlock the English midfield, but the wall of white stood firm until referee Craig Joubert blew it up for half-time.

The second half began the same as the first: Ireland on top. But England’s high defence and excellent line speed continued to repel Ireland and they were pushed back to the English 10m line.

Rob Kearney attempted a drop-goal from that distance with his team retreating, but the effort whistled left and wide. But moments later, almost from the exact same spot on the pitch, second row Dave Atwood was pinged for entering the side of the ruck, and a composed Sexton efficiently landed another three points from the tee.

The patience and probing continued from the home team and with it they got their just rewards. The men in green went through seven phases, pounding England in their own 22, before Murray box-kicked towards the right touchline where Henshaw beat Goode to the breaking ball. He displayed a dexterity akin to a young Brian O’Driscoll to touch down just inside the whitewash.

Sexton, from the tramlines, was supremely accurate with the conversion. And all of a sudden England were in huge trouble, trailing by 16 and needing to score next to stay in the tie.

They were given hope when Sexton was forced from the field with what appeared to be a hamstring injury. He was replaced by Ian Madigan. That momentum change allowed England strike next as they forced Ireland into giving a penalty away on the deck and Ford stroked over the place kick.

The away team’s hopes were further stoked when Ford added another penalty and Ireland were once more pressed back.

With Jared Payne forced from the field due to injury, Ireland reshuffled the backline, bringing Tommy Bowe into second centre and using replacement Felix Jones on the right wing. The home team were hugely under the cosh in the final ten as their habit of retreating into their shells in the final quarter surfaced again.

Despite that their defence was a thing of beauty and their structures were rock solid, repelling wave after wave of English attack.

The visiting team needed a touch of magic in midfield, but they couldn't find it, instead bulldozing forward in an all too predictable manner.

The fact that a last-minute try for winger Jack Nowell was disallowed for a forward pass in the build-up summed up their day: mountains of effort but crumbs of reward.

Ireland march on to Cardiff in two weeks.

Replacements: Tommy O’Donnell for Sean O’Brien on 24 mins, Ian Madigan for Sexton on 54 mins, Marty Moore for Ross on 57 mins, Cian Heay for McGrath on 58 mins, Iain Henderson for Toner on 65 mins, Felix Jones for Payne on 70 mins, Sean Cronin for Best on 73 mins.

Replacements: Tom Youngs for Hartley on 53 mins, Tom Croft for James Haskell on 61 mins, Mako Vunipola for Marler on 65 mins, Nick Easter for Atwood on 67 mins, Richard Wigglesworth for Youngs on 67 mins, Billy Twelvetrees for Joseph on 67 mins.

Man of the match: Robbie Henshaw 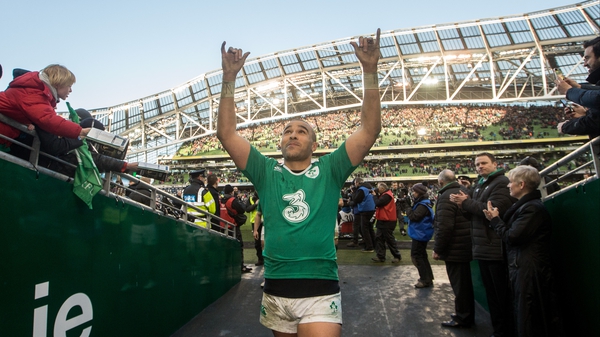