Head coach Joe Schmidt has admitted that winning their tenth Test match in a row was "a little bit special" after Ireland's 19-9 Six Nations victory over England at Aviva Stadium.

A converted Robbie Henshaw try and four Jonathan Sexton penalties were enough for Ireland to end to a run of four successive defeats to England.

England, who scored three penalties through George Ford, were outplayed in the air and at the breakdown and, to the surprise of many, out-scrummaged.

"To get those 10 wins, that’s a little bit special for us. It is something that has only been done once before by an Irish team."

Speaking to RTÉ Sport immediately after the match, Schmidt was quick to credit the players for their performance in a match that had plenty of endeavour and intensity but relatively few outstanding moments of skill.

"I am working away in a really player-driven environment. I think the players expressed themselves on the pitch today, not always in a spectacular fashion but certainly in a gritty, determined fashion."

"Being up at half-time, we knew after watching England play against Wales that it would be a very tough second half. I am incredibly proud of the way the players defended. England have some incredibly strong, elusive ball-carriers and they did open us up a few times but we managed to scramble back and keep our line intact."

Ireland's feat in equalling a previous record by getting their tenth win in a row, something last achieved under Eddie O’Sullivan from September 2002 to March 2003, was a particular source of pride.

"To get those 10 wins, that is a little bit special for us. It is something that has only been done once before by an Irish team."

"Also, we know we have to go away for the last two games of the Six Nations. England will be at home at Twickenham, that is a fortress for them. We knew we had to get the result today to stay in the race for the Six Nations."

Speaking within minutes of the final whistle, Schmidt also gave initial post-match updates on the injuries suffered by Sean O'Brien and Jonathan Sexton during the match.

O’Brien was forced off with just under half-an-hour on the clock with an apparent concussion after a collision which saw the flanker stumble and appear groggy in the immediate aftermath.

The 28-year-old will have to pass Head Injury Assessment (also known as Return To Play) protocols and could be a doubt for the remainder of the Championship.

"It think it might have been head to head. He is going to go through the HIA protocols. He is in there now (in the changing room), he is a little bit grumpy because he couldn’t see out the match and missed a fair bit of it but at the same time, he is feeling relatively well.”

Sexon left the pitch in the final quarter though in his case, the decision was taken due to concern about the potential for hamstring damage. Sexton’s final act of significance in the match was a touchline conversion which put Ireland three scores clear.

"We felt that the position it was in the game, that it was pretty good to get him off. He defintely felt it kicking that conversion, which he managed to strike superbly thankfully. As a result of that, we felt it was probably the safe thing to get him off the pitch at that stage."

Ireland move on to face Wales next and the result means that Warren Gatland’s men are very much back in the title race having beaten France on Saturday. Schmidt is not thinking that far ahead yet, though.

"To be honest, I’m not going to think about it for 24 hours. I’m going to let the lads enjoy it because I think they should be incredibly proud of what they did achieve today." 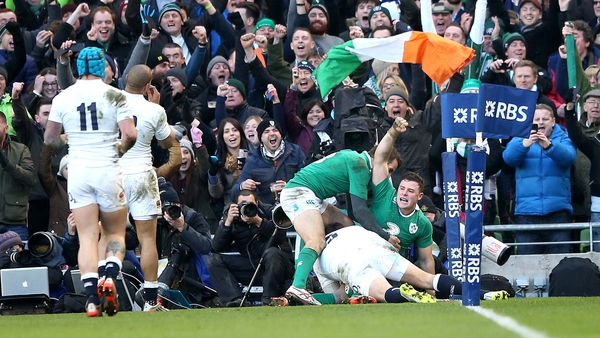