All-Ireland winning teams including the Galway hurlers and Dublin footballers are among the nominees for the RTÉ Sport Awards 2017 Team of the Year.

The Cork camogie team and the Dublin Ladies, who also won All-Ireland titles, are the other GAA representatives on the shortlist.

Cork City are also nominated for the award, along with World champion rowers Mark O'Donovan and Shane O'Driscoll.

Voting lines will open during the RTÉ Sport Awards on Saturday, beginning at 9.15pm on RTÉ One television.

Voting lines will close later on Saturday night at 10.40pm. Please do not vote outside of the advertised vote window as you will be charged for your vote, but your vote will not count.

Alternatively you can vote below.

Paudie Murray's charges collected a 27th senior All-Ireland title for the county earlier this year, after dethroning Kilkenny by just one point in Croke Park.

Cork won the final in dramatic circumstances, with Gemma O'Connor scoring a long-range equaliser at the end of normal time, with substitute Julia White securing the O'Duffy Cup with an injury-time point.

The Dublin footballers become the first team to win three consecutive All-Ireland titles since 1923 this year. A Dean Rock free proved to be the decisive score as they condemned Mayo to a ninth All-Ireland final defeat since last winning the Sam Maguire in 1951.

Dublin also collected their seventh Leinster title on the bounce earlier this season, with a comprehensive win against Kildare.

Galway bridged a 29-year gap to finally win the Liam McCarthy Cup. They were runners-up on six occasions since their previous win in 1988, defeating Waterford in the 2017 final on a scoreline of 0-26 2-17.

They also defeated Wexford in the Leinster final, to claim their first provincial title since 2012.

The Dublin Ladies footballers rallied from three successive All-Ireland final defeats to win the 2017 crown, and bring the Brendan Martin Cup back to the Liffey for the first time in seven years.

Captained by Sinéad Aherne, Dublin earned the title in front of a record-breaking crowd of 46,286.

The Skibbereen duo produced a sublime performance at the World Rowing Championship in Florida to win the gold medal in the lightweight men's pair category.

Earlier this year, they also emerged as the lighweight champions at the European Rowing Championships. 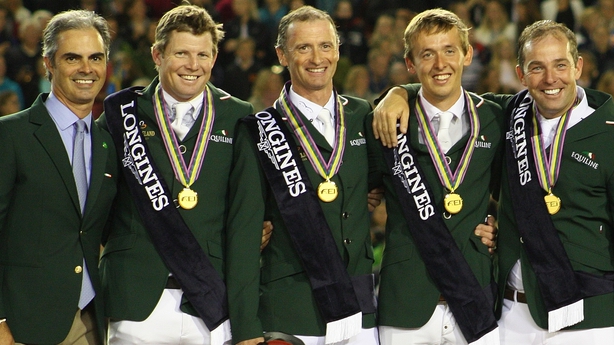 On the final day of the team event the pressure was on Lynch , Sweetnam and O'Connor as they all had to jump clear to win .

Ireland’s gold medal win comes 16 years after they were last crowned European champions in Arnhem in 2001. To round off a spectacular championships, Cian O'Connor added a individual bronze to Olympic medal from London .

Cork enjoyed an incredible season in 2017 in which they defended their Irish Daily Mail FAI Cup and won the SSE Airtricity League Premier Division title to secure an historic double for the club.

A 0-0 draw against Derry City gave John Caulfield's side the point they needed to earn the League title. They followed that up with a victory over Dundalk in the FAI Cup final. The decider went to penalties after finishing 1-1 after extra time.

Kieran Sadlier's spot kick determined the tie, and secured a first ever double for the club.

Vote lines will open during the RTÉ Sport Awards and will close at 10.45pm. Please tune in to each show for exact vote window close time. Please do not vote outside of the advertised vote windows as you will be charged for your vote, but your vote will not be counted.

RTÉ's decision in relation to the determination of the overall winner and the validity of the televote system is final and no correspondence will be entered into.

In the unlikely event of a tied result for Team of The Year, the winner will be chosen by the Group Head of RTÉ Sport.

Remember to ask permission from the bill payer before you vote.

The public will be invited to vote on the night either online at rte.ie/sport or by text.