Galway capped off the perfect season with a controlled display of power and accuracy to beat Waterford in the All-Ireland hurling final.

So long the nearly-men of hurling, with six All-Ireland final defeats since their previous win in 1988, the Tribesmen were composed as they went about their business.

Twenty-six points is a massive haul in the biggest game of the year and illustrates their abilities.

Since the day they hammered defending All-Ireland champions Tipperary in the League final back in May they were singled out as the favourites for September glory.

This isn’t a tag Galway have every worn with ease, but they embraced it in 2017 and proved that they are the best team in the country.

There were a few fretful moments against Waterford at Croke Park, but this one was in the bag ten minutes from time.

The Déise died with their boots on, but they hadn’t the craft or the scoring power to upset the odds. When they slipped three and four points behind late on they had to go looking for goals.

They got them in the first half, but, try as they might, they couldn’t raise the green flag .

A late scramble around the edge of the square in stoppage time was as close as they got, but in truth they wouldn’t have been value for a draw.

Both sides had heroes all over the pitch on a historic day at GAA Headquarters, which regularly shook with the noise of crowd, though Galway had more of them and they stood taller.

David Burke clipped two points in each half from the middle of the field, Gearóid McInerney handled outgoing Hurler of the Year Austin Gleeson with assurance, Joe Canning contributed scores nervelessly and earn the All-Ireland medal that his garlanded career had lacked up to this stage. 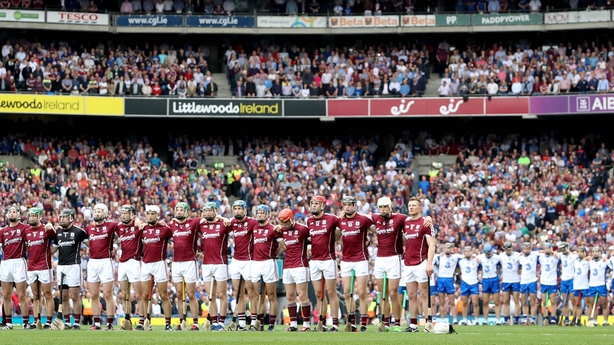 No one could have begrudged Waterford the win, had they been good enough to do it, so long is it since they last lifted Liam in 1959. This though was Galway’s day.

The first half of this All-Ireland final will bear repeat viewing by any fan of hurling such was it’s tempo, intensity and sheer number of talking points.

Johnny Glynn rumbled into the Galway full-forward position to offer a target on the edge of the square, but the Tribesmen were content to pick off points from distance early on.

Waterford’s returning Tadhg de Burca, who missed the semi-final due to suspension, dropped from wing-back into the sweeper role, which saw Darragh Fives in the 15 jersey move to defence as the Deise played with five up.

Aidan Harte was Galway’s spare man at the back, though he had precious little to do early on as his forwards played wreck. They had nine points, some of them of the highest order, on the board before they shot a wide on the quarter-hour mark. 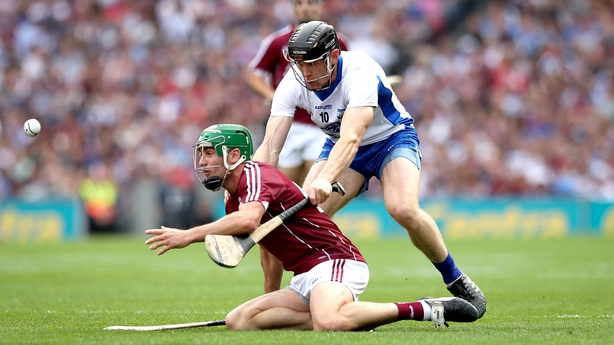 Waterford were second best in every challenge early on and they only stayed in this game - and at stages it looked as though they were going to be blown away - thanks to Kevin Moran’s fourth minute goal, the captain leading his men by act and deed.

The touch-paper was really lit on 22 minutes when Kieran Bennett, a late inclusion at wing-back ahead of the selected Darragh Lyons, found the Hill 16 net from a long ball in off the Cusack Park park touchline.

His brother Stephen was loitering around the square and seemed to put keeper Colm Callanan off and the sliotar bounced between the two of them and across the line.

Shane Bennett went off injured shortly afterwards, Maurice Shanahan coming off the bench to replace him, robbing Waterford manager Derek McGrath of one of the impact subs he would have liked to use later in the game. 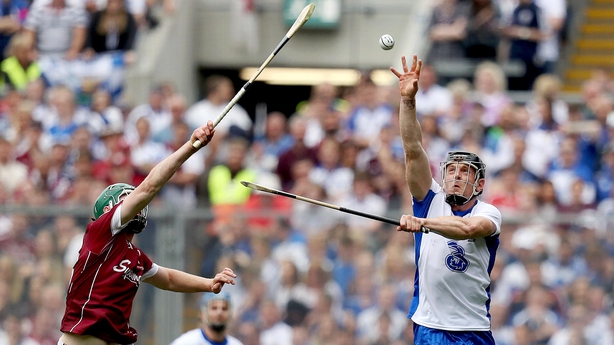 Every Galway player from midfield up, seven players, bar Glynn got on the score sheet before the break. Conor Whelan had been well shackled by Noel Connors up to the half-hour mark when he got free and shot a sensational point.

It looked as though the teams would go in level, but referee Fergal Horgan, who used the advantage rule more than the whistle, awarded a free which Canning slotted to give the Tribesmen a 0-14 to 2-07 interval lead.

Seven minutes after the restart Waterford pushed into the lead for the first time thanks to a Pauric Mahony free.

They had the chance to push two up, but Moran got caught in two minds close to the target and the ball went wide. 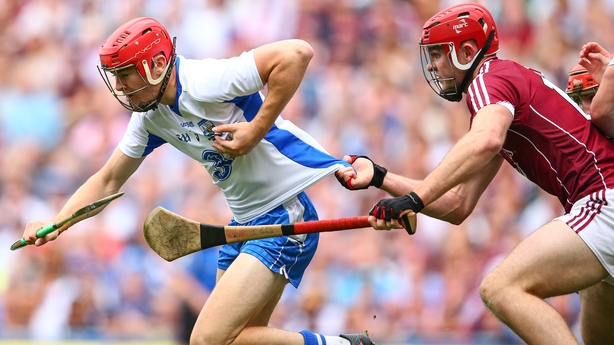 This was heavily punished as Galway clipped the next three scores, two from substitute Niall Healy, a free from annoying and another from captain fantastic David Burke.

Waterford chipped away thanks to frees from Mahony, but they couldn’t get back any closer than two points.

Three points in four minutes in the closing stretch as they really began to flex their muscles and dominate in the air and on the ground saw the Tribesmen break for home.