For the third year in a row at the Aviva Stadium, it took 120 minutes (and this time a shootout) to separate the best two sides in the Airtricity League Premier Division.

Niclas Vemmelund’s towering 94th-minute header looked like it had settled this instalment of an attritional trilogy, but Achille Campion rose from the bench to equalise nine minutes from time.

It went to penos, and after Mark McNulty palmed away Michael Duffy’s effort, Sadlier held his nerve to wrap up a first-ever double for the Leesiders and plunge the Lilywhites into despair.

Fans filled the Dublin air with song, and smoke – both sets of supporters sparked up flares before kick-off –  in a lively atmosphere

— Soccer Republic (@SoccRepublic) November 5, 2017Dundalk had failed to beat the Leesiders in their five previous encounters and looked to set the pace early on but it was Cork who threatened first in a frantic opening ten minutes.

Vemmelund swung at fresh air when trying to boot clear and Sheppard tore after the loose ball, his cross floating into the arms of Gary Rogers.

The lively Jamie McGrath then stung Mark McNulty’s fingertips with a low drive inside the Cork area before a short-corner routine caused panic in the Lilywhites’ defence. Sheppard stuck his left peg out to divert Stephen Dooley’s low cross goalwards; Rogers scrambled away with his feet.

Sheppard’s clever running down the channels was unsettling the Lilywhites. Vemmelund cleaned out the attacker in the left corner to cough up a cheap free-kick.

Robbie Benson’s clever pickout then found Duffy, who twisted and turned before drilling low at McNulty, but it was the league champions who looked more likely.

On 18 minutes, Rogers pulled off a stunning double save. Dooley, fizzing with energy, drove at the Dundalk defence and drew a decent save from the stopper who sprung to his feet and somehow clawed away Sheppard’s volleyed rebound.

The mercurial Patrick McEleney had been subdued in the early exchanges but he offered a glimpse of his class with a gorgeous through ball for David McMillan, who couldn’t get enough purchase on his attempted lob of McNulty.

It was relentlessly busy.

The simmering dislike these two hold for each other briefly bubbled to the surface when Alan Bennett and Rogers exchanged a couple of shoulder barges after the keeper gathered a free-kick.

And just before the half-hour mark, there was another big chance. McNulty couldn’t hold Duffy’s 25-yard rasper but McMillan, contorting his body to deal with the awkward bounce, scuffed the rebound wide.

Dundalk had been patchy in the opening period but they re-emerged with more fluidity and purpose. Two minutes after the restart, they should have led.

Benson controlled Dane Massey’s inside ball with one touch and then looped a volley across the face of goal with the next. Green bodies scuttled desperately to extinguish the danger and it looked like McMillan was going to nod home the bouncing ball after Jamie McGrath’s knockback. Conor McCormack bundled it away and the Leesiders survived.

It was better from Dundalk though. Their passing was crisper, sharper, and as they starved their opponents of possession, they also nullified their threat and isolated Sheppard.

This time Gartland (presumably not a fan of McNulty’s singing voice) gave the keeper a needless shove after he caught a corner. Finger-pointing and chest-bumping ensued but it didn’t disrupt the growing Dundalk momentum. 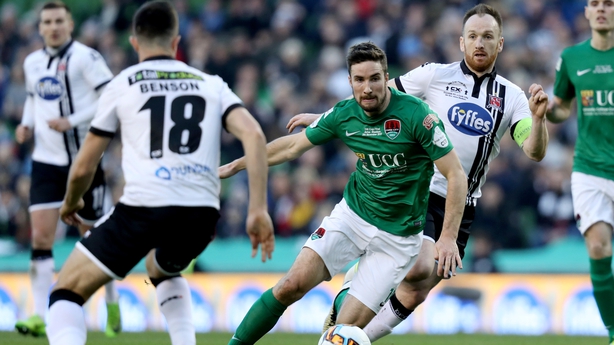 In a Cork breakaway, Sheppard spun Vemmelund and appeared to be dragged down by the big Dane – who was the last man. No foul said Paul McLaughlin, with Cork’s rage almost heightened beyond comprehension when Benson’s header at the other end forced McNulty into a decent save.

Dundalk stayed patient. Cork remained resolute. Duffy skipped past Steven Beattie in the 78th minute but had his cross charged down; Shane Griffin responded with a gutsy break down the left.

A marvellous piece of Duffy skill near the left corner flag in the 87th minute left Beattie bamboozled and earned Dundalk a corner. McNulty spilled the dropping ball and Gartland almost turned it back into the danger area. The pressure kept building but Cork wouldn’t crack.

At the death they almost snatched it. Dooley dug out a cross from the left, Sheppard headed it back into the six-yard box and with Cork players queuing up, Ryan Delaney back-heeled towards goal – via the thigh of Griffin. The green-clad Cork fans were ready to erupt but Rogers emulated his first-half brilliance with an astonishing stop, arching backwards to scoop away the danger.

Yet again, we headed for extra-time. But it didn’t take long for the deadlock to finally be broken.

In the 95th minute, Duffy’s inviting free-kick was thumped home by the rising Vemmelund. The flares and the smoke and songs of the Dundalk contingent cut through the Lansdowne Road sky.

Cork dusted themselves down and came again. Sadlier pinged a 20-yard strike wide, Caulfield barked instructions from the touchline.

On 111 minutes, their prayers were answered.

Sheppard lifted a ball over the top to Campion, only on the pitch 13 minutes as a replacement for Garry Buckley. He judged his run to perfection, and with Dundalk heads turning to the linesman, the Frenchman controlled it on his chest and lashed a low finish past Rogers.

Now the champions’ tails were up. Campion had a crack from 20 yards after Sheppard’s header dropped to him but his strike flew into a sea of Dundalk bodies. A throaty roar went up as Cork smelled blood but they ran out of time. It was the lottery of spot-kicks.

Both sets of players whipped up their fans at either end of the ground as they sought any advantage they could to win this exhausting arm wrestle. The coin toss fell the way of Dundalk, and the penalties were kicked into their mass of fans.

Sheppard, McMillan, Bolger, O’Donnell, Conor McCormack, Benson, and Beattie all obliged before Duffy’s effort was read, and saved, by McNulty.

That left Sadlier with a kick to win the cup. He rifled it to the net; the double is Cork’s.