Tipperary U20 manager Liam Cahill believes his side have fed off the energy around the county's triumphant seniors ahead of their own All-Ireland final this weekend.

On Saturday, Tipp meet Cork (6pm) in a rematch of the Munster final, a game settled by a late Jake Morris goal, and one Cahill thinks also helped to inspire the seniors ahead of their own semi-final comeback against Wexford.

"Both campaigns have been great, U20 and senior. We've both been kind of working off one another and using both teams as motivation for our success to date," he told RTÉ GAA correspondent Brian Carthy.

"The Munster final was a really exciting game and one that went right down to the wire. It was a great spectacle for the U20 grade.

"It was the week leading up to the Wexford senior game with Tipperary as well that really ignited everybody involved and the Tipperary people.

"We went to Croke Park with a little bounce in our step after that Munster U20 final and pulled out one of the greatest performances I believe a Tipperary team ever had in Croke Park against Wexford, and now we're All-Ireland champions."

Morris also came on in the SHC final and scored a point in the comprehensive win over Kilkenny, while forward Jerome Cahill was an unused sub and defender Paddy Cadell is part of the wider panel.

Cahill admits it is invaluable to have "three really top men" with a foot in both camps.

"We're delighted with the experience and exposure these three guys have got and when they come back to me, they come back as leaders. I'm really proud of them.

"Jake has a great year with the Tipperary seniors. He has had an impact every time he came on.

"Jerome has come in at various stages and was probably unlucky not to see game time in the final on his performances to date.

"Paddy has been on the panel all year. I know he's going really well behind the scenes and Liam Sheedy has often spoken to me about Paddy being a real player for the future."

Jake Morris with a match winning goal for Tipperary! pic.twitter.com/KIJonrcA7o

Morris' late winner in the Munster final was the second time in a row Tipp had snuck a tight encounter against Cork, they did the same in last year's U21 All-Ireland, reversing a hammering in the provincial decider.

"Every time we meet we seem to bring the best out of one another and Saturday will be no different," said Cahill.

"That's what comes about when these two teams meet. They've met on numerous occasions at minor and U20 level.

"I think it will be a great game, a real battle and it will go right down to the wire.

"No disrespect to any other team in the competition, I think the two best teams are in the final on Saturday.

"After the Munster final I had a feeling we would be seeing Cork again and I'd say they were thinking the same." 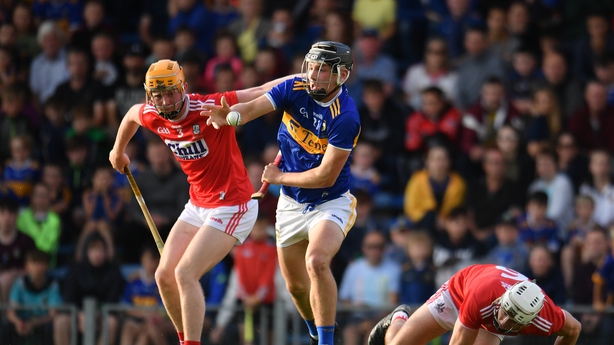 Tipp hit eight goals in their semi-final cruise past Wexford while Cork were six-point victors against Leinster champions Kilkenny.

Cahill doesn't expect anything like the same return at the Gaelic Grounds but backs his forwards to deliver the goals that will likely be necessary to secure back-to-back titles.

"Wexford didn't really perform on the day but we came at such a high level we didn't allow them to perform," he reflected.

"We showed them that sort of respect as well, that we didn't come complacent and not go about our business properly.

"It's very pleasing when you see chances being created and put away but we will have to create chances again on Saturday.

"We definitely won't get as many and whatever chances we get, whether it's one, two or three we have to be able to take them.

"I'm happy that if we do create the chances, we have the firepower, the players that can put them away."