Ireland's economy will contract by 8% in 2020 and expand again by 6% in 2021 as the coronavirus pandemic takes its toll, according to the European Commission's latest economic forecast.

The economic uncertainty has been compounded by "specific" Irish factors, such as Brexit and changes in international taxation, the outlook says.

Overall, Ireland's unemployment, deficit and debt levels will rise, but there are some consolations, such as the performance of the Irish pharmaceutical and medical sectors.

Unemployment is expected to rise to 7.5% this year but recover to pre-crisis levels by the last quarter of 2021, the report says.

The Commission's spring economic forecast predicts the pandemic will trigger " very severe socio-economic" consequences for the global and EU economies, with the EU entering a recession of "historic" proportions in 2020. 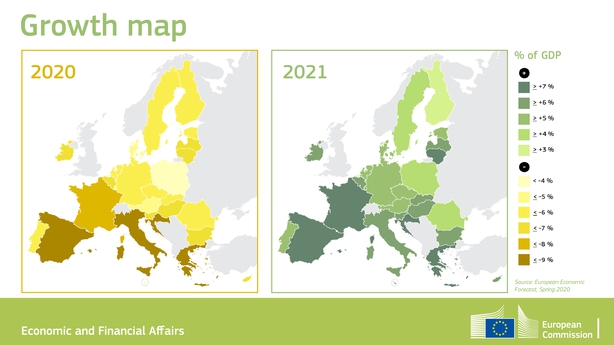 The onset of the pandemic changed Ireland's economic activity "dramatically", from a 5.5% real GDP growth performance in 2019 and the country entered 2020 on "a strong economic footing".

The report states that private consumption is due to shrink by 9% this year and recover by 4% next year.

"Ireland has banned construction works since late March, while investment in equipment and other areas is likely to be postponed or even lost," the forecast says.

"The negative outlook is corroborated by confidence and other activity indicators, such as credit card use, which suggest a large contraction in economic activity since the lockdown." However, the negative outlook is offset by more positive predictions, such as strong export growth in the pharmaceutical and medical products sector.

"In addition, exports of information and communication goods and services may also prove resilient," the Commission report says.

However, the activity of multinationals remains difficult to predict, says the report, and "can affect GDP figures in either direction".

Ireland is expected to experience negative inflation of -0.3% due to the sharp fall in oil prices, although food and necessities are expected to rise in price. The Commission predicts moderate inflation of 0.9% in 2021.

Despite the surge in unemployment, the Commission expects the Irish labour market to weather the storm.

In early 2020, the unemployment rate stood at 4.8%. The report notes that since the end of March the lockdown has prevented at least one fifth of the workforce, especially in the retail, accommodation and recreation sectors, from working. 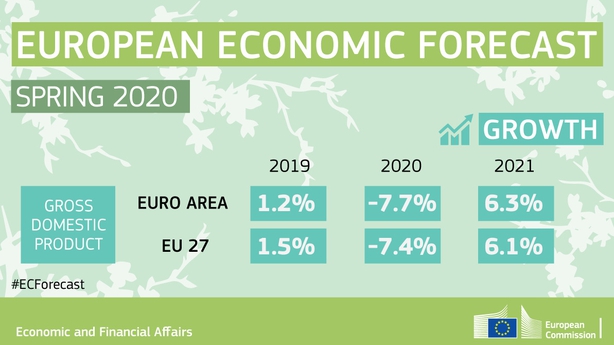 However, the report says the increase in unemployment will be "relatively muted" thanks to the Government's income support schemes.

As such, the unemployment rate is expected to rise to 7.5% amid losses in consumption and exports.

"The rebound of the economy in 2021 is forecast to bring employment gradually back to pre-crisis levels by the last quarter of 2021, resulting in an average unemployment rate of 7% in that year," the report says.

While the Government had managed a surplus of 0.4% of GDP in 2019, due to a "booming economy, which brought about strong increases in tax revenues and social security contributions and a continued fall in the interest burden", the economic slump is expected to have a "strong negative impact on the general government balance in 2020," the Commission stated.

The Commission suggests that wage subsidies to protect jobs, welfare payments and healthcare support will raise current expenditure costing the Exchequer around 2% of GDP.

"Risks to the fiscal outlook are elevated and reflect various sources of uncertainty such as: the outlook for growth and jobs, the final cost of the fiscal expansion to counter the crisis and the changes in the international taxation environment," the report concludes.