The parents of Nóra Quoirin have met officials from the Department of Foreign Affairs in Dublin this morning.

Meabh and Sebastien Quoirin said they want the Irish Government to help them to secure a Malaysian inquest into the death of their daughter.

The couple described the meeting to RTÉ News as "positive".

Authorities in Malaysia carried out a post mortem examination into the teenager's death, however the full report has not yet been released to the family.

The 15-year-old vanished from a house in the Dusun rainforest resort, where she had been on holiday with her family.

Her body was found ten days later, just 2km from the house, after intense searches involving hundreds of search and rescue workers.

A preliminary autopsy found that Nóra died from intestinal bleeding, possibly caused by hunger or stress.

In an exclusive interview with RTÉ News yesterday, Meabh and Sebastien Quoirin said they believe there was a "criminal element" in the disappearance and death of their daughter.

Nóra's parents said that they were determined to get "truth and justice".

As well as speaking to Irish officials today, it is understood that French authorities have also said to the Quoirins that they will assist them in pushing for an inquest into their daughter's death.

Nóra travelled to Malaysia on an Irish passport through her mother Meabh, while her father Sebastien is from France.

"I think we will be living with the horror of what happened in Malaysia for the rest of our lives." 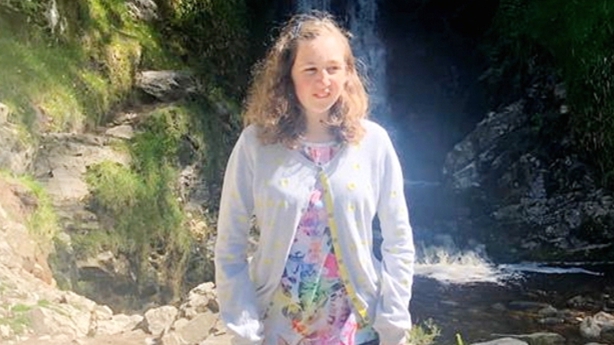 Watch the full interview on the RTÉ Player

The family has been living in London for the past 20 years.

During the investigation in August, police in Malaysia treated the teenager's disappearance as a missing persons case and said they found no signs of foul play.

Nóra was born with holoprosencephaly, a disorder that affects brain development. Meabh and Sebastien Quoirin said that it would have been "impossible physically, mentally to imagine that she could have got any distance at all".

She said: "For us something very complex happened. We have insisted from the beginning that we believe there was a criminal element to what happened.

"While a post mortem, when it comes through, may give us answers, and has already given us some basic answers around what caused Nóra's death, it doesn't explain any of how she could possibly have got to where she was found."

The Quoirins said they believe it was going to be difficult to get "the whole truth", but they said it was important to try.

The couple said that they are still a "family of five" even with Nóra gone, but the loss of their eldest daughter will live with them forever.

"I think we will be living with the horror of what happened in Malaysia for the rest of our lives."