President Michael D Higgins has begun his three-day State visit to Germany, with a formal welcome by the German President Frank-Walter Steinmeier at the SchlossBellevue residence in Berlin.

President Higgins expressed his thanks to his counterpart for Germany's "practical" support for Ireland during the Brexit negotiations.

Mr Steinmeier said Germany would continue to stand by Ireland, saying that the Irish border was not just an Irish issue but a European issue.

Asked if Germany would continue to support Ireland even as a no-deal scenario approached in the autumn, given the claims aired during the Conservative Party leadership race in the UK that German Chancellor Angela Merkel would "do a deal" with the new prime minister, President Steinmeier said he hoped those UK politicians who "fantasised" about a no-deal Brexit would not increase.

The expectations of a new prime minister could not be reduced to the views of Germany alone, President Steinmeier said, but of 27 European Union member states as a whole.

However, given the failure of the so-called Spitzenkandidat, or lead candidate, process in the nomination of Ms Von Der Leyen, both men said that European voters wanted to feel "included" in the electoral process.

President Higgins and his wife Sabina visited the Brandenburg Gate before meeting the Governor Mayor of Berlin Michael Muller and attending a Bord Bia reception showcasing Irish agri-food sales to Germany in the Rutz Restaurant.

President Higgins also laid a wreath at the memorial of victims of War and Tyranny in the Neue Wache national monument.

President Higgins lays a wreath to the victims of War and Tyranny at the Neue Wache national monument in Berlin pic.twitter.com/YPc69tPKrW

In an article in today's Frankfurter Allgemeine newspaper, President Higgins refers to Brexit and acknowledges "the solidarity that has been offered to our island at this difficult time".

The President, who is also accompanied by Tánaiste and Minister for Foreign Affairs Simon Coveney, met Chancellor Merkel at the Federal Chancellery, before attending a state dinner hosted by President Steinmeier. 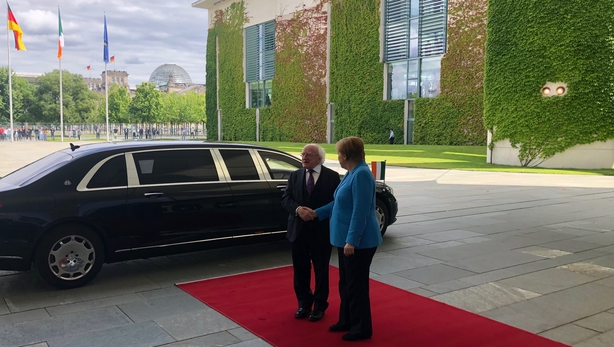