A woman gave birth to a baby girl on board a commuter train travelling from Galway to Dublin yesterday.

Two nurses and a GP who were travelling on the train assisted the woman with the delivery.

The girl was born on the 3.05pm train from Galway to Dublin's Heuston Station at around 5pm, as the train was approaching Kildare.

Dr Alan Devine said the women was terrified but that the two nurses who were travelling on the train, along with a member of Irish Rail staff, calmed the situation and gave the woman great support.

He said she did really well given the difficult circumstances of the delivery, adding that she and the baby were now doing well.

They were taken by ambulance to the Coombe Hospital following the birth.

Iarnród Éireann have paid tribute to the passengers and staff who assisted the mother in what they said must have been a stressful situation.

The company said that due to the unique nature of the delivery they would be offering free travel for the baby girl until she is an adult.

Irish Rail Catering Assistant, Emma Tote said she was passing the toilet on the train when she heard screams and when she pushed open the door, a young woman was inside saying that she thought she was in labour.

Ms Tote said she informed the driver, called an ambulance and asked if there were any medics on board. It was then that two nurses and a GP came to the assistance of the woman.

She described how the nurses held the mothers hand and counted the times between her pushes while the doctor asked for gloves and other items to make the area sterile.

She said she used her catering trolley to block access to the area and that other passengers gave jackets, blankets and other items to help protect the woman’s privacy as she gave birth.

Speaking to RTÉ News, Ms Tote said she and everyone else who witnessed the birth were relieved that the baby was okay.

"I'm really delighted that I saw the little baby, and the moment that she took her first breath was the most beautiful thing ever," she said.

Speaking on RTÉ’s News at One, Dr Devine said he was "terrified" of getting things wrong because he is "far removed" from dealing with births in a sterile situation, with the assistance of midwives, let alone on a train.

Dr Devine is currently working with the VHI Hospital@Home service in the west of Ireland.

He said the situation was totally chaotic, but that the mother did "so well", particularly because she was travelling alone and did not have any drugs during the birth.

Dr Devine told the programme that he was unaware of what was going on until the train stopped at Kildare Train Station.

When he realised the train had not moved for around ten minutes, he asked the lady opposite him what was happening and she, randomly, asked him if he was a doctor.

When he arrived at the carriage where the mother was in labour, he discovered a security guard blocking the door to the carriage with a towel, which he said was good thinking on his part.

Dr Devine said he was "late on the scene" and the woman was in good hands and being assisted by three women, including one Irish and one American nurse.

He said he could not commend the three women who helped her and had calmed the situation down enough, adding that they "were running the show".

Dr Devine said he also listened to and was calmed by the American nurse who counted the contractions loudly and kept the situation calm.

He said the baby came out about 20 minutes after his arrival and he was "just there to catch the baby when it came out". 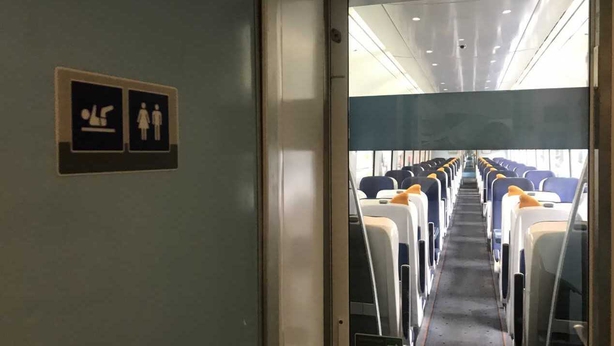 Dr Devine said that all the passengers were very respectful of the situation and shouting out congratulations to the new mum.

He went with the mother to the Coombe, adding that he has been in touch with the woman today and everything was going well.

Dr Devine added: "I would be far removed from dealing with this kind of situation, at the moment, let alone even in my training when I would have assisted with births and that kind of thing, it would have been in the hospital and totally guided by the midwives and everything in a nice sterile environment, as you can imagine.

"Whereas this was totally chaotic and it was just kind of this is happening whether we like it or not, so let's just do the best we can."

Preparation over, Santa Claus is coming to town